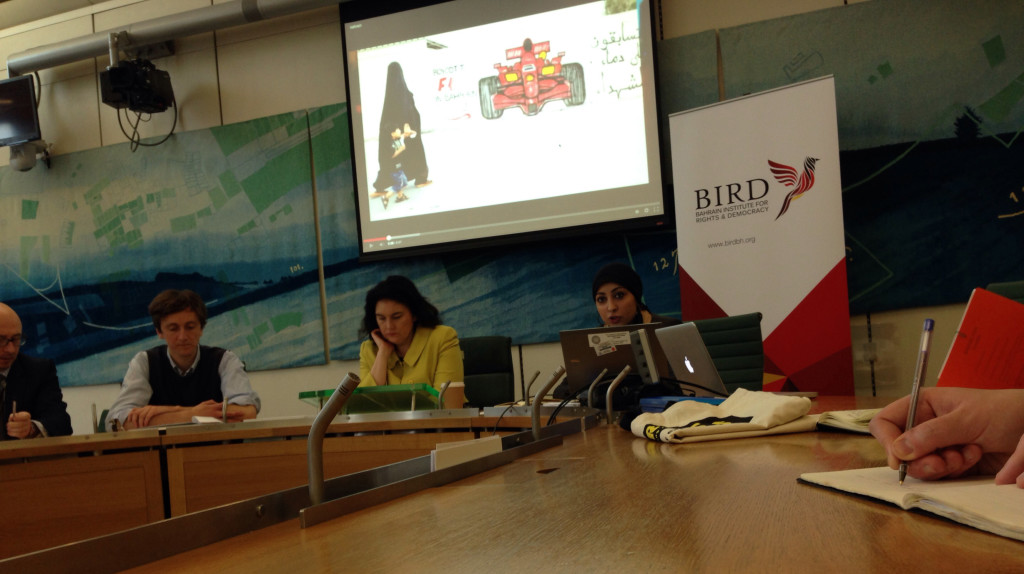 Katy Clark took the opportunity to introduce a Early Day Motion 1194 which calls on the UK government to oppose the 2014 Formula One race in Bahrain “due to ongoing human rights violations.” The EDM also recalls concerns over the sexual abuse in custody of Rihanna al-Mousawi who was detained at the Bahrain Formula One track in 2013. It also recalls concerns over the extrajudicial killing of protester Salah Abbas during the race in 2012 by security forces. 25 MPs have signed the EDM to date.

Acting President of the Bahrain Centre for Human Rights, Maryam al-Khawaja, began the discussion by highlighting the ongoing grave human rights violations in the country. She highlighted the dangers of the new Gulf Cooperation Council Security Agreement that “infringes upon the basic rights of all GCC citizens.” Ms. Khawaja furthermore highlighted the stringent environment and reprisals faced by human rights defenders in Bahrain and refuted the speech made by the Bahrain Foreign Minister in Geneva earlier this month noting:

“Bahrain uses terrorism as an explanation to justify the crackdown against individuals in the country, whilst attempting to convince F1 that it is safe to race in the country. Why are they hosting the F1 if there is terrorism in Bahrain? F1 would not go to Bahrain if that was the case.”

OECD Complaint Launched Against Formula One

Daniel Carey, who headed a legal team to file an OECD complaint to stop a 3 million shipment of tear gas canisters to Bahrain, took the opportunity to announce that an OECD complaint has been filed by Americans for Democracy and Human Rights in Bahrain against Formula One Management, sponsors and teams in the UK.  The complaint alleges that the defendant organisations have not mitigated the human rights impact caused by their actions in the country. The complaint has been filed with the United Kingdom Department for Business, Innovation, and Skills in London, which is the UK’s National Contact Point for the OECD Guidelines.

According to the 2011 OECD Guidelines for Multinational Enterprises, organisations have a responsibility to “… avoid causing or contributing to adverse human rights impacts and address such impacts when they occur.” Organizations falling under OECD jurisdiction additionally must “seek ways to prevent or mitigate adverse human rights impacts that are directly linked to their business operations…” and “carry out human rights due diligence…” as appropriate to their involvement with abuses.

Mr. Carey also highlighted  ‘irresponsible statements’ made by Bernie Ecclestone in the past regarding the staging of the race in Bahrain.

“We don’t go anywhere to judge how a country is run. I keep asking people what human rights – I don’t know what they are. The government here are stupid to put this race on. It is a platform for people to use protesting.”

Dorset band, Magic Drum Orchestra, used the event to announce that the have firmly rejected an invitation from Bahrain to perform at the Formula One over serious concerns about the human rights situation in the country.

On receiving the booking enquiry from the Bahrain International Circuit, the band investigated the situation there and were concerned by reports from NGOs about the human rights abuses committed in the country. A member of the band visited Bahraini activists in London who were gathered to mark the anniversary of the uprising. On hearing about the violent crackdown on peaceful protests, including imprisonment, torture and teargas fired into people’s homes, the band unanimously decided not to pursue the offer. They dedicated a song to the people of Bahrain as part of a recent performance to a packed out Electric Palace in Bridport, during which a police riot van arrived on the scene to investigate the noise. The song was the bands own interpretation of Rage Against the Machine’s ‘Killing in the Name’, thought to have been originally written about state violence. They added a new introduction, to the rhythm of ‘Down Down Hamad’ which Bahrainis often play during protests calling for democracy.

Glyn Bush, of Magic Drum Orchestra, said “playing in Bahrain would have been our first international performance, but we felt that pursuing the offer to play would be taking the side of a repressive regime instead of supporting the people. We urge other musicians, drivers and racing fans to take a stand for democracy and human rights by boycotting the event”.

“We have discussed your booking enquiry for the Bahrain Formula One. The Magic Drum Orchestra is a British percussion band made up of over 20 people from the county of Dorset ranging in age from 15 – 55 and including teachers, conservationists, sports instructors, gardeners, shop assistants and students. We recognise that Britain and Bahrain have had a close relationship for 200 years, including Britain supplying many millions of pounds worth of arms and sending a large delegation of representatives from arms companies, the government and royal family to celebrate this relationship during the GREAT British Week held in Bahrain earlier this year.

However, we are extremely concerned about human rights violations in Bahrain and feel that performing at the Grand Prix would be taking the side of a repressive regime instead of supporting the people. We find it unacceptable to detain, torture and kill people, and strongly deplore the violent crackdown on peaceful protest that has led to thousands of Bahrain citizens being imprisoned.

We therefore decline your offer. We also encourage performers, drivers, Formula One fans and British citizens to boycott the event”.

Bahrain researcher at Human Rights Watch, Nicholas McGeehan, refuted a statement made by UK Minister of State at the Foreign and Commonwealth Office, Hugh Robertson, that there is ‘undeniable progress in Bahrain.’ Highlighting an upcoming Human Rights Watch report, Mr. McGeehan argued that human rights abuses including torture and arbitrary detention are ongoing in the country. He also shed light on the treatment of children in Bahrain arguing “young men are being dispensed through a justice system with no justice. Protesters are thrown in jail after being subjected to non-sensical judgements whilst the manner in which security personnel, accused of grave human rights violations, have been acquitted has created a culture of impunity.”