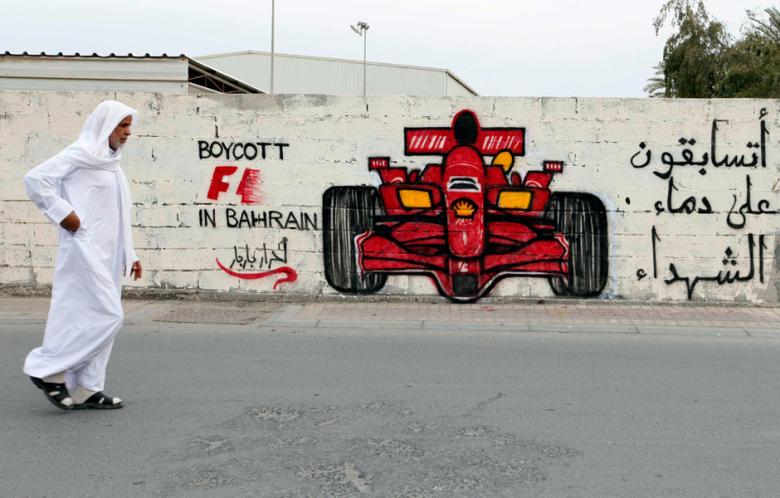 A group of British MPs have tabled an Early Day Motion at the United Kingdom Parliament opposing the staging of the Formula One race in Bahrain. The EDM (1194), sponsored by Labour MP Katy Clark, Jeremy Corbyn, Frank Dobson, John Leech, John McDonnell and Julian Huppert, was tabled following a joint-letter sent by Bahrain human rights organisations to the Formula One governing body calling for the suspension of the race alongside an Ethics Committee inquiry into the decision to hold the race in Bahrain. EDM 1194 notes the killing of protester Saleh Abbas during the race in 2012 and the sexual abuse of protester Rihanna al-Mousawi during her arrest and detention on the day of the 2013 race.

“That this House opposes the staging of the 2014 Bahrain Grand Prix due to ongoing human rights violations in that country; notes that Human Rights Watch’s 2014 World Report highlighted that Bahrain’s human rights record regressed in key areas in 2013 drawing particular attention to arbitrary detention, ill-treatment and torture of activists, prosecution and harassment of government critics and a failure to hold those guilty of human rights abuses to account; expresses deep concern that in previous years Bahrain has implemented a severe crackdown before and during the Grand Prix, restricting freedom of movement of persons in the country, detaining and deporting foreign journalists and conducting mass arbitrary detentions in towns close to the Formula 1 circuit; recalls with concern that previous Grand Prix have coincided with the extrajudicial killing of protester Salah Abbas in 2012 and the arbitrary imprisonment and alleged sexual abuse in custody of protester Rihanna al Mousawi in 2013; further expresses disappointment at the continued failure to hold security forces to account for these abuses, as well as the arrest, detention and torture of 27 employees of the Bahrain International Circuit in 2011; and urges the Government to make strong representations to try and prevent the 2014 Bahrain Grand Prix from going ahead.”

The EDM which was tabled on 17 March 2014 has been signed by 17 MPs from Labour, the Independent Party, the Liberal Democrats, Respect, the Alliance Party, Plaid Cymru and the Green Party.

MPs have also tabled two EDMs prior to 1194 illustrating growing concerns at a UK Parliamentary level over the deteriorating human rights situation. EDM 1080 calls on the UK government to list Bahrain as ‘country of concern’ in compliance with the recommendations made by the Foreign Affairs Committee report published in November 2013 noting:

“That this House notes the ongoing deterioration of the human rights situation in Bahrain as observed by multiple international human rights organisations, most recently Human Rights Watch in its 2014 World Report; is concerned by the continued culture of impunity and failure of the Bahraini government to hold individuals accountable for torture, extrajudicial killing and other abuses; believes that the Bahraini government has failed to implement the recommendations of the Bahrain Independent Commission of Inquiry and that this, along with the continued imprisonment of 13 high-profile activists who are serving long-term sentences for making peaceful calls for reform, undermines the chances of a political solution; further notes the recommendations of the recent report by the Foreign Affairs Committee (Fifth Report of Session 2013-14, The UK’s Relations with Saudi Arabia and Bahrain, HC 88), in particular the recommendation in paragraph 214 of that report that Bahrain should be designated as a country of concern, if there is no significant progress by the start of 2014; further believes that this progress has not been made; and urges the Government to designate Bahrain as a country of concern and to make strong representations to the Bahraini government to end its human rights abuses, hold individual human rights offenders accountable and release all prisoners serving sentences that relate to their exercising their rights to free expression and association.”

EDM 901 in December 2013 showed concern about the arbitrary use of arms control equipment in Bahrain noting:

“That this House notes that despite the publication of the Bahrain Commission of Inquiry Report in 2011 which chronicled torture and extrajudicial killing regrets that many violations of human rights continue; is shocked that there are 3,000 political prisoners, children in detention, citizenship removed from activists and arbitrary arrests amongst the many violations of human rights independently reported; and calls on the Government to make the strongest possible representations to the government of Bahrain and to refuse all arms and crowd control equipment exports to Bahrain.”