Bahraini NGOs welcome steps to lift the immunity of official’s accused of torture and call for further restrictions until justice is achieved. 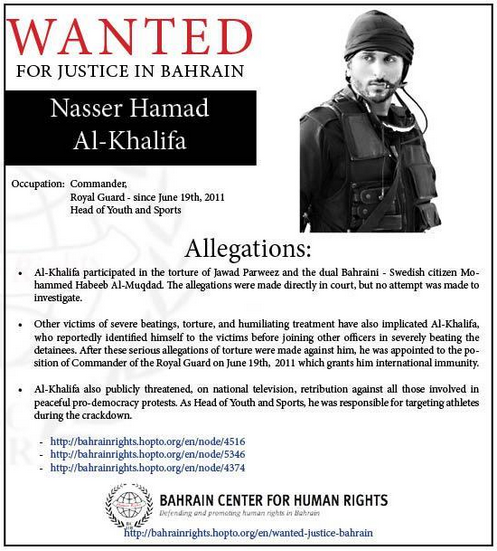 Actions taken to lift the immunity of Nasser Hamad Al-Khalifa through judicial review in the UK are an important step to end Bahrain’s culture of impunity that has been a longstanding problem in Bahrain. This was highlighted in the BCHR ‘Wanted for Justice’ Campaign. This campaign lists the names of over 50 officials allegedly involved in serious human rights violations in Bahrain, including Nasser Al-Khalifa. Torture, as an international crime cannot be protected using state immunity. Local amnesty decisions, such as Bahrain Decree 56 in 2002, do not apply internationally where the principle of universal jurisdiction should be upheld at all levels. Systematic torture continues in Bahrain despite claims of reform and foreign assistance. The allegations made against Nasser Al-Khalifa are based on several consistent testimonies by prisoners of conscience whose cases have been documented by NGOs, BICI and family members. You can read BCHR’s case against Nasser Al-Khalifa here.

The case against the UK Public Prosecution challenges its decision that Nasser is immune from prosecution on torture allegations in his capacity Head of the Bahrain Royal Guard.

Sue Willman, partner in Deighton Pierce Glynn, representing the Bahraini refugee Claimant stated: “The case raises important issues about whether foreign officials should be exempt from investigation, arrest and prosecution for serious crimes. The court has made it clear there is no reason why the public should not be informed about this challenge to the U.K. government’s approach.”

Maryam Al-Khawaja, Acting President of the Bahrain Center for Human Rights stated: “For too long there has been a culture of impunity enjoyed by human rights violators in positions of power at all levels throughout the Government of Bahrain. Time and again, we have seen that the lack of an independent judiciary makes justice unattainable in Bahrain. The local culture of impunity is driven by the international immunity enjoyed by the authorities, and Europe shares a responsibility to hold these human rights violators accountable for their actions. We hope that this case against Nasser Al-Khalifa represents the beginning of a new era of accountability so that justice may be realized for the people of Bahrain.”

John Horne from Bahrain Watch commented, “The UK government has a long, dark history of enabling state violence in Bahrain and protecting both British and Bahraini officials responsible. This case is an important step in challenging this longstanding impunity and moving towards full transparency, accountability and justice.”

On Friday, 09 May 2014, the identity of Nasser Hamad Al-Khalifa was made public as the prosecution service of England and Wales faces a legal challenge regarding the status of Nasser’s immunity from prosecution for torture.

Submitted by a Bahraini torture survive, known only as FF to preserve anonymity and protect his family from possible reprisals, the judicial review challenges a previous ruling from the Director of Public Prosecution (DPP) stating that Nasser has state immunity from prosecution because he is a member of Bahrain’s ruling family.

Nasser Hamad Al-Khalifa is the son of the King of Bahrain and a regular visitor to the United Kingdom (U.K.). As chair of Bahrain’s Olympic Committee, Nasser represented Bahrain at the opening ceremony of the London 2012 Olympics. At that time, the European Center for Constitutional and Human Rights (ECCHR) and the Bahrain Center for Human Rights (BCHR) wrote to the British Prime Minister and Foreign Secretary William Hague asking for the withdrawal of Nasser’s Olympics visitor’s visa. ECCHR and BCHR sent a detailed dossier summarizing publicly available information regarding Nasser’s involvement in torture in Bahrain, including witness statements from Bahraini opposition members, and asked for action to be taken. They put the Crown Prosecution Service (CPS) and the War Crimes Team of the London Metropolitan Police on notice of the dossier.

FF is a Bahraini refugee currently living in the U.K. who was detained and tortured in Bahrain. He submitted the case and instructed Deighton Pierce Glynn solicitors to write to the CPS in August 2012 asking for the prince to be arrested and prosecuted during his visit to the United Kingdom. In its reply, the CPS stated that Nasser had immunity from arrest and prosecution. FF applied for a judicial review of the DPP’s decision on 26 October 2012. The review was subsequently delayed to allow court documents to be served to Bahrain’s ruling family informing them of the charges and asking if they would join the case as interested parties, which they declined to do. The trial is expected to take place later this year.

On 09 October 2013, the court, led by Lord Justice Moses, made the attached order (below) permitting the press to obtain redacted court documents from the Administrative Court office. He confirmed that confidentiality restrictions have been removed and made public the previously secret judgment of Laws LJ.

Background to case against Nasser Al-Khalifa

In February 2011, peaceful protesters in Bahrain rallied for greater participation in the political process and an end to human rights abuses. The protests were brutally suppressed by Bahraini security forces. On 15 March 2011, the King of Bahrain declared a state of safety and the first wave of repressive actions by government forces took place. At this time, two opposition leaders in Bahrain made allegations against the king’s son, Nasser Hamad Al-Khalifa. As a result, they were both sentenced to lengthy prison terms on politically motivated charges. Amnesty International and other international rights groups recognize them as prisoners of conscience. A national investigative team established by independent, international experts known as the Bahraini Independent Commission of Inquiry (BICI), published a report in November 2011 detailing torture allegations against Bahraini security personnel and recommended that the government investigations of such allegations and hold security personnel responsible. To date, no such investigation has been initiated or publicized. Meanwhile, Nasser Hamad Al-Khalifa travels frequently to the U.K. and a number of other European states.

·       The Independent: Bahraini Prince may lose his immunity