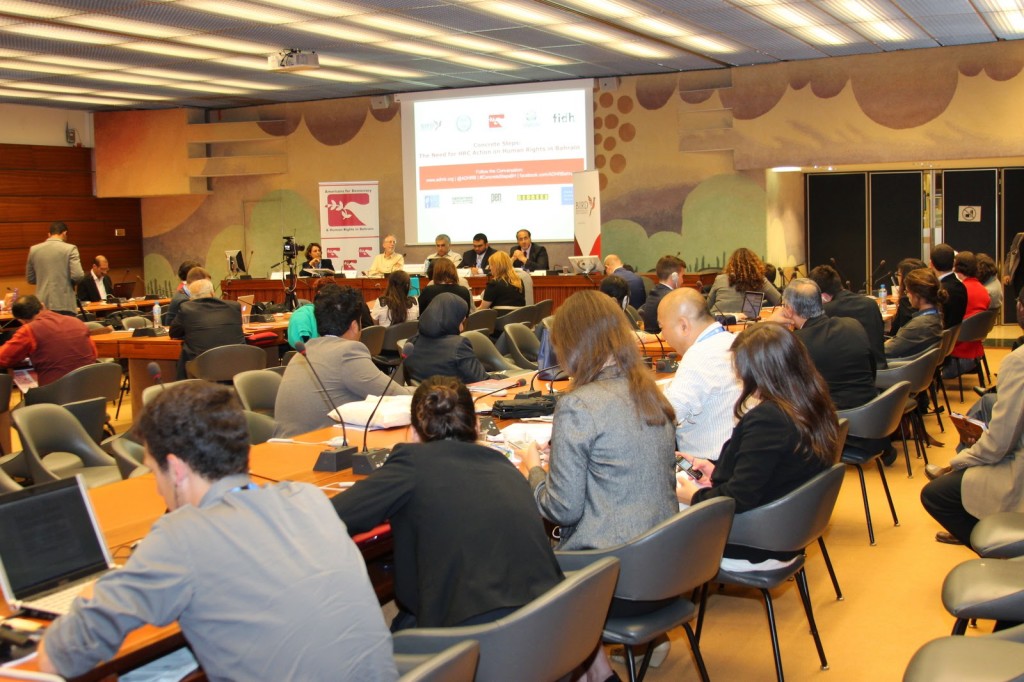 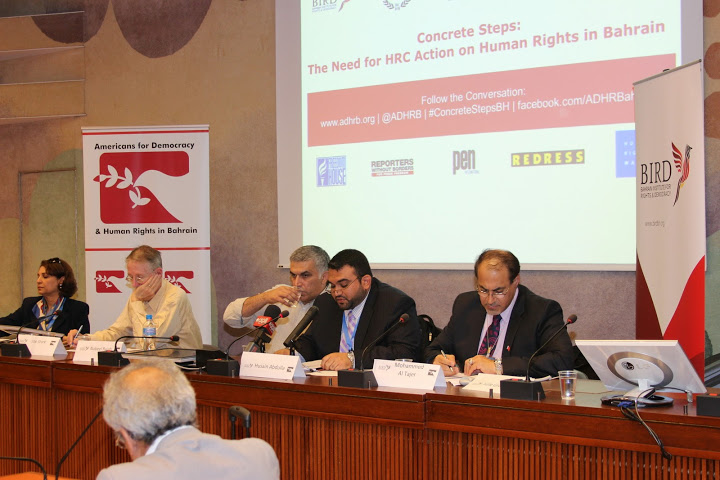 Mr. Abdulla opened the panel by stating that Bahrain had failed to live up to its human rights commitments. “ADHRB welcomed the recent technical mission from OHCHR to Bahrain,” Abdulla said, “yet we remain concerned that the Bahrain government continues to undertake mostly cosmetic changes while continuing to repress human rights.” He noted a trend of “systematic impunity,” especially among government leadership, in Bahrain. “The Member States of the Human Rights Council are in a unique position to correct the human rights situation in Bahrain,” said Abdulla, noting that a recent joint statement at the Human Rights Council was a positive development in that direction. ADHRB would welcome a full OHCHR mandate in Bahrain, as well as a visit by the Special Rapporteur on Torture to the country, Mr. Abdulla said. 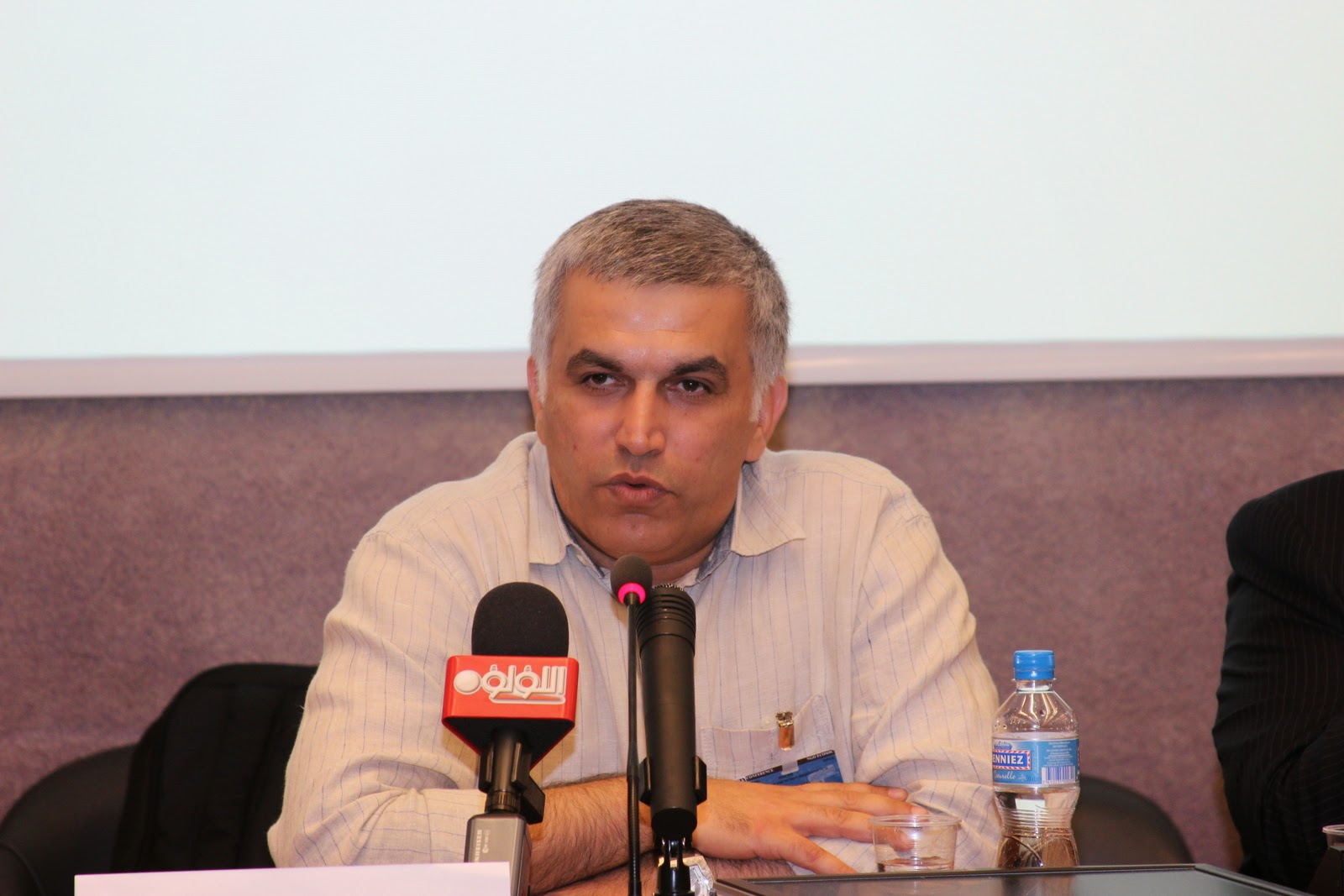 Mr. Nabeel Rajab, a prominent Bahraini human rights activist who recently concluded his arbitrary prison sentence for exercising his right to free expression, stated that he would not have been able to come to Geneva if it weren’t for the intervention of OHCHR. “In the past three years since the crackdown, we’ve seen either complete silence or shy criticism from the majority of the international community,” Rajab said, noting with appreciation the joint statement released last Tuesday but criticizing countries that considered their trade agreements more important than human rights. He especially singled out the United Kingdom, stating that certain actors in the British government worked against the human rights struggle in Bahrain. Nabeel continued by stating that Bahraini law had changed in the years during his imprisonment, noting that it is now illegal to criticize the government. 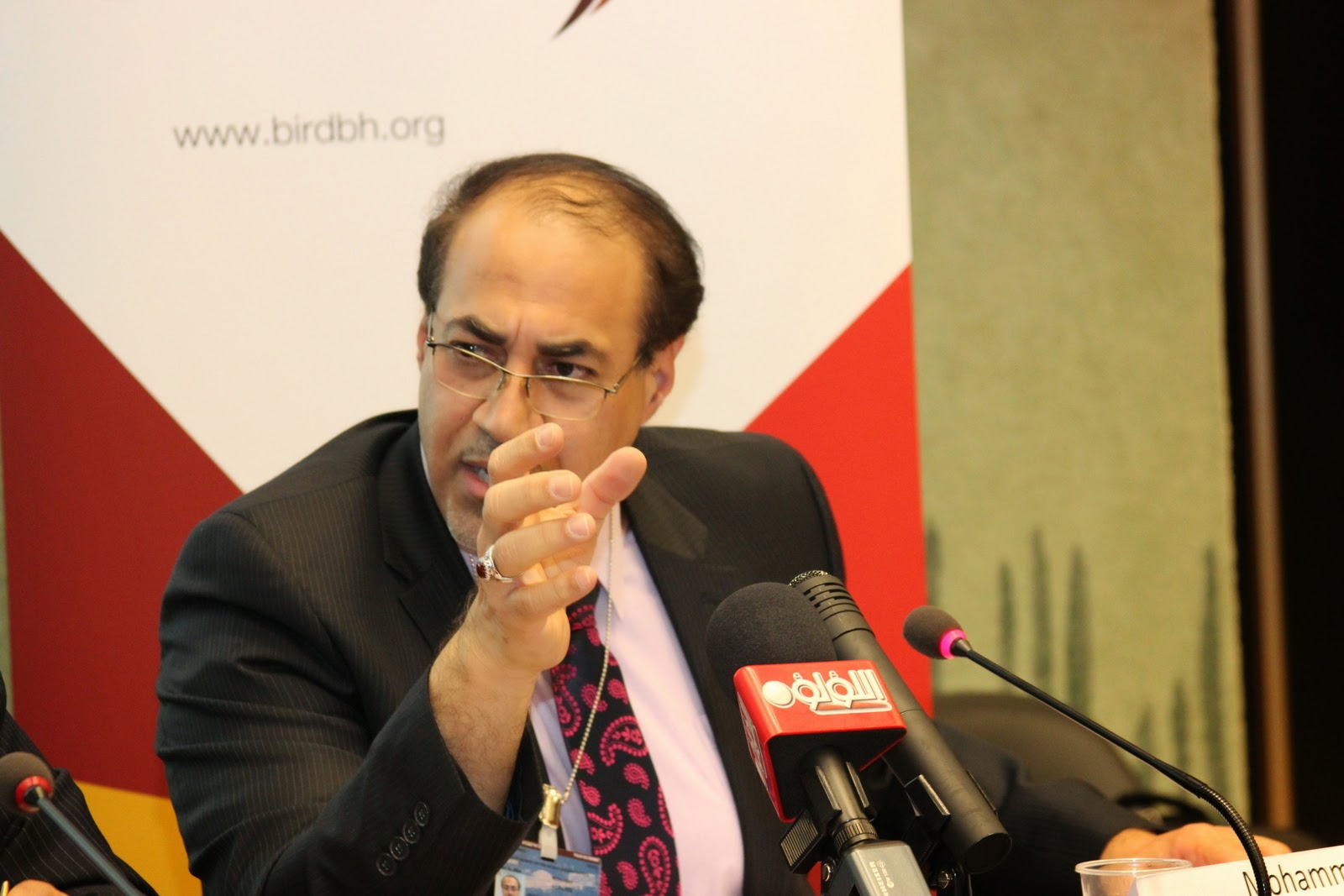 Mr. Mohammed al-Tajer, President of the Bahrain Human Rights Observatory, expressed his concern over corruption in the judiciary system in Bahrain. He gave the example of eight detainees in Bahrain that raised allegations of torture to their lawyers; despite Bahrain’s obligations to investigate those allegations under international law, the court refused to acknowledge the complaints. Al-Tajer noted that, on at least one occasion, a detainee attempting to speak about his torture at court was interrupted by a security officer; on another, a detainee identifying his torturer was thrown out of the court. At no point did the government ever investigate their claims. 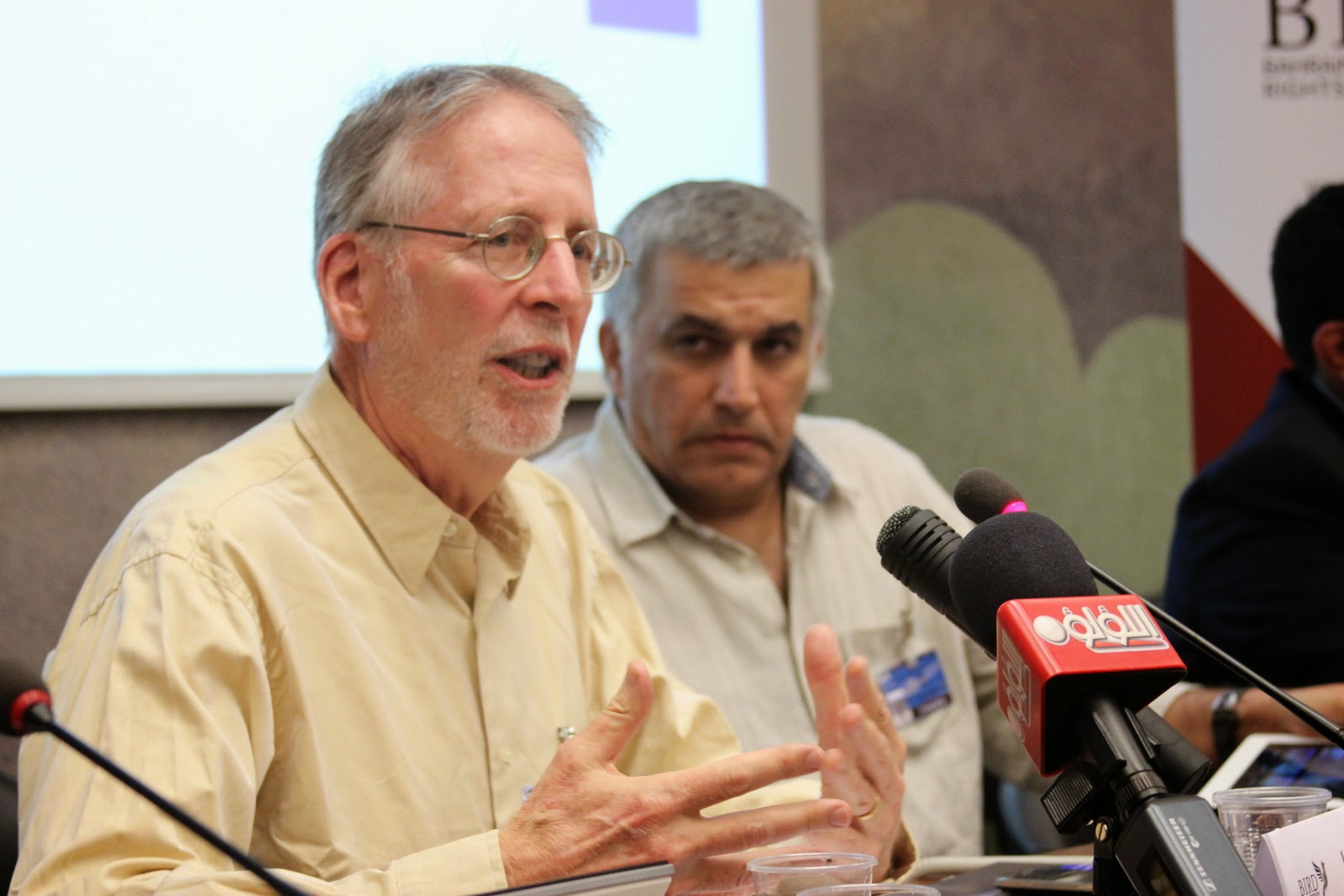 Mr. Joe Stork from Human Rights Watch opened his remarks by stating that he was taken aback by the measures the Government of Bahrain undertakes to rebrand its image as a respecter of human rights. “In the last 3-4 years, Bahrain has become a closed country to NGOs like Human Rights Watch,” Stork said. “The refusal of the government to date to welcome a country office for OHCHR is a testimony to how closed the country has become.” Joe continued by noting HRW’s report on Bahrain, which examines the government’s commitment to the Bahrain Independent Commission of Inquiry to release all political prisoners. The report, which sources primarily from Bahraini judicial opinions, demonstrates how the Government of Bahrain self-admittedly maintains political prisoners. The report additionally addressed accountability in Bahrain, finding that the very few criminal investigations into unlawful deaths resulted in “ridiculous” sentences for as little as two months. Paraphrasing Cheriff Bassiouni, Stork said, “if you call for a republic, you get a life sentence; if you commit murder, you get a few months.” Stork continued by stating that Human Rights Council pressure has worked on Bahrain in the past, and that precedent exists for Human Rights Council action instigating change in its human rights practices. He called for a Human Rights Council resolution stressing the need for Bahrain to implement all of the recommendations of the BICI and to cooperate with OHCHR. 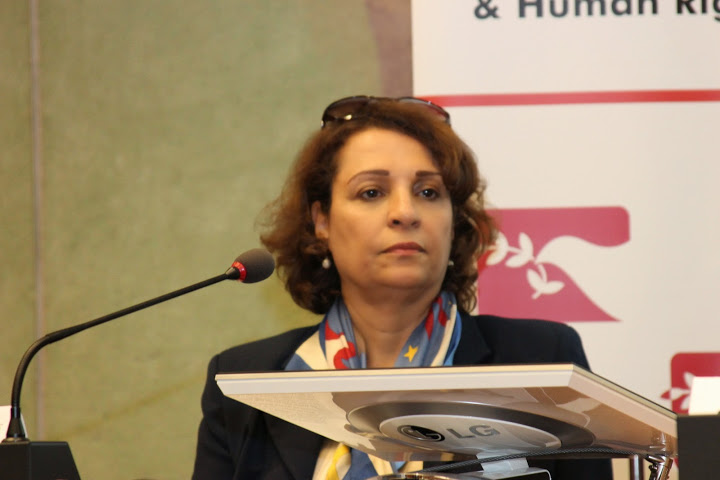 Ms. Esmat al-Mousawi opened with hope, stating that 14 February 2011 saw “thousands of youth” marching in Manama calling for freedom. The government responded to their cries by violently attacking the protesters, resulting in “high casualties” and the destruction of the Pearl Roundabout. The government followed with a campaign of violence against protesters that included propagating a sectarian narrative designed to discredit the democratic movement. During this campaign, the government targeted journalists, torturing and in some cases killing persons for their unbiased coverage of the events. “Social media, the last remaining form of free expression in Bahrain, has been the most recent target of government oppression,” al-Mousawi noted. Despite this, Bahrainis have not stopped their struggle for human rights and democracy. She closed by calling for the international community to force the government to honor its international obligations and human rights commitments. 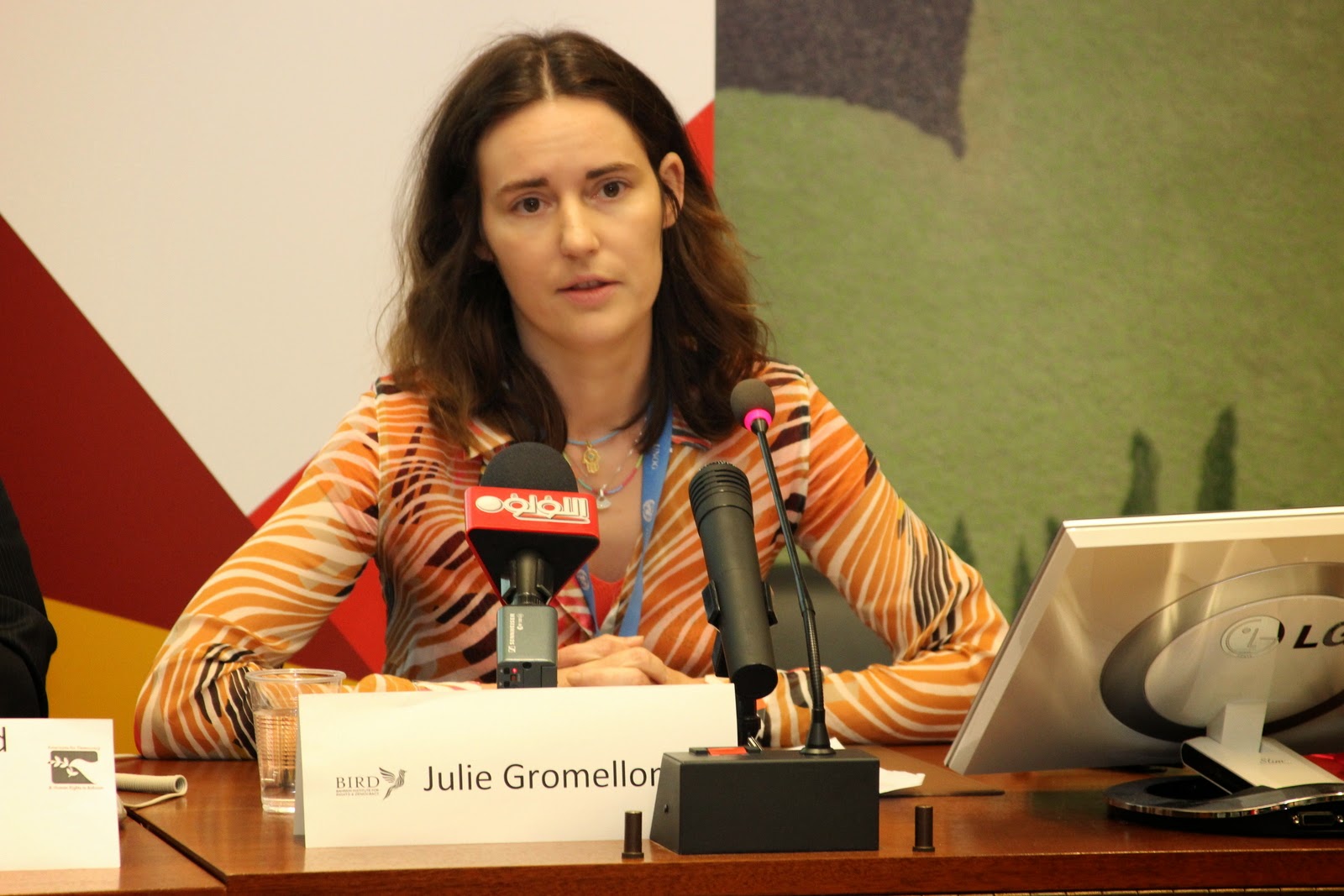 Ms. Julie Gromellon from FIDH spoke about what steps could be taken at the Human Rights Council. Human rights organizations, including FIDH, have been extremely active on the subject of Bahrain in recent years, but have been actively blocked from action by the government. Despite this, human rights organizations must continue to be active. She echoed Mr. Stork’s call for a Human Rights Council resolution on the human rights situation in Bahrain. 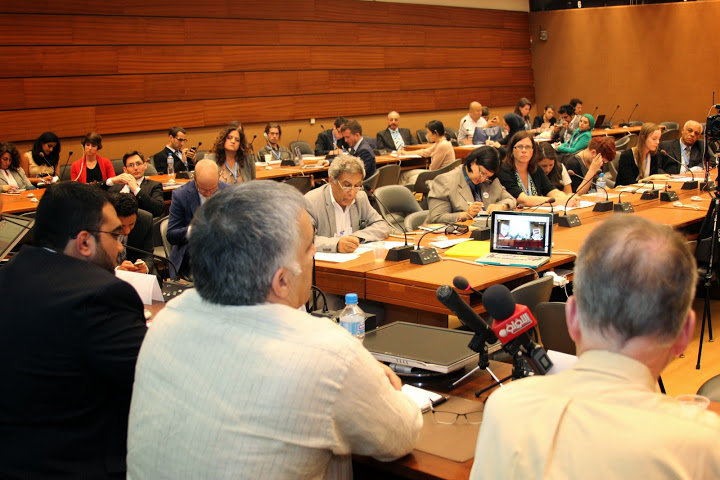 Mona Hejnes asked the panel what it thought about engaging Bahraini human rights institutions. Mr. Rajab answered; “We hope to work with these institutions in the future and then evaluate their work.” Rajab continued, “If those institutions worked well, we would support them.” He stated, however, that he doesn’t believe that they are yet functioning, and instead work to improve Bahrain’s image rather than its human rights situations. Mr. Abdulla stated that ADHRB has submitted over 20 complaints to the office of the Ombudsman, and has yet to receive a response on a single one.

Mary McGuire from Freedom House stated that Bahrain is an extremely “frustrating” country to work on. “We’ve talked about a resolution potentially happening in September. What can civil society do to support this?” Joe Stork responded, saying that organizations should quote government statements, such as the acceptance of the BICI and the various UPR recommendations, and ask in the resolution for Bahrain to report their implementation status in the following Session. Julie Gromellon stated that organizations need to place pressure on the United States to join the resolution, noting with regret that the United Kingdom had already signaled its disapproval.

Mr. Michael Payne from ADHRB asked Mr. Rajab what role he saw OHCHR playing in the future. Mr. Rajab responded with doubt that the government would allow OHCHR to establish a permanent mission. “The Bahraini government is smart to mislead the public,” Rajab said, noting that the government only invites United Nations delegations to the country to forestall official UN action. 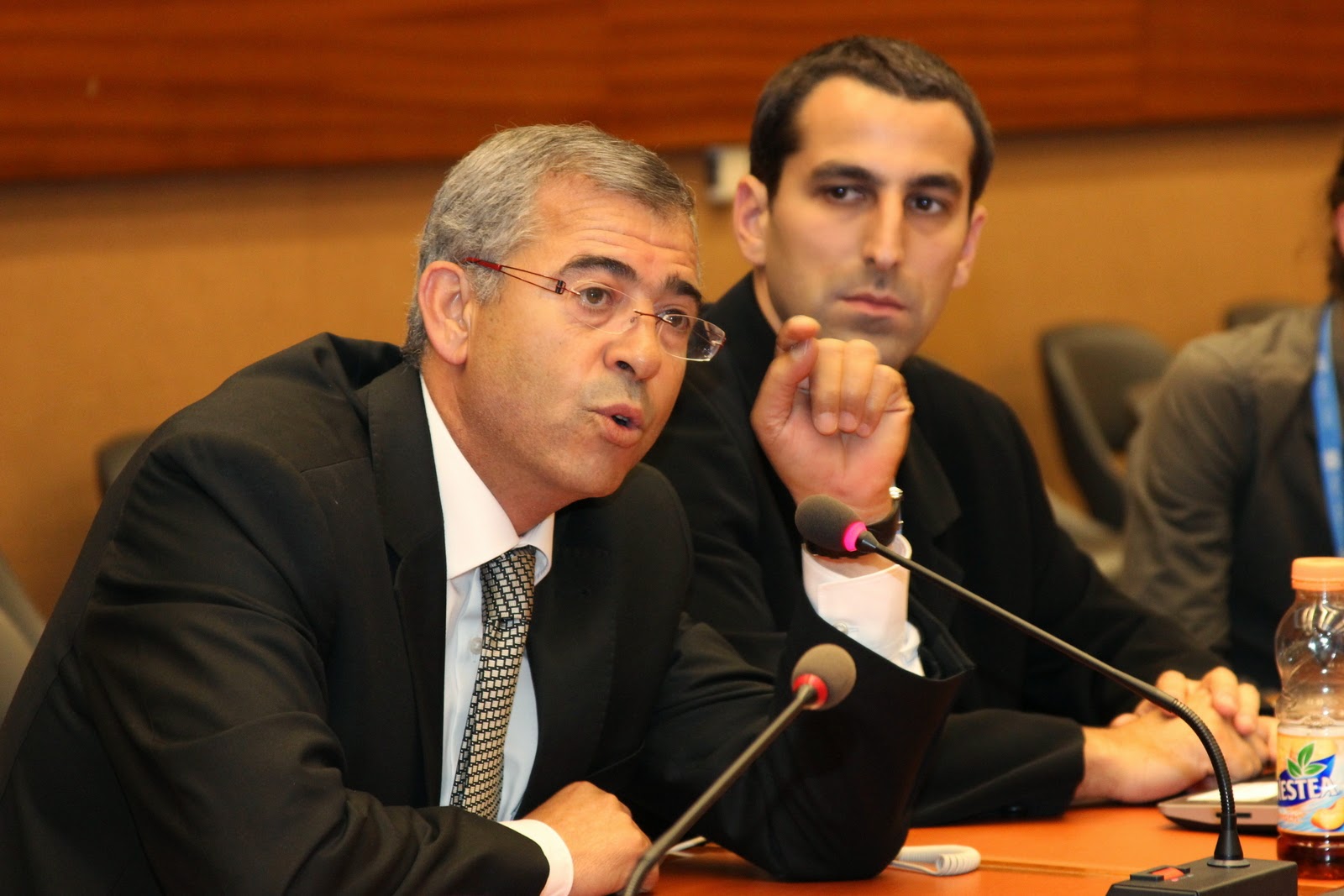 Frej Feneche from OHCHR expressed his office’s excitement for the release of Nabeel Rajab. He continued by stating that he hoped to see the same treatment given to all political prisoners. He clarified the issue of the field office and the permanent office. “It should be very clear that any decision regarding our engagement is at the discretion of the High Commissioner.” He stated that his office’s mandate was to push for the respect of international obligations. “We are cooperating and have good relations with the Government of Bahrain regarding the improvements of the human rights situation,” he said. However, nothing can prevent the High Commissioner from taking action on any violation in any country. “Even if we have a team on the ground,” he said, OHCHR will still be active on human rights violations in Bahrain. “We will never give up on the defense and support of all human rights defenders everywhere and all of the protections and situations in Bahrain.”