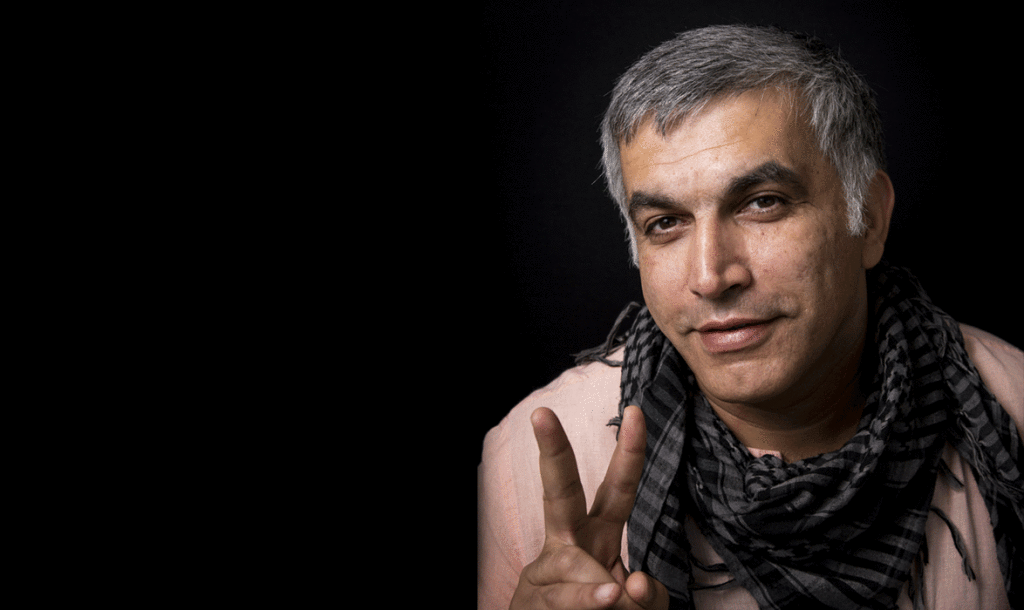 The undersigned more than 100 organisations call for the immediate, unconditional release of detained human rights defender Nabeel Rajab, arrested on 1 October 2014 in Bahrain.

One tweet, from 28 September 2014, said: “many #Bahrain men who joined #terrorism & #ISIS have come from the security institutions and those institutions were the first ideological incubator.”

Rajab was detained until the following day when the public prosecution ordered his detention be extended for seven days pending investigation. On 9 October, no hearing took place and his case was instead transferred to the Lower Criminal Court for a hearing on 19 October, thus extending his detention a further ten days. It should be noted that he is no longer under pre-trial detention as he has now been charged. In addition, a new complaint was filed by the Bahraini Defense Forces in relation to the same tweet about ISIS. The BDF claims it was insulting to both security and military institutions of Bahrain.

It’s feared that the government of Bahrain may try to imprison Rajab for a long time. Under Article 216 of the Bahraini Penal Code, this crime is punishable with up to three years in prison. Article 216 provides that: “A person shall be liable for imprisonment or payment of a fine if he offends by any method of expression the National Assembly, or other constitutional institutions, the army, law courts, authorities or government agencies.”

Rajab was imprisoned several times in the past few years. On 9 July 2012, the 5th Lower Criminal Court sentenced him to three months in prison, in a case that is linked to six tweets he posted on 2 June 2012. He had served almost the full sentence before that conviction was overturned on 23 August 2012. However, on 16 August 2012, the Lower Criminal Court also sentenced Rajab to three years’ imprisonment for “participation in illegal gatherings and calling for a march without prior notification.” That sentence was reduced on 11 December 2012 to two years, and he was released on 24 May 2014.

During his previous imprisonment, Rajab has been subject to discrimination and ill-treatment in prison, including being placed in solitary confinement with a dead animal, being isolated from other political detainees for his entire detention period and being prevented from contacting his family on occasion, including after he reported violations that he had witnessed in prison. He was not permitted to see his family on the Eid this past week.

The undersigned organisations consider the detention of Rajab since 1 October to be a clear act of discrimination. Last month, another citizen was accused of a crime under the same article of the law, “offending the army”; however while that person was released within 24 hours, Rajab was denied release, presumably due to his reputation as a well-known human rights defender with a lot of influence on twitter, both locally and internationally.

We believe strongly that Nabeel Rajab has been targeted solely due to his peaceful and legitimate human rights work and in particular his recent successful missions to the UN Human Rights Council in Geneva and the European Union in Brussels. He is being detained for merely exercising his rights of freedom of expression and freedom of assembly, as guaranteed under the Universal Declaration of Human Rights.

The undersigned over 100 organisations call for:

We further urge the UN, US administration, the UK government, as well as other governments that have influence in Bahrain, the EU and leading human rights organizations to put real pressure on the government of Bahrain in order to immediately stop the judicial harassment of human rights defenders; drop all charges against them and release all detained human rights defenders and political prisoners, including Nabeel Rajab, Abdulhadi Al-Khawaja, founder of BCHR and GCHR, and Naji Fateel of the Bahrain Youth Society for Human Rights.

And the family of Nabeel Rajab: