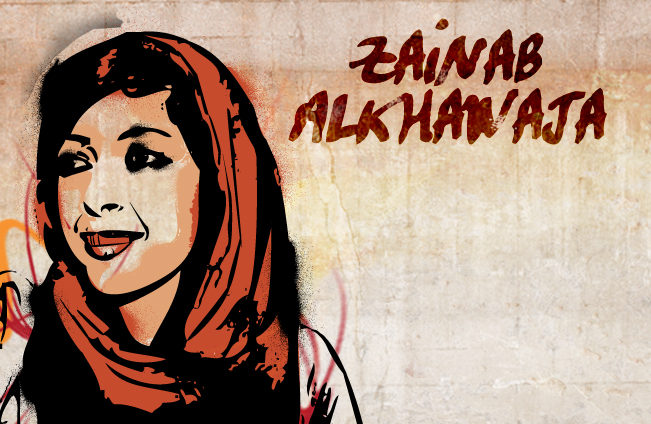 21 October 2014 – Urgent update:
Zainab’s case on charges of “publicly insulting the king” has been sped up and referred to Lower Criminal Court. The hearing session was yesterday on 21 October. Zainab has decided to boycott the hearing stating that the judiciary in Bahrain lacks independence and does not adhere to international standards of a fair trial. She has asked her lawyer not to attend either.

The judge adjourned the hearing for sentencing on 30 October 2014. She will remain detained until then.

Background on the case:
In a continuation of judicial harassment, three additional charges were recently brought against Zainab Al-Khawaja based on an attempted visit to her father at Jaw Prison in August. The charges are related to ‘entering a restricted area’, ‘not cooperating with police orders’ and ‘verbal assault’.

Zainab Al-Khawaja reported she attempted to visit her father, human rights defender Abdulhadi Al-Khawaja, in Jaw Prison on Thursday, 28 August 2014.  At the time, he was on a hunger strike, and his family was informed that he had collapsed on the floor in his prison cell. Zainab Al-Khawaja attempted to visit him in order to obtain an update on his health since medical professionals had also expressed concerns that he could suffer a heart attack at any moment.

Zainab Al-Khawaja was seven months pregnant at the time when she attempted to visit to her father. She reported that she entered through the main gate of the prison and walked to the building used for hosting visits, and saw no signs that indicated she was entering a restricted area; she was not stopped by the guards securing the perimeter of the prison grounds. Despite this, Zainab Al-Khawaja is being charged with having entered a restricted area. After reaching the visitor’s entrance, she was stopped by guards asking her reason for being there. She explained that she wanted to visit her father and make sure he was alive and well. She was informed by the guards that she had no right to do so, and the guards began filming her. They were joined by the Head of Prison, who was accompanied by a female police officer.  Orders were reportedly made to forcibly remove and arrest Zainab Al-Khawaja, and she immediately informed them that she was seven-months pregnant. There was a verbal exchange between the Head of Prison and Zainab Al-Khawaja, in which she was reportedly informed that the law was on the side of the officers, and that he took no responsibility for what may happen to her, or her unborn child.

Zainab Al-Khawaja was forcibly laid down on the ground, placed in hand cuffs and then transferred to Riffa police station where she was informed of the three new charges against her. She was later released the same day.

You can find out more about Zainab’s case on these links below :

The Bahrain Institute for Rights and Democracy (BIRD) calls for the immediate release of human rights defender and activist Zainab Al-Khawaja who was arrested and detained for “publicly insulting the [Bahrain’s] King” after tearing up a picture of him during a court hearing. The arrest of Mrs. Al-Khawaja comes after a series of arrests targeting prominent human rights defenders in Bahrain for peacefully expressing their opinions. She was already facing charges of destroying government property after tearing up a picture of the King in 2012. She also faces freedom of expression charges including insulting a policewoman, illegal gathering and inciting hatred against the regime.

The crime of “insulting the King” in Bahrain can carry a prison sentence of up to seven years alongside a 10000BD fine. It was formally implemented in the Bahrain Penal Code last year running contrary to international human rights law and standards.

BIRD is also concerned to note that Mrs. Al-Khawaja is 8 months pregnant making it highly likely that she could give birth in arbitrary detention.

After tearing the photo at Court she said: “I am the daughter of a proud and free man. My mother brought me into this world free, and I will give birth to a free baby boy even if it is inside our prisons. It is my right, and my responsibility as a free person, to protest against oppression and oppressors.”

Bahrain has come under intense criticism for targeting human rights defenders and activists for criticising the government. Authorities continue to hold Nabeel Rajab, the President of the Bahrain Center for Human Rights, after he posted tweets that were found to be “denigrating to government institutions”. Zainab’s sister, Maryam Al-Khawaja, was also arbitrarily detained upon her arrival in Bahrain last month after being assaulted at the airport. Her father, Abdulhadi Al-Khawaja, one of the most prominent human rights defenders in Bahrain, continues to serve a life sentence in prison despite a decision by the UN Working Group on Arbitrary Detention that his detention is arbitrary and that he must be released.

BIRD calls for the immediate release of Zainab Al-Khawaja, Nabeel Rajab, Abdulhadi Al-Khawaja and all other prisoners of conscience arbitrarily detained in Bahrain.