Apart in their Own Land: BIRD, ADHRB and BCHR release report on the discrimination of Shia 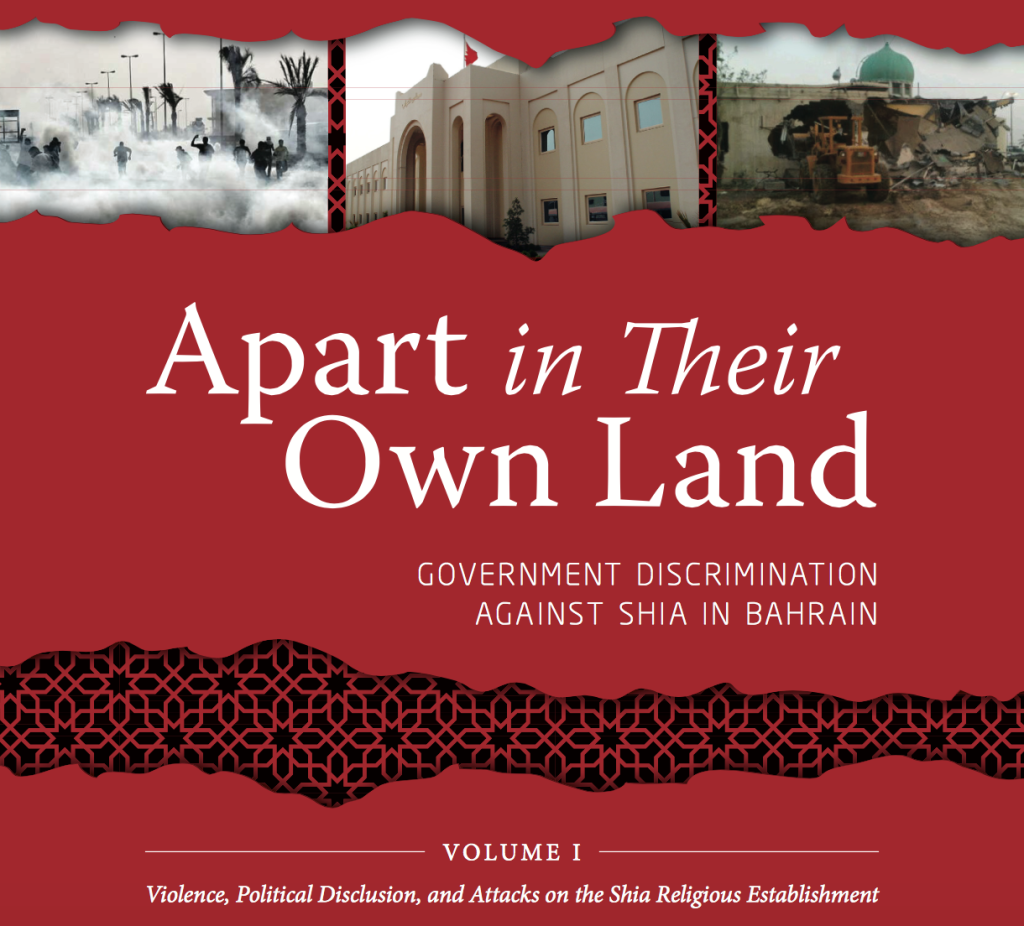 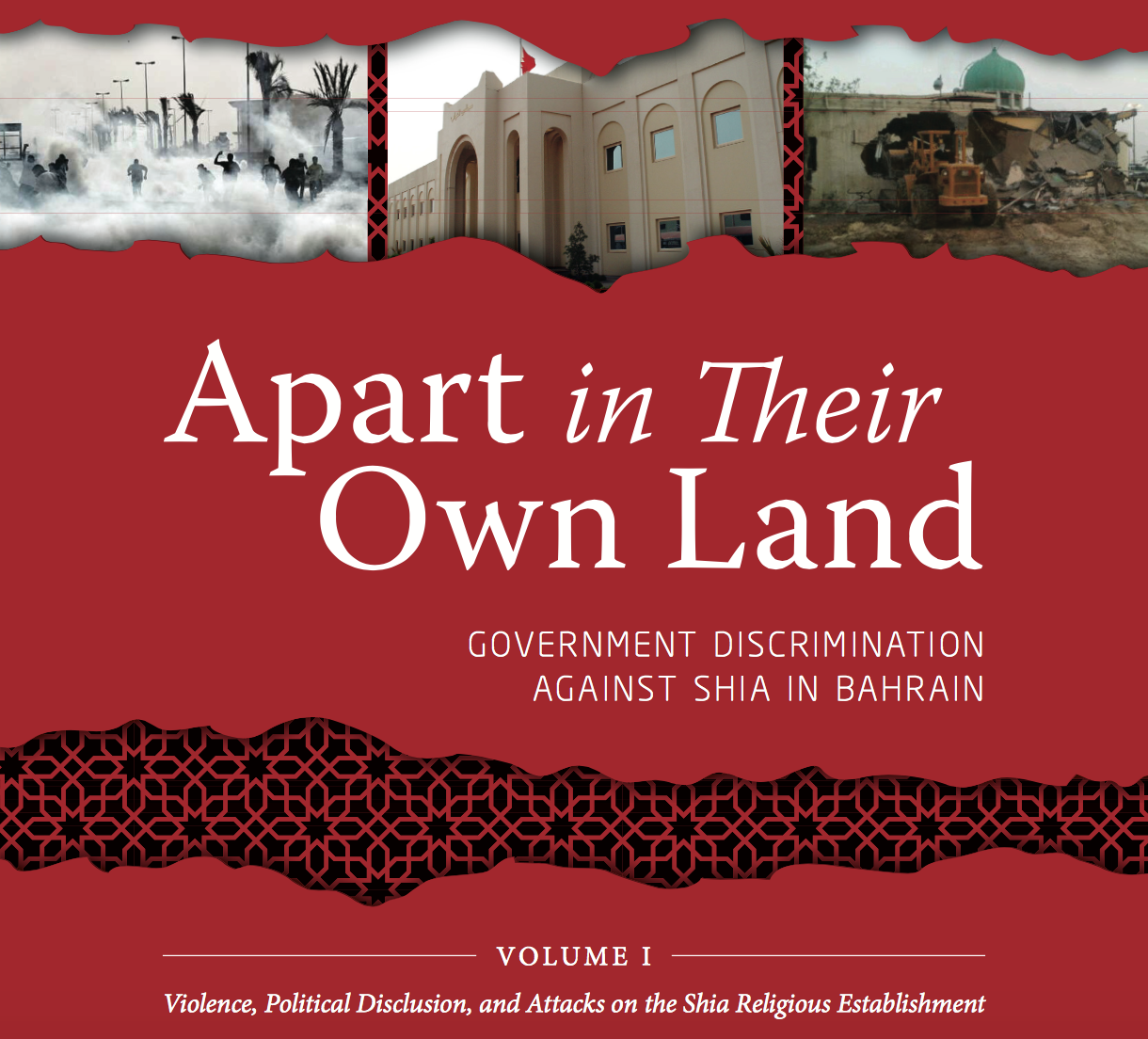 11 March 2015 – Americans for Democracy & Human Rights in Bahrain, the Bahrain Institute for Rights and Democracy, and the Bahrain Center for Human Rights are pleased to announce the publishing of a new report entitled, “Apart in Their Own Land: Government Discrimination against Shia in Bahrain.” The report is available for download here. The foreword of the report is available below.

In Bahrain, it’s not uncommon to hear talk of the government perpetuating a “Shia genocide” against its people. Such statements are either political hyperbole or grossly misinformed; although the government has committed extrajudicial killings – largely against Shia – in the past, government violence has never approached that which occurred in Rwanda or Srebrenica. Yet the fact that the Shia population in Bahrain speak in such terms denotes that the most substantial swath of the Bahraini population feels like its own country considers it the enemy.

That feeling appears to be accurate. It’s been over 200 years since the majority population of Bahrain effectively ruled itself, and discriminatory policies against the Shia have largely been the hallmark of the al-Khalifa dynasty since it conquered the island nation in the late 1700s. In the 1990s, it appeared that the government might turn a new leaf when then-Emir Hamad announced a return to a constitutional monarchy. The ten years that followed were perhaps the least violent in recent Bahraini history, as the government curtailed its use of arbitrary arrest and torture against the Shia opposition. As the political situation stymied over the next decade, however, tensions rose within a Shia population promised but never receiving a substantial voice in the government. These feelings culminated in the protest movement in February 2011, which, while not exclusively manned by Shia, significantly fed off of Shia resentment.

The al-Khalifa dynasty responded to the protests by going back to its old bag of tricks. While the early 2000s were marked by government restraint in at least its security policies towards the Shia, the period after 2011 has seen anything but, and allegations commonly arise that the government has arrested and detained political leaders, tear-gassed Shia villages, and tortured Shia youth. In 2011, the government went so far as to dismiss several thousand Shia from their jobs, and even bulldozed 38 Shia religious structures, including some 30 mosques. Shia remain almost wholly outside the decision-making and legislation-authoring sections of the government, and are barely represented in government emergency sector personnel, including the government security forces and military.

“Shia genocide” is a mischaracterization of the situation in Bahrain. Shia are not killed wholesale, and there are no concentration camps in the country. However, Shia are kept separate from the political structure, and often forced to live in small villages, are routinely targeted by security forces for arbitrary detention and torture, are fired for expressing their political views, are arbitrarily rendered stateless by Bahraini courts, and have seen their places of worship destroyed as part of a government-sponsored campaign of violence and intimidation. Were the Shia considered a race instead of a religious sect, their situation would almost exactly fit the definition of apartheid promulgated by the 1976 convention on the subject; while “Shia genocide” is political hyperbole, “Shia apartheid” is closer to the truth than the Bahraini government would want to admit.

The following report conclusively shows that the government has historically and is still carrying out a systematic policy of discrimination against the Shia of Bahrain. It presents itself in two volumes; this first volume focuses on state violence against Shia actors, the disclusion of Shia from the political process, and government discriminatory acts against the Shia religious establishment itself. By carrying out acts of violence against Shia protesters, keeping Shia removed from actual political power, and directly targeting the Shia religious establishment, the government has succeeded in not only subjugating over half of its population, but also in motivating fringe elements of Shia society into violence, thereby justifying a self-authored sectarian narrative. In order for Bahrain to reverse course and restabilize, the government will need to fully re-examine its policies regarding the Shia with the aim of better inclusiveness and respect for the human rights of all of its people.

Read the report in English

Read the report in Arabic