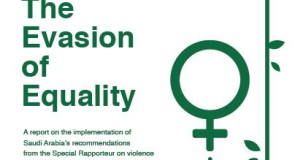 The Bahrain Institute for Rights and Democracy is pleased to announce the publishing of our new report entitled The Evasion of Equality: A Report on the Implementation of Saudi Arabia’s Recommendations from the Special Rapporteur on Violence against Women and Its Causes.

Critiquing the state of women’s rights or even human rights in general in Saudi Arabia can result in situations navigable only with extreme difficulty. The Saudi government is well-experienced in deflecting criticism without addressing it head-on, oftentimes stating that any such remarks constitute violations of the country’s sovereignty and unfair denigration of Sharia. In March 2015, the Foreign Minister of Sweden denounced the subjugation of women in Saudi Arabia. Over the course of the following two weeks, the Saudi government succeeded in changing the subject of the debate from the state of women’s rights and equality in its country to what it characterized as Swedish interference in its domestic affairs and debasement of Islamic Sharia law.

Saudi Arabia’s response in this scenario was not unprecedented. In November 2007, the government cited similar reasons when Western sources criticized a Saudi judicial ruling imposing 200 lashes on a rape victim. In March 2014, Saudi Arabia withdrew diplomatic representation from Qatar over sovereignty issues, and in 2003 the Saudi defense minister condemned international pressure to change Saudi education policy as “outside interference” in domestic Saudi affairs.

The international community seems largely content to allow Saudi Arabia to deflect. When Saudi Arabia employed the strategy against Sweden’s Foreign Minister, the Swedish king felt compelled to intervene in order to “recreate good relations” with the Middle Eastern kingdom. Upon closer examination of both the concept of sovereignty and the wider implementation of Sharia, however, the Saudi argument falls apart, in the process exposing itself as a ploy by which Saudi Arabia can continue abusing the rights of its citizens with little consequence from the international community.

Critiquing a state’s human rights record is never a violation of that state’s sovereignty. The concept of sovereignty in international law applies very strictly to actual coercion, without interfering with any state’s right to free expression. For criticism to amount to a sovereignty violation, it must carry force behind it, be it physical, economic, or otherwise. In this case, words are not bullets. Criticism of Saudi Arabia’s human rights record is not a violation of sovereignty.

Further, leveling criticism at the government of Saudi Arabia is not at all the same as criticizing Sharia. Many other Muslim governments throughout the world, both past and present, have managed to find ways to incorporate women’s equality into their own interpretations of Sharia. For all of its other human rights abuses, the Kingdom of Bahrain, Saudi Arabia’s Sharia-state neighbor just across the causeway, has never employed the guardianship system and allows women to drive cars. In Malaysia, another country that has adopted Sharia, women own property, run businesses, and participate fully in public life.

Sharia does not preclude gender equality even within Islamic scholarly circles, as academics and religious authorities around the world have repeatedly challenged the idea that Islam mandates feminine submission. With the depth of interpretation available for Sharia scholars and practitioners alike, Saudi Arabia’s claim that criticizing its stance on women’s equality is equivalent to criticism of Sharia, falls apart. And speaking personally as a practicing Muslim with two Muslim daughters, I find the Saudi use of Sharia to deflect criticism indefensible, a ploy to shield the Saudi government from compulsion towards change and empowerment.

As this report takes aim at Saudi practices regarding the subjugation of women within the country, it does so without violating the sovereignty of the Saudi Arabian State and without debasing the sanctity of Sharia. In order for Saudi Arabia to move into modernity, it must discontinue its practice of discarding constructive criticism and fully incorporate international human rights standards, including those pertaining to gender equality and women’s rights.