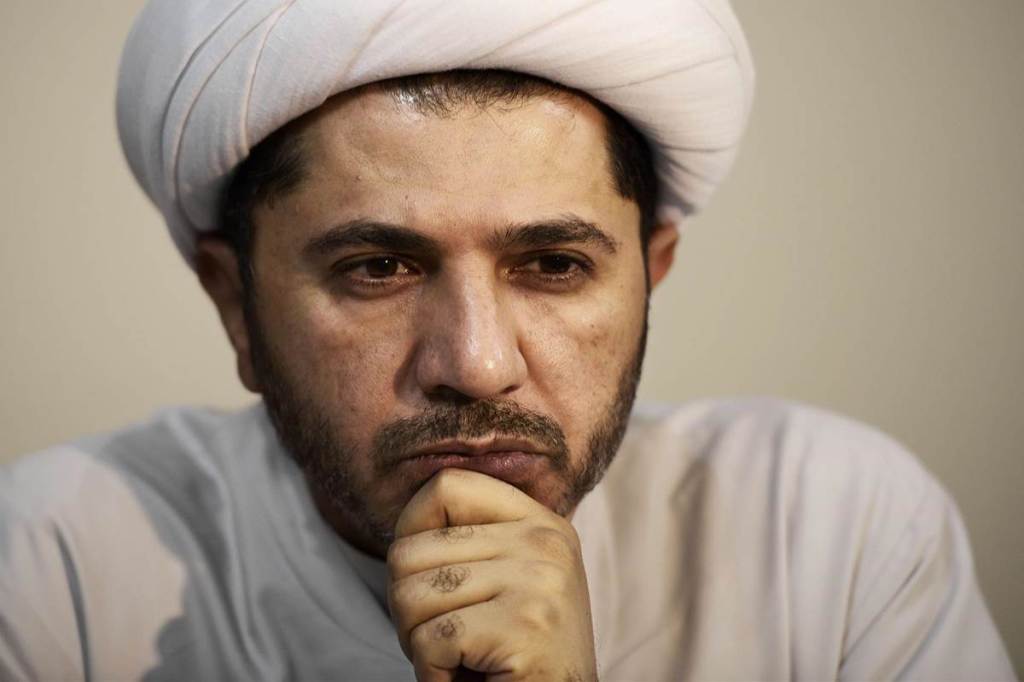 16 June 2015 – The Bahrain Institute for Rights and Democracy (BIRD), Americans for Democracy for Human Rights in Bahrain (ADHRB), and the Bahrain Center for Human Rights (BCHR) strongly condemn today’s sentencing of Sheikh Ali Salman to four years in prison on politically-motivated charges. The arrest, detention and sentencing of Sheikh Ali Salman is in contravention of international obligations and is a reprisal against his peaceful political activities as the leader of the largest opposition party in Bahrain. We are also concerned that this sentence is a step back in the struggle for democratization in the country and symbolizes a greater repression of dissent.

Sheikh Ali Salman was charged with publicly inciting hatred, an act which disturbed public peace, inciting civil disobedience of the law, insulting public institutions and promoting a change in the regime, in addition to a litany of other charges. The  Fourth High Criminal Court sentenced Sheikh Salman for a total of four years on the first three charges and found him not guilty of the latter. Sheikh Salman is to serve his sentence at Jau Prison. Following the sentence, Sheikh Salman’s lawyers confirmed that they will appeal the decision before a Higher Court.

At the time of his arrest in December 2014, the US Department of State also stated it was “deeply concerned” about Sheikh Salman’s arrest. At the 29th Session of the UN Human Rights Council this week, the US Mission to the United Nations reiterated this concern and encouraged Bahrain to follow international standards of due process in Sheikh Salman’s trial.

Husain Abdulla, Executive Director of ADHRB commented, “The conviction of Sheikh Ali Salman represents yet another major step backwards for democratic reform in Bahrain.” He added, “His sentence makes it clear that the ruling regime is not interested in engaging in dialogue with its citizenry and represents a strong signal to Washington and London that their indulgent approach to Bahrain will not garner reforms, but only further repression.”

Sheikh Ali Salman’s lawyers have maintained that the court did not follow due process and that the trial was unfair. The lawyers stated that the only evidence the defence was permitted to present were excerpts of Sheikh Salman’s speeches, which were taken out of context, and false testimonies. According Salman’s defense team, the judge exhibited a clear bias by deliberately interfering in the cross examination of the defense’s key witnesses, by objecting to their questions or rephrasing them. During the last trial session on 20 May 2015, the judge suspended the hearing after a few minutes without allowing the defense lawyers to submit further documents as evidence. Sheikh Salman’s lawyers submitted a complaint to the Head of the Supreme Council of the Judiciary requesting the installment of a new court panel that would respect their client’s right to a fair trial. However, no response has been received so far. The court has also repeatedly denied requests to release Sheikh Salman on bail.

“The sentence of Ali Salman once again confirms the lack of transparency and independence of Bahrain’s judiciary,” said Said Yousif, Vice-President of the BCHR. “Like Nabeel Rajab and the Bahrain 13 before him, Ali Salman has been punished for his free speech.”

The Bahraini government has been targeting Al-Wefaq Society members for their political views and human rights activism for years. Sayed Jameel Kadhem, head of Al-Wefaq’s Shura Council, was also taken to court in January over comments he posted on Twitter regarding corruption during the November 2014 elections. He was sentenced to six months in jail and remains imprisoned. In 2013, authorities arrested Khalil al-Marzooq, the Deputy Secretary-General of Al-Wefaq, and imposed a travel ban after he delivered a public speech criticizing the government. Two Al-Wefaq ex-MPs were stripped of their citizenship while some were arrested, detained, and tortured in 2011. Additionally, the government opened an official investigation into the political society in for “criminal tweets” in February 2015.

“Sheikh Ali stood for national reconciliation and peaceful advocacy, and his imprisonment is the clearest indication yet that Bahrain has turned its back on honest reform,” said Sayed Ahmed Alwadaei, Director of Advocacy at BIRD. “Bahrain’s international allies must reject this categorically.”

We, the undersigned human rights organizations, call on the Government of Bahrain to: