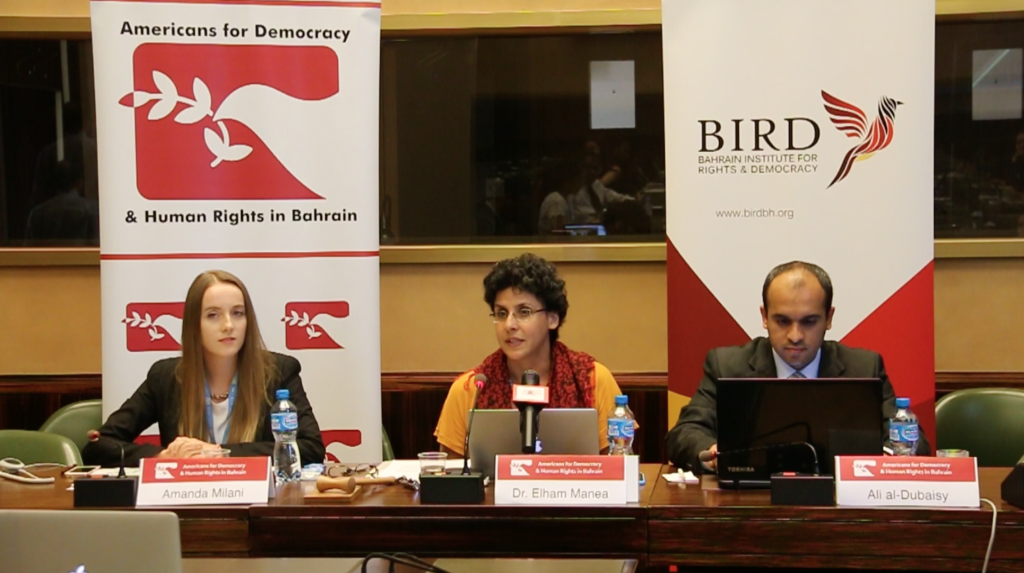 Americans for Democracy & Human Rights in Bahrain (ADHRB), the Bahrain Institute for Rights and Democracy (BIRD), Amnesty International, Human Rights Watch, and the European Saudi Organisation for Human Rights (ESOHR) co-sponsored an event entitled “Women’s Rights in Saudi Arabia,” at the 29th session of the UN Human Rights Council. Dr. Elham Manea, Associate Professor on the Middle East at the University of Zurich, moderated the panel, which included Amanda Milani, the UN Liason at ADHRB; Ali al-Dubaisy, Head of the ESOHR; and Hala al-Dosary, a Saudi writer and activist.

Dr. Elham Manea opened the event by discussing the Saudi legal system’s deficiencies. She argued that the system treats women as perpetual minors, infringing on their most basic human rights. She noted the disadvantages of the male guardianship system in Saudi Arabia in which every woman, regardless of economic or social status, must have a male guardian to carry out basic tasks, essentially depriving women from making the simplest decisions.

Amanda Milani began by introducing ADHRB’s new report on the discrimination against women in Saudi Arabia, entitled “The Evasion of Equality: A Report on the Implementation of Saudi Arabia’s Recommendations from the Special Rapporteur on Violence Against Women and its Causes.” Ms. Milani highlighted the fact that there are two systems of discrimination against women in Saudi Arabia, both under the law itself, and under the administration of justice. She argued that the law is derived from the Wahabbi interpretation of Sharia; much of the law is uncodified, giving judges broad and unaccountable discretionary powers. She added that this interpretation of Sharia reinforces the entrenched discrimination that women face in Saudi society. Furthermore, the administration of justice also severely limits women’s rights in the country. For example, despite the criminalization of domestic abuse, the law is ambiguous and its statutes are not coupled with clear enforcement mechanisms.

Ms. Milani went on to discuss other finding in the report, including domestic rape, the lack of judicial safeguards for women, violence against women, and the unique issues female migrant workers face in the country. She concluded her remarks by urging Saudi Arabia to take urgent and effective action to implement the recommendations made by the Special Rapporteur and withdraw all reservations to the Convention on the Elimination of All Forms of Discrimination against Women (CEDAW). She concluded that the Council must hold Saudi Arabia to a higher standard in order to see a real change in women’s rights in the region.

Ali al-Dubaisy argued that the Saudi government uses religion as an excuse to limit women’s rights. He highlighted the bans on women’s participation in political affairs and on women driving, both of which are not prohibited by religion. He mentioned that the Saudi government also invokes religion to neglect its obligations to international law. The Saudi government paired its ratification of CEDAW in 2000 with a vague and sweeping reservation, stating that the country would not apply treaty regulations that are “inconsistent with Sharia Law”, meaning the official ideology inside Saudi Arabia.

Mr. al-Dubaisy went on to describe Article 8 of CEDAW – the right for women to take part and participate in the work of international organizations – and argued that while Sharia law does not prevent women from working in such organizations, Saudi law prevents women from doing so. The government, for example, banned Samar Badawi from travelling as a reprisal for her participation in the 27th session of the UN Human Rights Council.

Samar’s ban is also representative of a larger government message to human rights defenders in Saudi Arabia: their participation in events at the international level is prohibited. Mr. al-Dubaisy concluded by stressing this government policy is not based in Islamic law. Rather, it is a decision rooted in political expediency.

Hala al-Dosari gave her valuable contribution on the status of women in Saudi law via Skype. She stated that, despite the fact that Saudi law sets out provisions to be applied without discrimination on the grounds of gender, religious edicts breach this prohibition on a daily basis. At the political level, although the government has recently granted women seats in the Shura Council, they remain a minority, contradicting the recommendations of the Special Rapporteur.

She went on to note that women in Saudi Arabia are frequently barred from occupying management positions, they are not able to pass on their nationality to their children due to Saudi nationality laws, and they cannot join scholarship programs if they do not have the permission of their male guardians. Women are required to have the permission of their male guardians to gain employment, seek medical attention, and attend universities. She also highlighted the fact that the guardianship system contributes to domestic violence by revoking the autonomy of women from making their own decisions or seeking help; the system remains a key impediment to women gaining equal rights in Saudi Arabian society.