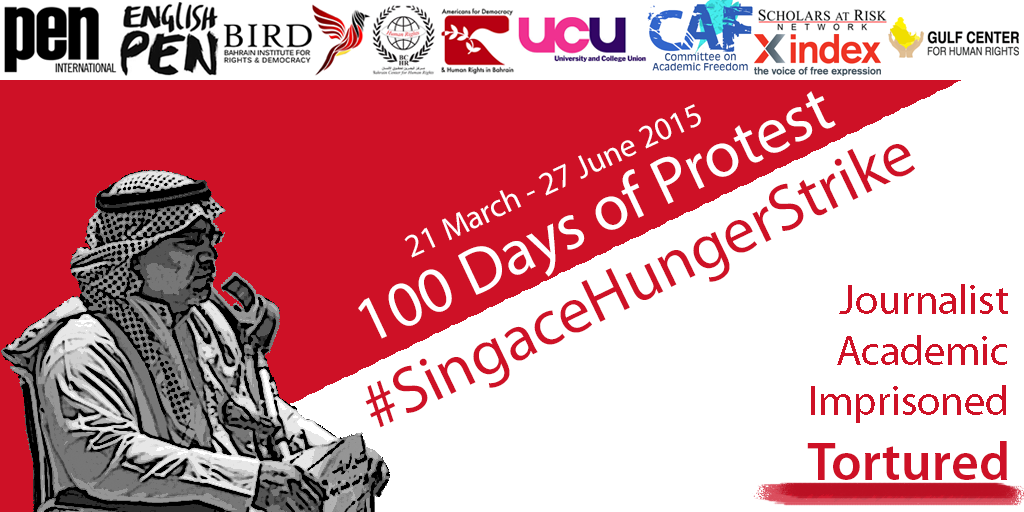 On 21 March 2015, Dr. Al-Singace began a hunger strike in protest of the ill-treatment of inmates and the poor, unsanitary conditions at Jau Prison.

Dr. Al-Singace suffers from post-polio syndrome, heart, eye, and sinus problems, and requires urgent nasal and ear surgery. Prison authorities have denied Dr. Al-Singace specialist medical treatment. He is detained in solitary confinement at Al-Qalaa Hospital and is not permitted to go outdoors. He is denied access to novels, television, radio, and even pen and paper. He is also not allowed access to religious books and prayer beads, and was not permitted a condolence visit when his nephew died.

We, the aforementioned NGOs, call for the immediate and unconditional release of Dr. Abduljalil Al-Singace in addition to all human rights defenders and activists in Bahrain who are detained in violation of Article 19 of the International Covenant on Civil and Political Rights, to which Bahrain is a state party. We demand that Dr. Al-Singace receives full access to specialized medical attention as a matter of urgency. We remind Bahrain of its obligations to comply with the UN Standard Minimum Rules for the Treatment of Prisoners. We also call on Bahrain to fully investigate the allegations of ill treatment and torture at Jau Prison, in line with its obligations under the Convention against Torture.

2. Scholars at Risk call for Action

We also invite you to join our social media campaign and to tweet using the hashtag #SingaceHungerStrike.