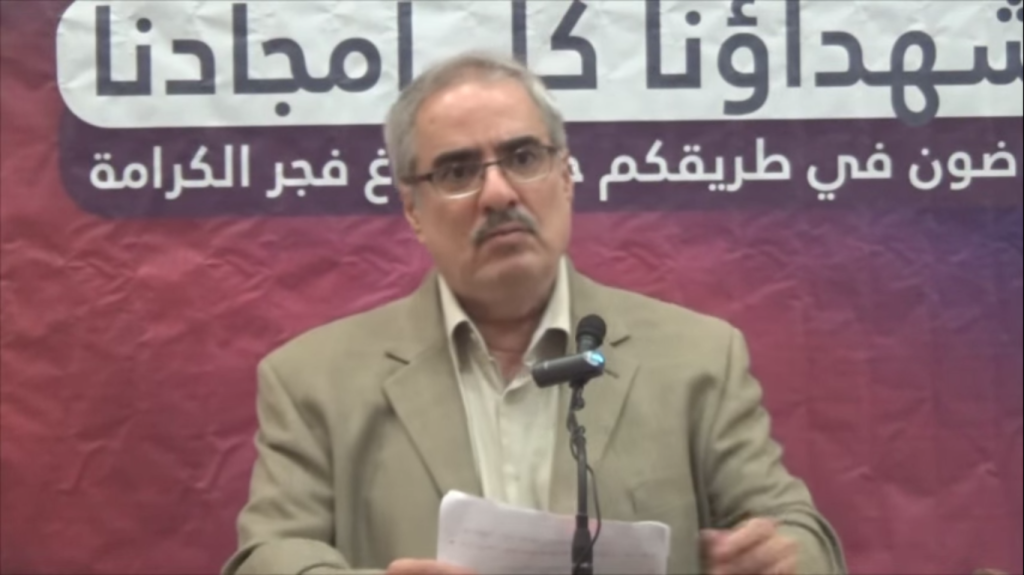 UPDATE: 17 August 2015 – Ebrahim Sharif is expected to be presented before a Bahraini criminal court on 24 August 2015.

Though not named, the description of the individual in the first tweet clearly identifies Ebrahim Sharif.

13 July 2015 – London, UK – On Sunday 12 July, Bahrain’s police arrested Ebrahim Sharif, the former General Secretary of the National Democratic Action Society (Wa’ad). Sharif is one of the “Bahrain 13”, a group of prominent human rights defenders and opposition figures in Bahrain. He was recently released from detention on 19 June after serving over four years in prison on charges related to his freedom of expression.

His arrest comes only weeks after Bahrain sentenced the leader of the Wefaq Political Society, Sheikh Ali Salman, to four years imprisonment, also on charges related to freedom of expression.

At approximately 2.30 am on Sunday, an estimated six police jeeps and eight civilian cars carrying at least 30 officers raided Mr. Sharif’s home. He was arrested before dawn and escorted to a Police Station in Muharraq, where he will be detained for at least 48 hours pending investigation.

Sharif’s arrest follows a speech he delivered on 10 July, which, according to the Director General of the Criminal Investigation and Forensic Science, under the Ministry of Interior, “encouraged the overthrow of the government and incited hatred.” The Director General further alleged that the speech “incited violence, hatred and sectarianism.”

On reviewing the speech, the Bahrain Institute for Rights and Democracy (BIRD) did not find any language of incitement to violence, hatred or sectarianism, as alleged by the Ministry of Interior. In fact, Mr. Sharif instead condemned violence and encouraged peaceful actions to deter it.

The Ministry of Interior confirmed the arrest via Twitter, announcing that Sharif had been arrested for “intentionally violating the law.”

Sharif’s re-arrest comes two weeks after the United States announced the end of its four-year-long arms ban on Bahrain, citing “the recent release of a number of prisoners charged with crimes related to their political association and expression” as a sign of “meaningful progress and reconciliation.”

“There is no meaningful progress in Bahrain, and no efforts for reconciliation or dialogue,”

“The arrest of Ebrahim Sharif shows that the United States was categorically wrong to lift its arms suspension and must immediately reassess its decision.”

Just two days prior to Sharif’s arrest, the European Parliament passed resolution of 9 July 2015 on Bahrain, in particular the case of Nabeel Rajab (2015/2758), condemning the deterioration of the country’s human rights record. The resolution had welcomed the early release of Ebrahim Sharif but called on the government to “drop all charges” against all political prisoners. It further called for an EU-wide ban on the export of tear gas and crowd control equipment to Bahrain.

An Early Day Motion at the UK Parliament has also so far attracted at least 29 Members of Parliament to condemn restrictions on free speech in Bahrain since publication on 2 July.

“The EU should put its full weight behind protecting free speech in Bahrain following its complete criminalisation by the government,”

said Sayed Ahmed Alwadaei, Director of Advocacy at the Bahrain Institute for Rights and Democracy,

“The EU must push Bahrain to comply with its human rights obligations by finally actioning and implementing the resolution.”

Mr. Sharif’s arrest and detention is in contradiction to the universal right to peaceful freedom of expression and the right to hold opinions guaranteed by Article 19 of International Covenant on Civil and Political Rights and Article 19 of the Universal Declaration of Human Rights, both to which Bahrain is a party.

The Bahrain Institute for Rights & Democracy and Americans for Democracy & Human Rights in Bahrain condemn the arrest of Mr. Sharif and call on the Government of Bahrain to:

On the United Kingdom to :