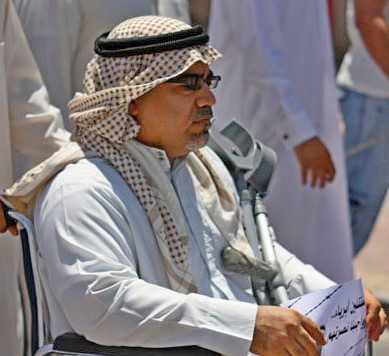 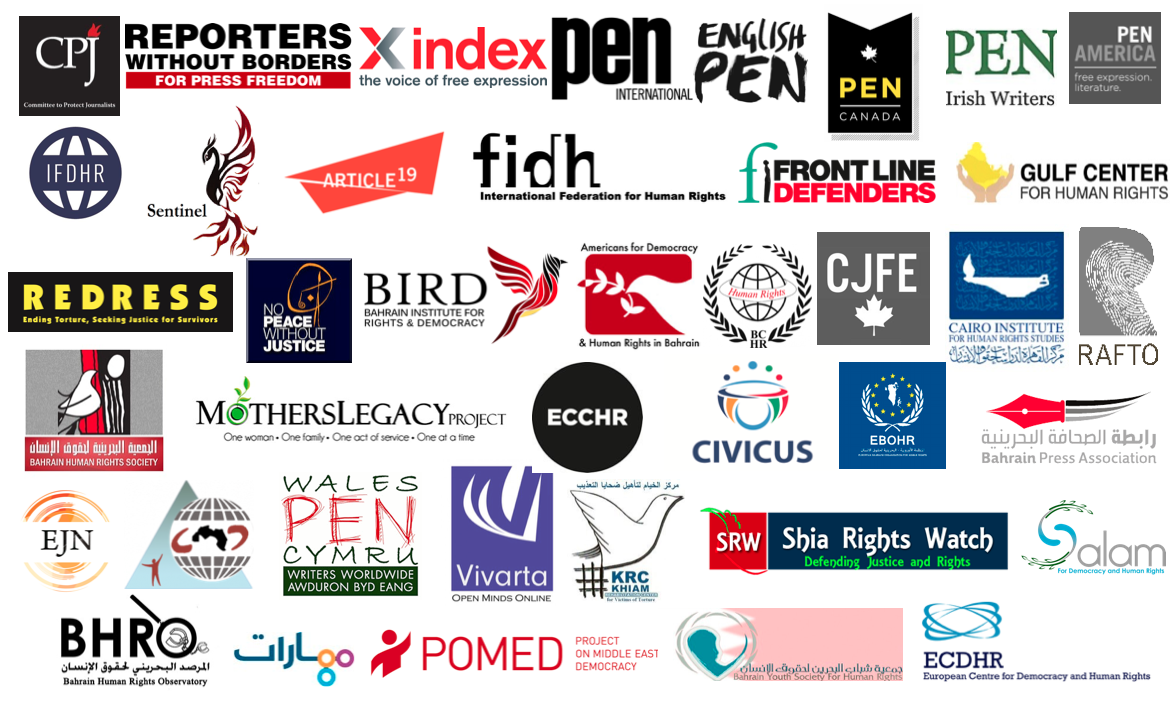 On 21 March 2015, Dr al-Singace went on hunger strike in protest at the collective punishment and acts of torture that police inflicted upon prisoners following a riot in Jau Prison earlier that month. Since then, he has subsisted on water, fizzy drinks and IV injections.

The United States government recently stated their awareness of Dr al-Singace’s case and urged Bahrain to ensure adequate medical care for all prisoners and an investigation into all reports of mistreatment. The UK government has previously raised his case with Bahrain, though they have never called for his release. The 41 NGOs call on the international community, and in particular the US and the European Union, to urge for Dr al-Singace’s release.

The release of the urgent appeal also coincides with a protest led by the Bahrain Institute for Rights and Democacy (BIRD), English PEN, Index on Censorship and REDRESS outside the UK Foreign and Commonwealth Office, London, calling on them to take action on Dr al-Singace’s case and to put pressure on the Bahraini authorities to end human rights abuses in Bahrain and its prisons.

Sayed Ahmed Alwadaei, Director of Advocacy at BIRD: “The United Kingdom should use its leverage with Bahrain to secure Abduljalil’s release and hold their ally accountable. He is a blogger, a journalist, a thinker and categorically should not be in prison.”

Cat Lucas, Writers at Risk Programme Manager, English PEN: “PEN remains seriously concerned for Dr al-Singace, now on the 160th day of his hunger strike in protest at the treatment of his fellow prisoners. We continue to urge the Bahraini authorities to release Dr al-Singace and the many other writers of concern to PEN unconditionally, and to allow him access to the medical attention he requires, as well as to reading and writing materials, as a matter of urgency.”

Jodie Ginsberg, CEO, Index on Censorship: “Dr al-Singace has been on hunger strike for more than five months and the UK has yet to call for his release. His arrest, sentencing and treatment in jail have received international condemnation and we call on Britain to join global counterparts in calling for Dr al-Singace’s release and ensuring he receives appropriate medical assistance.”

On 21 March 2015, Dr al-Singace went on hunger strike in protest at the collective punishment and acts of torture that police inflicted upon prisoners following a riot in Jau Prison earlier that month. Today, he passed 160 days of hunger strike.

Dr al-Singace suffers from post-polio syndrome and is disabled. In addition to the torture Dr al-Singace has suffered, his medical conditions have deteriorated considerably as a result of his incarceration. Prison and prison hospital authorities have denied him physiotherapy and surgery to his nose and ears. He is currently being held in solitary confinement in a windowless room in Al-Qalaa hospital.

We remind the Bahraini government of its obligations under the International Covenant on Civil and Political Rights (ICCPR), which Bahrain acceded to in 2006. Under the ICCPR Bahrain must ensure that no individual is subjected to arbitrary detention (Article 9) and that everyone enjoys the right to freedom of expression (Article 19). We demand that the government release all individuals who are arbitrarily detained for exercising their right to free expression, whether through peaceful assembly, online blogging or other means. We also remind the Bahraini government of its obligations arising from the 1984 Convention against Torture and Other Cruel, Inhuman, or Degrading Treatment or Punishment (CAT), to which Bahrain is a state party. In 2015, the UN Working Group on Arbitrary Detention found that arbitrary detention and torture are used systematically in the criminal justice system of Bahrain.

We, the undersigned NGOs, call on the Bahraini authorities to release Dr Abduljalil al-Singace and all prisoners of conscience in Bahrain.

We further call on the international community, and in particular EU member states and the United States, to demand release of Dr al-Singace.

Dr al-Singace has been the target of judicial harassment since 2009, when he was arrested for the first time and charged with participating in a terror plot and inciting hatred on his blog, Al-Faseela, which was subsequently banned by Bahraini Internet Service Providers. Dr al-Singace had blogged prolifically and critically against governmental corruption in Bahrain. He was later pardoned by the King and released, although his blog remained banned in Bahrain.

In August 2010, police arrested Dr al-Singace on his return from London, where he had spoken at an event hosted by the House of Lords on Bahrain. A security official at the time claimed he had “abused the freedom of opinion and expression prevailing in the kingdom.” Following his arrest, Bahraini security forces subjected Dr al-Singace to acts of physical torture.

Dr al-Singace received a second royal pardon alongside other political prisoners in February 2011. He was rearrested weeks later in March following the imposition of a state of emergency and the intervention of the Peninsula Shield Force, an army jointly composed of the six Gulf Cooperation Council countries.

On 22 June 2011, a military court sentenced Dr al-Singace to life imprisonment. He is one of thirteen leading human rights and political activists arrested in the same period, subjected to torture, and sentenced in the same case, collectively known as the “Bahrain 13”. A civilian appeals court upheld the sentence on 22 May 2012. The “Bahrain 13” are serving their prison sentences in the Central Jau Prison. Among the “Bahrain 13”, Ebrahim Sharif, former leader of the secular political society Wa’ad, was released by royal pardon on 19 June 2015, but was rearrested weeks later on 11 July, following a speech in which he criticized the government. He currently faces charges of inciting hatred against the regime. On 9 July 2015, the EU Parliament passed an Urgent Resolution calling for the immediate and unconditional release of the “Bahrain 13” and other prisoners of conscience in Bahrain.

During his time in prison, authorities have consistently denied Dr al-Singace the regular medical treatment he requires for his post-polio syndrome, and have failed to provide him with the surgery he requires as a result of the physical torture to which he was subjected in 2011. Dr al-Singace has an infected ear, suffers from vertigo, and has difficulty breathing.

A combination of poor quality prison facilities, overcrowding, systematic torture and ill-treatment led to a riot in Jau Prison on 10 March 2015. Though a minority of prisoners participated in the riot, police collectively punished prisoners, subjecting many of them to torture. Authorities starved prisoners, arbitrarily beat them, and forced them to sleep in courtyards for days, until large tents were erected. Fifty-seven prisoners are currently on trial for allegedly instigating the riot.

In response to these violations, Dr al-Singace began a hunger strike on 21 March. It has now been 160 days since Dr al-Singace has eaten solid foods, and he has lost over 20 kilograms in weight. Dr al-Singace subsists on water, drinking over four litres daily, fizzy drinks for sugar, nutritional supplements, saline injections and yoghurt drink. His intake is monitored by hospital nurses.

Since the start of Dr al-Singace’s hunger strike, he has been transferred to Al-Qalaa Hospital for prisoners, where he has been kept in solitary confinement in a windowless room and has irregular contact with medical staff and family. Prison authorities prevented condolence visits to attend his nephew’s and mother-in-law’s funerals. Dr al-Singace should be immediately released, allowed to continue his work and given full access to appropriate medical treatment without condition.