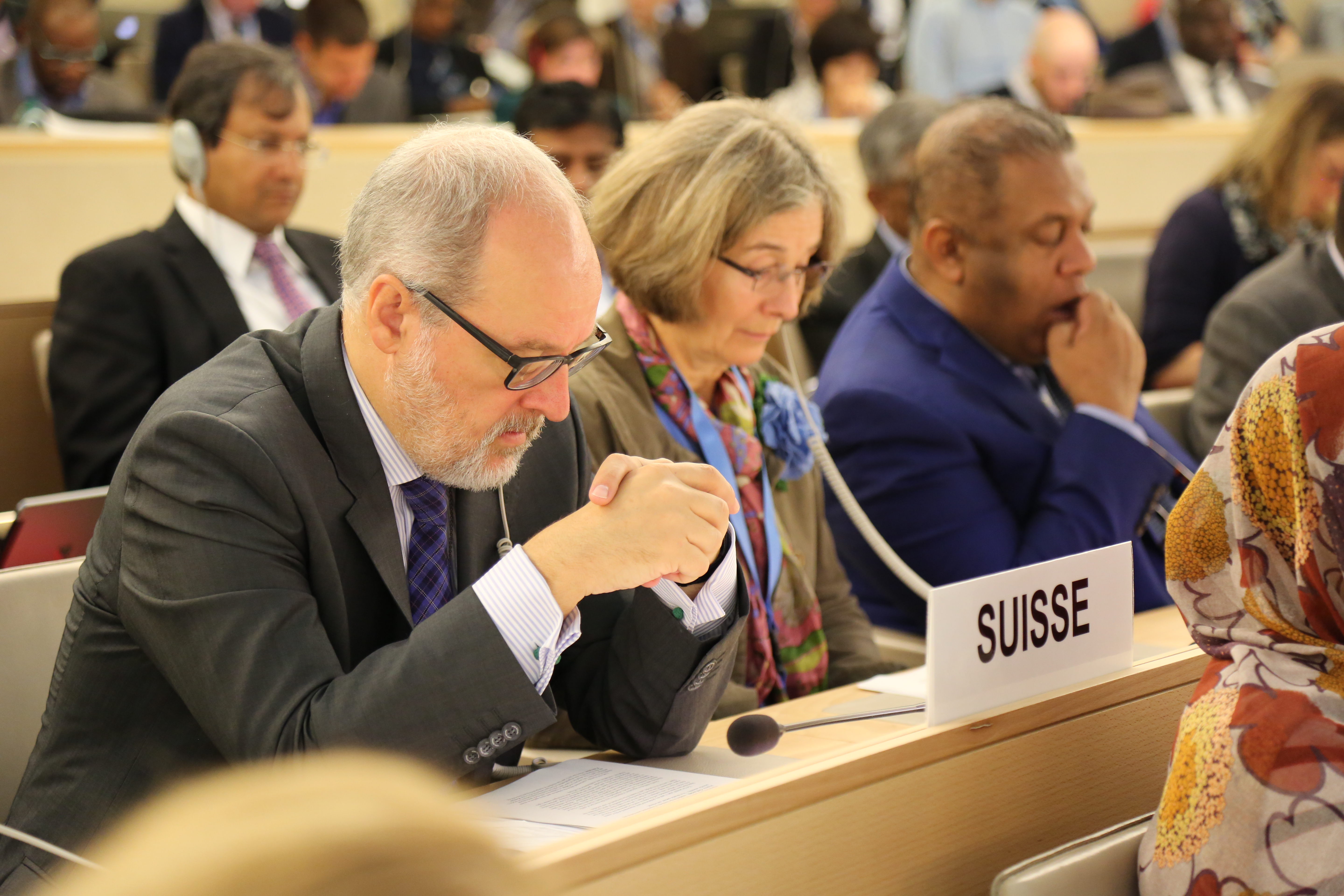 14 September 2015 – Geneva, Switzerland – Americans for Democracy & Human Rights in Bahrain (ADHRB), the Bahrain Center for Human Rights (BCHR), and the Bahrain Institute for Rights and Democracy (BIRD), welcome today’s joint statement raising the concern of 33 States about the human rights situation in Bahrain during the 30th Session of the Human Rights Council. This joint statement, led by Switzerland, raises the persistent concerns of the international community regarding a wide variety human rights abuses in Bahrain, including the ongoing use of torture, excessive & indiscriminate use of force, and restrictions on the freedoms of opinion, expression and assembly. This latest joint statement builds on four previous joint statements in the Human Rights Council since 2012, which raised similar concerns and enjoy a growing coalition of cross-regional support.

In addition to recognizing a long list of human rights abuses, the 33 States called on Bahrain to take action to substantively address these concerns. The States called on the government to fully implement the recommendations of the Bahrain Independent Commission of Inquiry (BICI) and Bahrain’s Second Cycle Universal Periodic Review, as well as for enhanced cooperation with the Office of the High Commissioner for Human Rights (OHCHR) and the UN Special Procedures. States also called for the release of all persons imprisoned for exercising their human rights, and for the government to “put an end to the repression of peaceful protestors and issue clear instructions to the security forces to refrain from using disproportionate force against the protestors.”

“Today’s statement is a clear message from the international community that Bahrain cannot continue to dodge accountability for its human rights abuses,” said Husain Abdulla, Executive Director of ADHRB. “The Government of Bahrain must address these concerns, or potentially face increased international consequences.”

Since 2012, five successive joint statements have been made on Bahrain at the Human Rights Council, with a growing number of States showing support for addressing these ongoing issues. Since 2013, all of the statements have enjoyed the full support of all European Union Member States, in addition to Switzerland, the United States, and a growing list of Latin American, African and Asian States.

“In Bahrain, we welcome the continued attention and concern of the international community on these longstanding human rights abuses, and hope that the Government will commit to cooperation, transparency, and reform,” said Nabeel Rajab, President of BCHR. The Director of Advocacy at BIRD, Sayed Ahmed Alwadaei, added that “the Government must act on these concerns now, or the Council may resolve that more serious measures are required in the immediate future.”

I have the honour to make this statement on behalf of a group of 33 States. The statement with the list of States will made available on the HRC Extranet.

We recognize and welcome the positive steps taken by the Government of Bahrain in order to im- prove the human rights situation. In particular, we are encouraged by the establishment of the Ministry of the Interior Ombudsman and its reports, the Special Investigation Unit and its efforts to investigate and prosecute alleged violations by security officials, the Prisoners ́ and Detainees ́ Rights Commis- sion, and the National Institute for Human Rights and its reporting. We support the Government of Bahrain continuing to work to make these institutions and the judiciary more impartial, transparent, independent and effective. We also welcome the Government’s interim report to the 2nd UPR cycle and its implementation of a number of recommendations including the separation of juvenile detain- ees from adults. We note with satisfaction that a technical visit of the OHCHR took place in the fall of 2014, that public consultations between all stakeholders, including civil society, were conducted dur- ing the visit, and that technical cooperation projects were discussed.

However, the human rights situation in Bahrain remains an issue of serious concern to us. We are concerned about reports of harassment and imprisonment of persons exercising their rights to free- dom of opinion and expression and of peaceful assembly and association, including human rights defenders about the lack of sufficient guarantees of fair trial; by the detention of minors due to their participation in demonstrations and urge the Government to look at alternatives to detention. We are concerned that there is insufficient accountability for these and other human rights violations. We are concerned by reports of excessive use of force by the riot police forces. We condemn the targeting of security forces personnel, including through the use of IEDs that have resulted in the death of police- men, four in the last year. Lastly, we are concerned about reports of torture and ill-treatment in deten- tion including reprisals against victims reporting human rights abuses or violations as well as against individuals cooperating with the UN.

We call upon the Government to expedite the full implementation of the recommendations of the BICI and the UPR, by undertaking further measures, in particular amending or repealing legal provisions that are not in line with Bahrain’s international human rights obligations and commitments, in particu- lar regarding freedom of expression.

We call upon the Government to agree to a visit to Bahrain by the Special Rapporteur on Torture. We are encouraged by the recent announcement by the Bahraini Foreign Minister regarding cooperation with the OHCHR and urge the Government to formalize this agreement as soon as possible. We also call upon Bahrain to further enhance its cooperation with the Human Rights Council, the Special pro- cedures and the treaty bodies.

We urge the Government to ensure the right to peaceful assembly and to continue to issue clear in- structions to the security forces to refrain from using excessive force against protesters, in accord- ance with international standards, and ensure their effective implementation.

We also urge the Government to release all persons imprisoned solely for exercising their human rights.

Finally, we invite the Government to revive the necessary conditions for the resumption of an open and inclusive national dialogue.