8 January 2016 — Bahraini and international NGOs strongly condemn the repeated use of the death penalty by Bahraini authorities and call for the government to commute the death and life sentences.

On 31 December 2015, Bahrain’s Fourth Criminal Court sentenced a man to death and 22 others to life imprisonment, bringing the total number of persons on death row in the country to ten. The government additionally revoked the nationalities of all the defendants, raising the number of denaturalizations in the country to over 200 in 2015 alone. On the same day, death row inmate Salman Isa’s first appeal was rejected.

The criminal court sentenced 12 of the 23 defendants in absentia, including Hussein Abdullah Khalil Ebrahim, 27, who was sentenced to death. The court found him and defendant Ahmed Isa Abdulhussein Hussein guilty of forming a terrorist organization, recruiting agents, engaging in rioting and planting explosives to disturb the peace and targeting police officers, and killing a police officer in 2014 with the aim of the violent overthrow of the regime. However, only Hussein Ebrahim was sentenced to death.

Eleven of the defendants, including two juveniles aged 16 and 17, were arrested in December 2014 in connection with the death of a police officer killed in an explosion in Demistan village on 8 December 2014. Police subjected most of the arrested defendants to enforced disappearance for over ten days and denied them access to their lawyers during interrogation. The defendants have reported that government agents tortured them during their disappearances.  The court found all 23 defendants guilty of terrorism and killing a police officer. Two defendants were additionally fined 200,000 Bahraini Dinars (USD $530,000).

Mohsen Ebrahim Hasan al-Majed is one of defendants who was subjected to severe torture following his overnight arrest on 14 December 2014. Following his arrest, the government transferred al-Majed to the Criminal Investigation Directorate (CID) for interrogation. While there, officers physically beat al-Majed, focusing on his head and genitals, and subjected him to electrocution. Al-Majed told his family that officers beat him with a wooden plank with nails. Officers insulted his faith and subjected him to sexual assault. After three days of sustained torture, al-Majed confessed to the charges. Despite this, he continued to receive beatings. Police then transferred al-Majed to the Public Prosecution, who threatened physical violence if he recanted. Al-Majed was sentenced to life and fined BD 200,000.

Bahrain has seen a rise in the use of the death penalty and denaturalization in 2015. Bahraini courts passed seven new death sentences last year. On the same day Hussein Ebrahim received the death sentence, the First High Appeals Court rejected the case of Salman Isa Ali, who in April 2015 the Fourth Criminal Court sentenced to death in a bombing case. 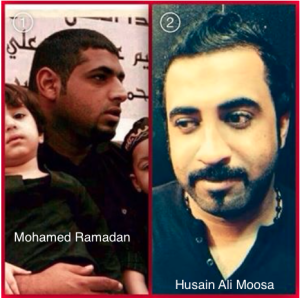 In November 2015, the Court of Cassation, Bahrain’s highest court of appeal, rejected the appeal of death row inmates Mohammad Ramadan and Husain Moosa. Ramadan and Moosa are the first people since 2010 to have exhausted all legal avenues of appeal, and stand at risk of imminent execution. Human rights activists on the ground fear that this risk has heightened following Saudi Arabia’s execution of Sheikh Nimr al-Nimr and 46 others inflamed tensions last week.

Meanwhile, an independent Bahrain Institute for Rights and Democracy (BIRD) investigation found that the government had stripped the citizenship of 208 persons in 2015 after amendments in the law empowered courts to denaturalise defendants found guilty of terrorism charges. The majority of such individuals were subjected to unfair trials, tortured, and left stateless.

We the undersigned organizations strongly condemn the use of the death penalty in Bahrain, especially in light of the unfair trials and use of torture which many death row inmates have been subjected to. In light of this, we call on the Government of Bahrain: