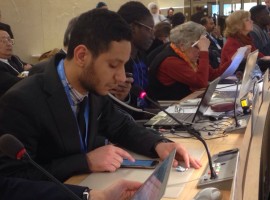 Sayed Ahmed Alwadaei addressed the High Commissioner for Human Rights and shared his assessment that “profound reforms are still required” in Bahrain. Furthermore, he asked “what tangible indications, have you received from the Government of Bahrain that the government intends to effectively cooperate with your office to implement legal and institutional reforms to uphold international standards of human rights?”

Sayed Ahmed Alwadaei also delivered an oral intervention to the UN Special Procedures, in which he raised concerns over Bahrain’s disregard for their work. He said: “The latest joint communications report contained six Bahraini complaints on behalf of ten mandates. Despite the breadth of complaints raised regarding both individual and systematic examples of human rights abuses, Bahrain continues to refuse visits to any members of the Special Procedures.” 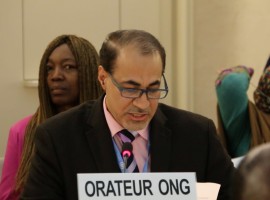 Mohammed al-Tajer delivered a 3 General Debate oral intervention on the  issue of torture in Bahrain. He declared that ADHRB, BIRD and BCHR “have documented nearly 500 discreet cases of human rights abuses in the country. In quantifying that data, we found that 370 victims alleged that they had been tortured by agents of the Government of Bahrain.”

Furthermore, he called on “the Council and the international community’s attention to the use of torture in Bahrain. We call on the Government of Bahrain to initiate immediate investigations and prosecutions of suspected torturers, and ask that the Government release all persons convicted on the basis of coerced confessions.” 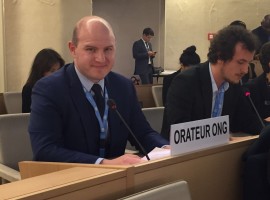 Michael Payne spoke on behalf of ADHRB, Alsalam Foundation, the Bahrain Institute for Rights and Democracy, and the Bahrain Center for Human Rights, and addressed the high number of arbitrarily detained political prisoners in Bahrain. He wished to “call on the Council’s attention to the high number of arbitrary detained political prisoners in the Kingdom of Bahrain. Amongst those detained and subjected to physical and psychological torture at Bahrain’s central Jau Prison are prominent opposition figures, professors, religious leaders, and doctors.”

Subsequently, he named six prominent individuals arbitrarily detained by Bahraini authorities and called “on Bahrain to release all arbitrarily detained political prisoners as a first and crucial step towards restoring Bahrain’s path to national dialogue and reconciliation.”