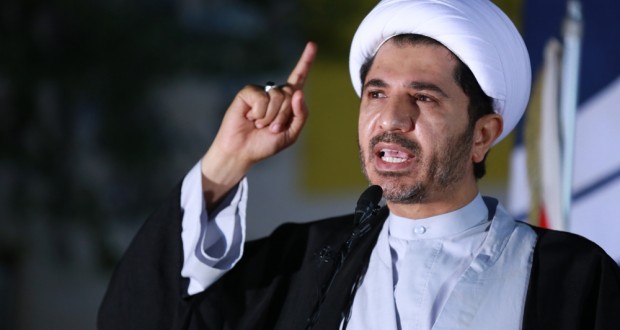 Manama – 30 May 2016, the Bahraini Court of Appeal toughened the sentence against Sheikh Ali Salman, Secretary-General of Al-Wefaq National Islamic Society, to nine years in prison, instead of originally a four years’ imprisonment sentence. The court convicted him of “attempting to overthrow the regime”, the same charge from which he was previously acquitted.

We, the undersigned NGOs, strongly condemn the Government of Bahrain’s increasing Sheikh Ali Salman’s sentence – over free expression related charges – in a trial that lacked due process. We express grave concern over the authorities’ continued prosecution and targeting of the country’s political opposition figures, which undermine efforts exerted by these figures to democratize Bahrain.

Sheikh Ali Salman is the Secretary-General of the largest legally permitted political society in Bahrain, Al-Wefaq. On 28 December 2014, Bahraini security forces arrested Sheikh Ali Salman, just two days after his re-election as the society’s Secretary General – when he delivered a speech calling for reforms in the country’s political system.

Six months later, on 16 June 2015, the Criminal Court sentenced Sheikh Ali Salman to four years in prison for “publicly inciting hatred, inciting civil disobedience of the law, and insulting public institutions” in his speeches and acquitted him of “attempting to overthrow the regime”. Although the main evidence on which the court based the conviction was Sheikh Ali Salman’s speeches, the judge refused the defense team’s request to present supporting evidence, including the recordings of the very speeches he was prosecuted over.

Today, nearly one year later, the Court of Appeal has not only upheld the four-year imprisonment sentence of Sheikh Ali Salman, but it has also further punished him for “attempting to overthrow the regime” – the charge which the criminal court had previously acquitted him of. Regardless of clear and persistent evidence, demonstrating Sheikh Ali Salman’s peacefulness in action and in speeches, the Government of Bahrain has chosen to escalate its action against him, and extend his sentence. He is now continuing to serve this sentence in Bahrain’s Central Prison at Jau.

The Bahraini Government’s actions are a clear indication of its total disregard for the potential implementation of real political reforms, and for engagement with other political societies and figures in any form of dialogue.  The authorities targeting of opposition political figures and their societies appears to be a part of its determined policy to further stifle the opposition, and maintain the status quo for its own agenda.

In September 2015, the United Nations Working Group on Arbitrary Detention (WGAD) declared that Sheikh Ali Salman had been arbitrarily detained by the Government of Bahrain. The decision, which cites both free expression and due process concerns, requests that the Bahraini government release Sheikh Salman immediately, and provide him with an enforceable right to compensation against the government.

Sheikh Ali Salman is one of three opposition political societies’ Secretary Generals currently in detention over charges in violation of their right to freedom of expression.  Fadhel Abbas, the Secretary General of the Democratic Unity Gathering Society (Al-Wahdawi), was sentenced to five years in prison for criticizing the killing of civilians in the war on Yemen. On 12 July 2015, Ebrahim Sherif, former Secretary-General of Wa’ad Society, was re-arrested shortly after his release following five years in prison. This second arrest was due to a speech he delivered at a public event, in which he mentioned the authorities were committing human rights violations, and called for political reform.

The government of Bahrain’s prosecution, sentencing, and detention of prominent Bahraini political figures is in direct violation of international human right conventions, to which Bahrain is a signatory. These include the right to freedom of expression and to freedom of association, as set forth in the International Covenant on Civil and Political Rights (ICCPR) in Article 19 and Article 22.

We call on the government of Bahrain to: