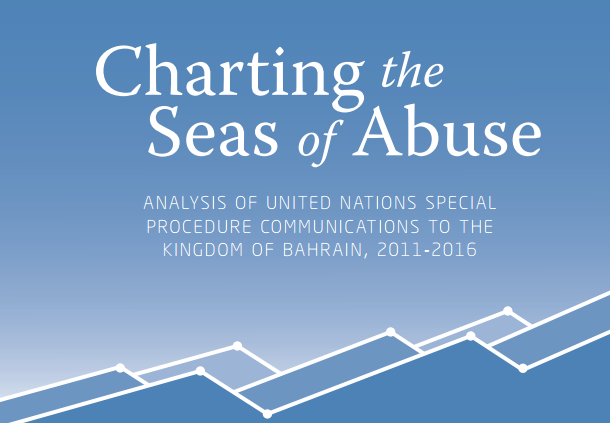 14 June 2016, Washington DC – On 14 February 2011, thousands of demonstrators took to the streets of Bahrain calling for more democracy and greater political liberties. A majority of Bahrain’s population participated in the peaceful protests, occupying the Pearl Roundabout, a symbol of the country. The Government of Bahrain’s response to the demonstrators and their demands was not peaceful. Beginning in February 2011, the Bahraini government embarked on a systematic campaign of repression to silence activists, suppress dissent, and preclude opposition. This campaign has not ended. It continues to this day, with protests and violent clashes nearly nightly.

The United Nations (UN) Special Rapporteurs, a body of independent experts associated with the United Nations, have tracked this unrest since it first garnered international attention in 2011. In the five-year period between then and now, the mandates of 11 Special Rapporteurs have combined to issue around 60 communications, many jointly issued. These 60 communications have gathered 217 Special Rapporteur signatures between them. The communications detail the Government of Bahrain’s systematic efforts to discriminate against its Shia population and suppress opposition to its rule. In this way, it targets human rights defenders and political activists. The communications also allege the government’s repeated violation of its populace’s right to freedom of expression, assembly, and association. In addition to filing the communications, seven Procedures—torture, expression, assembly, human rights defenders, extreme poverty, migrants, and arbitrary detention—have outstanding visit requests to Bahrain since 2011.

In Charting the Seas of Abuse: Analysis of United Nations Special Procedure Communications to the Kingdom of Bahrain 2011 – 2016, Americans for Democracy & Human Rights in Bahrain (ADHRB), the Bahrain Centre for Human Rights (BCHR), and the Bahrain Institute for Rights & Democracy (BIRD) track the work of the Special Procedures to document the ongoing human rights violations in Bahrain. The new report seeks to both catalog the communications and the government’s responses for efficient reference and also provide added context for the disturbing trends of abuse revealed by a comprehensive examination of the Special Procedures’ work.

Taken in their entirety, the Bahrain-focused communications of the Special Procedures fully describe the campaign of repression waged by the Bahraini government. However, while as a whole the communications offer a thorough view of Bahrain’s human rights situation, an analysis of each Rapporteur’s individual comments is valuable for detailing various patterns of abuse, discrimination, violations of fundamental human rights, marginalization, and outright violence. This report therefore sets out to present an analysis of these communications by examining trends and patterns in the issues the Rapporteurs expressed concern. Each section of the report concerns a cluster of mandates—as with the section on torture and extrajudicial killings—or a single mandate—as with the section concerning religion. It finds that the Rapporteurs, and thereby the UN, express varying but universally significant concern regarding a host of human rights issues in the country, including most prominently torture and killing, due process issues, and free expression and assembly but also cultural issues, extreme levels of poverty, and public health.