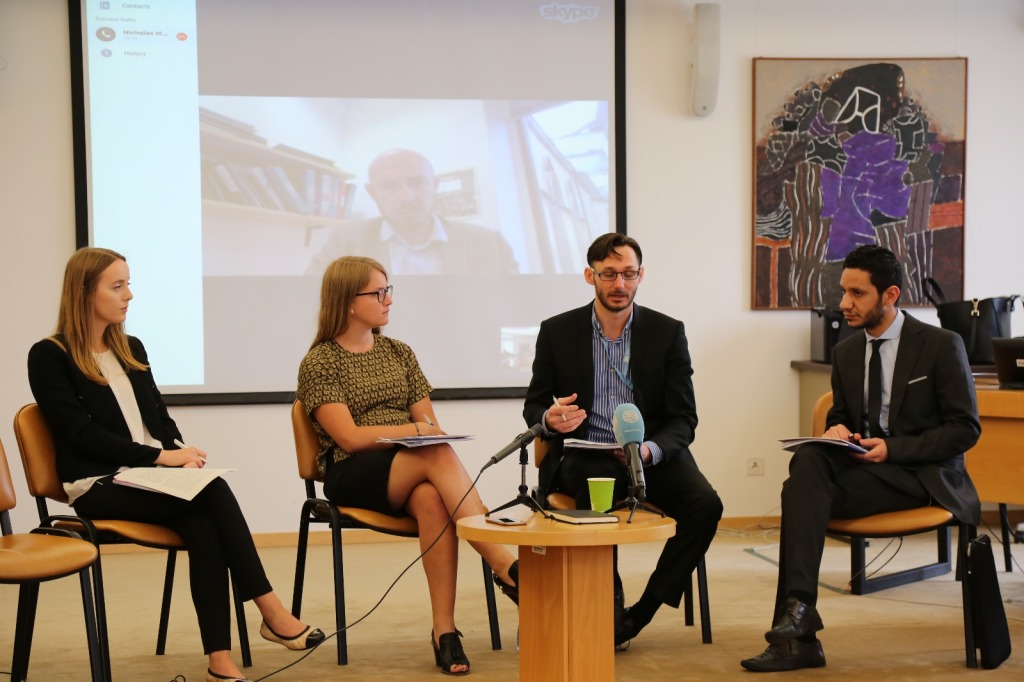 Jeremie Smith, Director of the Geneva Office at the Cairo Institute for Human Rights Studies (CIHRS) moderated the panel. He opened the event by thanking participants despite the difficulties faced by the recent travel bans preventing Ebrahim Demistani, from the Bahrain Nursing Association, and Husain Radhi, from the Bahrain Center for Human Rights, from joining the panel.

Amanda Milani, ADHRB’s UN Liaison, spoke about the overall situation in Bahrain. She discussed Bahrain’s lack of political will to cooperate with the OHCHR, despite their public announcements of such commitment. There has not been an agreed programme of cooperation with the OHCHR, which means that there have been no practical outcomes. She then spoke about the recent bilateral cooperation agreement between Bahrain and the Government of Switzerland, arguing that these agreements need to outline concrete benchmarks which show genuine actions to improve the human rights situation on the ground. There are systematic and continuous violations on the ground, which are outlined by ADHRB’s recent report. She stated that the Human Rights Council must react to this; there have been five different HRC Joint Statements which remain largely unaddressed.

Sayed Ahmed Alwadaei, BIRD’s Director of Advocacy, discussed recent developments in Bahrain, including the travel ban preventing civil society from participating in the 32nd session of the Human Rights Council and the arrest of human rights defender Nabeel Rajab. He spoke on the lack of implementation of the BICI recommendations and gave examples of continued torture, stating that torture is still taking place systematically in Bahrain and that there is a serious lack of accountability. Following this, he discussed the UK technical assistance to Bahraini institutions, including the Ombudsman, NIHR, PDRC, and said that UK assistance has been ineffectual in bringing these institutions into conformity with international standards. He ended by discussing the case of Mohammed Ramadan, a Bahraini sentenced to death on the basis of a confession coerced under condition of torture.

Sara Katrine Brandt, Policy and Research Officer at CIVICUS, began her speech by discussing her work on Bahrain, in particular on shrinking civil society space, attacks on journalists, and the criminalisation of national and international human rights groups. She stated that the attack on community activism in Bahrain is very concerning. She then argued that while international pressure is working, it is getting more and more difficult, and it is unfortunate to see how the Bahraini government is becoming emboldened in its repression. The forced exile of Zainab Al-Khawaja and the arrest of Nabeel Rajab on the first day of the Human Rights Council are serious signs of deterioration that indicate that the government has no intention of conducting reform or respecting human rights. Sara closed by stating that the situation has deteriorated so gravely that the Human Rights Council must pass a resolution on human rights in Bahrain.

Nicholas McGeehan, the Bahrain, Qatar and United Arab Emirates Researcher at Human Rights Watch, joined the discussion on Skype. He gave an overall picture of the recent abuses in the country before briefly discussing the different institutions in Bahrain and their ineffectiveness. He stated that the lack of accountability in Bahrain is a clear sign that these institutions fundamentally do not work. Torture is still ongoing because there is no accountability.