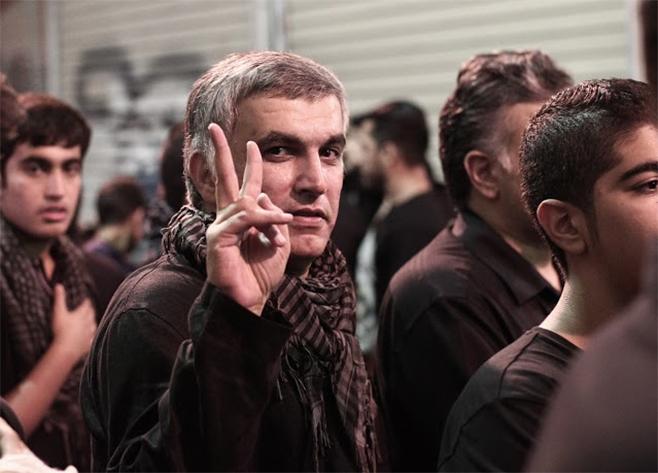 21 December 2016 – Bahraini authorities have today interrogated imprisoned human rights defender Nabeel Rajab on allegations stemming from a letter he recently published in the French newspaper Le Monde. The undersigned NGOs condemn in the strongest possible terms any further legal action against Rajab for exercising his fundamental right to free expression and call on the Government of Bahrain to secure his immediate release.

According to a spokesperson for the Department of Anti-Corruption, Economy, Security, and Electronics, the Ministry of the Interior’s Cybercrime Unit has removed Rajab from custody in order to question him over the contents of a Le Monde article published in his name on 19 December. The Cybercrime Unit has accused Rajab of using the article to “spread false information and tendentious rumors” that insult Bahrain and the Gulf Cooperation Council (GCC) states” and harm their relations.

In the article, Rajab writes: “In September, when I wrote an open letter to the US administration, the Bahraini government brought new charges of damaging Bahrain’s reputation against me.” He added, “France and Germany, you need to reassess your relationship with these monarchies, which actively work against democracy and human rights and fan the flames of violence and extremism…My trial is not exceptional, it is ordinary. Thousands of Bahrainis are in prison for voicing criticism and demonstrating against the government, and thousands more have been murdered across the Arab world for daring to exercise their right to self-determination. That is truly appalling.”

Sayed Ahmed AlWadaei, Director of Advocacy at the Bahrain Institute for Rights and Democracy (BIRD) said, “As Nabeel Rajab exposes the thin skin of the Bahraini government he continues to pay the price for exercising his right to free opinion. If France does not speak up against Bahrain’s outrageous actions, its silence will be seen as a betrayal of human rights by the supposed champions of free speech in Europe.”

Rajab, president of BCHR, has been detained since June 2016 on separate charges related to his use of Twitter, including comments discussing torture in Bahrain and criticizing the Saudi-led military intervention in Yemen. If convicted of these charges, he could face up to 15 years in prison. Moreover, as Rajab noted in his Le Monde article,  Bahraini authorities issued an additional 1-year charge against him for another letter  published in the New York Times in September.

“Nabeel Rajab’s recent letters remind us of Martin Luther King Jr.’s Letter from a Birmingham Jail,” said Husain Abdulla, Executive Director of Americans for Democracy & Human Rights in Bahrain (ADHRB).  “Like King, Nabeel is a true champion of human rights. President Obama rightfully admires Martin Luther King Jr. and other civil rights activists for their struggle to secure equality in the United States, and his administration must recognize that same principled fortitude in the face of repression here, in Nabeel’s case. President Obama must take clear action by suspending arms sales to Bahrain immediately and repeat his call for his Nabeel’s immediate release”

The right to freedom of expression is protected under Article 19 of the Universal Declaration of Human Rights (UDHR) and Article 19 of the International Covenant on Civil and Political Rights (ICCPR), the latter of which Bahrain acceded to in 2006. We, the undersigned organizations, call on the Government of Bahrain to respect the right to freedom of speech and release Nabeel Rajab and immediately drop all charges against him. We also strongly urge the Government of France to publicly call for Nabeel Rajab’s release and the release of all other prisoners of conscience in Bahrain.