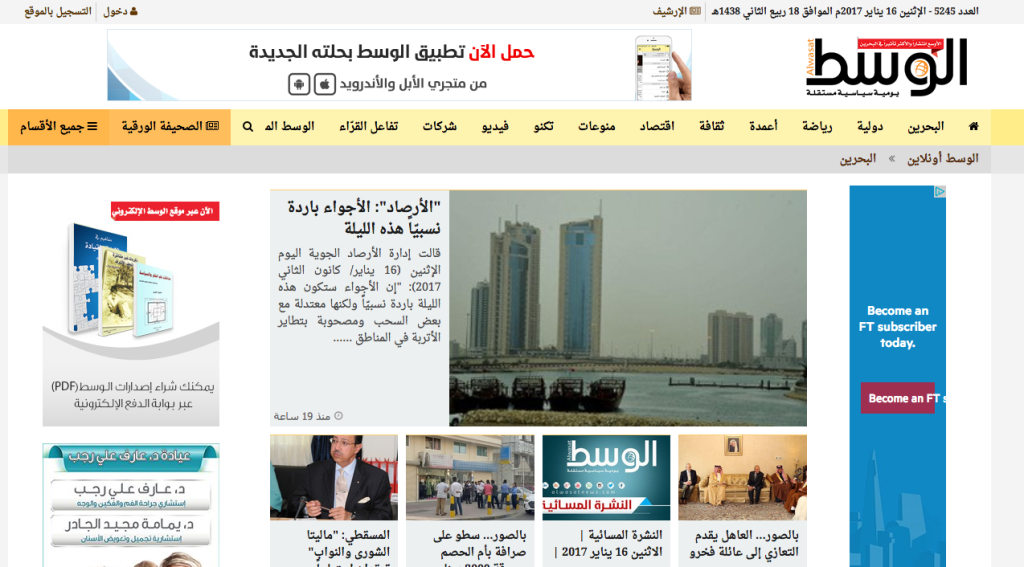 17 January 2017 – Bahrain’s Ministry of Information Affairs (MIA) yesterday issued an order to suspend the only independent newspaper in the country, Alwasat, from using electronic media tools, effectively suspending its online presence. The order comes a day day after the execution of three torture victims, and on the day the trial of journalist Nazeeha Saeed started for “unlicensed journalism”.. We, the undersigned NGOs, condemn the attack on the freedom of the press, and the ongoing harassment to the Alwasat newspaper.

The MIA alleges that Al-Wasat has been “inciting spirit of division and harming national unity,” but  provided no further basis for this accusation. The MIA ban is partial, and Alwasat’s print edition has not been suspended from publication. The MIA’s action and reasoning unreasonably restrict the newspaper’s expression and the freedom of the press. AlWasat is the only newspaper in Bahrain that led its 16 January print edition with frontpage headlines of the 15 January execution.the  Alwasat’s article featured photos of the executed victims, along with views of the independent local and international NGOs, and reporting on the popular reaction on the streets.

Despite harassments, Alwasat newspaper have been active in covering the local news with independent views to certain limits, and had a wide reach. Alwasat’s website is consistently ranked among the most popular websites in Bahrain, and in January 2017 was the highest-ranking site in the country, according to ranking site Alexa.

The suppression of Alwasat’s online edition came a day after Bahrain executed Ali Al-Singace (21), Abbas Al-Samea (27) and Sami Mushaima (42) by firing squad, the first political execution in Bahrain since 1996. The three were convicted on anti-terrorism charges in an unfair trial based on evidence extracted under condition of torture. The trial and appeals hearings lacked basic fair trial guarantees, and the UN Special Rapporteur on Extrajudicial Executions has condemned their executions as “extrajudicial killings.”

Alwasat, established 2002, is the only newspaper in Bahrain financially and editorially independent from the state, and has been the subject to ongoing and repeated acts of harassment in the past few years. In 2010, it was banned from broadcasting audio reports and interviews on its website. In April 2011, the MIA suspended the newspaper from publishing for a day , and only allowed it to resume operations after the resignation of senior editorial staff, including its editor-in-chief, Dr. Mansoor Al Jamri, and their replacement with pro-government staff; the company’s board later reinstated the editor-in-chief. . Karim Al-Fakhrawi, a businessman and co-founder of Alwasat, was arrested in April 2011 and died under the custody of the National Security Agency (NSA) under conditions of torture. The NSA, which was stripped of law enforcement powers in November 2011, recently had its powers reinstated.

In 2015, the MIA suspended the newspaper a second time for two days, allegedly because the paper had not to used the term “martyrs” in a report on Bahraini military casualties in Yemen. In January 2016, the MIA banned newspapers from using youtube for video reports, and Alwasat was forced to close its video section until August 2016, when the MOIA legislated to regulate newspaper video content. This regulation includes a 2-minute length limit to videos and registration of the operating staff with the MIA. Several of the newspapers editors and columnist have faced prosecutions for their posts over the years.

The repeated suspension of the newspaper and this latest suspension put the newspaper at significant financial risk as it is deprived of revenues from online advertising and subscriptions to its online archive. Inducing financial pressures on Alwasat will contribute to the restriction of media freedoms in Bahrain. In 2010, another independent newspaper, Al-Waqt, had to close doors due to financial difficulties caused by lack of advertisement aid.

Bahrain’s restrictions of media freedoms have been even wider reaching. Bahrain has denied multiple Bahraini reporters working for foreign news outlets from renewing their annual foreign correspondence licenses, restricting their work, and denied entry to even more independent reporters. The blocking of the only independent newspaper’s website will contribute to a media blackout on Bahrain news from reaching to the outside world and undermine the freedom of speech and expression in the country.

Based on the above, we urge the Government of Bahrain to: