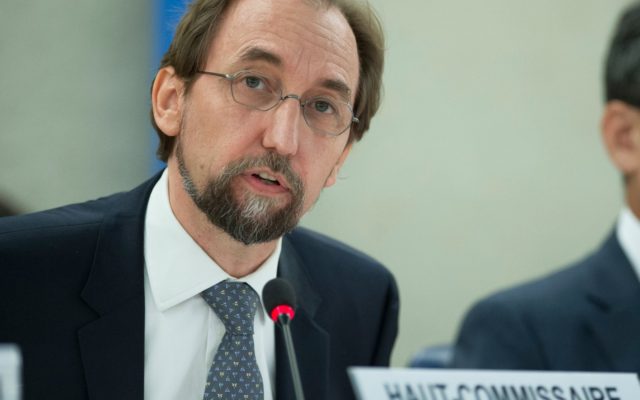 8 March 2017 – In his report to the 34th session of the UN Human Rights Council today, the UN High Commissioner for Human Rights, Zeid Ra’ad al-Hussein, raised the “increasing levels of human rights violations” in Bahrain, and called on the government to address these violations. He reiterated his position that, “this repression will not eliminate people’s grievances; it will increase them.” We in the Bahrain human rights community welcome the High Commissioner’s commitment to addressing the situation of human rights in Bahrain, and his dedicated efforts to de-escalate the rising crisis in the kingdom.

In his comments, HC Zeid called attention to Bahrain’s deeply troubling executions earlier this year. The High Commissioner expressed his deep regret towards these regressive trends in Bahrain, among others, to “retreat from formal or informal commitments to moratoria on the death penalty.” In January 2017, Bahrain unlawfully executed Sami Mushaima, Ali Al-Singace, and Abbas Al-Samea. All three men alleged that Bahraini authorities tortured them into providing the confessions that then served as evidence against them in court. The Government, the courts, and Bahrain’s national human rights mechanisms, utterly failed to consider and investigate these allegations.

The High Commissioner devoted specific attention to recent acts by the government to impose ”increasing restrictions on civil society and politics since June 2016, including intimidation, arrest, interrogations, travel bans and closure orders.”

Earlier this week, the Government of Bahrain began efforts to dissolve the country’s leading secular opposition society, Wa’ad. Targeting Wa’ad is only the government’s latest move to smother the already shrinking political space inside the country. In June 2016, Bahraini authorities also shut down al-Wefaq, the largest opposition political society in the kingdom.

In addition to closing political space, Bahraini authorities continue to target human rights defenders and civil society for reprisals. Such reprisals have been conducted through the use of travel bans, which the government places on Bahraini activists to prevent them from engaging in legitimate human rights work with international bodies like the UN Human Rights Council. Leading civil society members, like human rights defender Nabeel Rajab, are among those targeted in the recent targeted restriction highlighted by the High Commissioner. Bahraini authorities have detained Rajab since June 2016. He faces up to 18 years in prison on charges related to tweets about Saudi-led coalition airstrikes in Yemen and exposing torture in Bahrain’s Jau Prison, and for giving interviews to journalists.

HC Zeid expressed his deep concern over the rising human rights violations in the kingdom, and condemned the government’s repression. Just this year, the government expanded the arrest powers of the National Security Agency (NSA) and approved a measure allowing civilians to be tried in military courts. The NSA was involved in the torture of peaceful protesters during 2011 and the death of at least one detainee, and the withdrawal of its arrest powers was one of the few BICI recommendations that the Government of Bahrain fully implemented. Reinstating these powers is therefore an extremely disappointing reversal on a shamefully weak effort at genuine reform. In another move that recalls the 2011 protests and subsequent government crackdown, Bahrain’s legislature this week approved a constitutional amendment that would allow military courts to try civilians.

Finally, the High Commissioner called on the government to undertake confidence building measures to address these troubling trends, stating, “I call on the Government of Bahrain to undertake concrete confidence building measures, including allowing my Office and Special Procedures mandate holders to swiftly conduct visits.” Bahrain has continually denied access to special procedure requests for country visits. While no special procedures have visited the kingdom since 2006, the mandate holders have continuously been engaged on cases of human rights in Bahrain. Most recently, the special procedures released reports regarding reprisals against human rights activists, dissolving al-Wefaq, the persecution of Bahrain’s Shias, and the arbitrary detention of Nabeel Rajab.