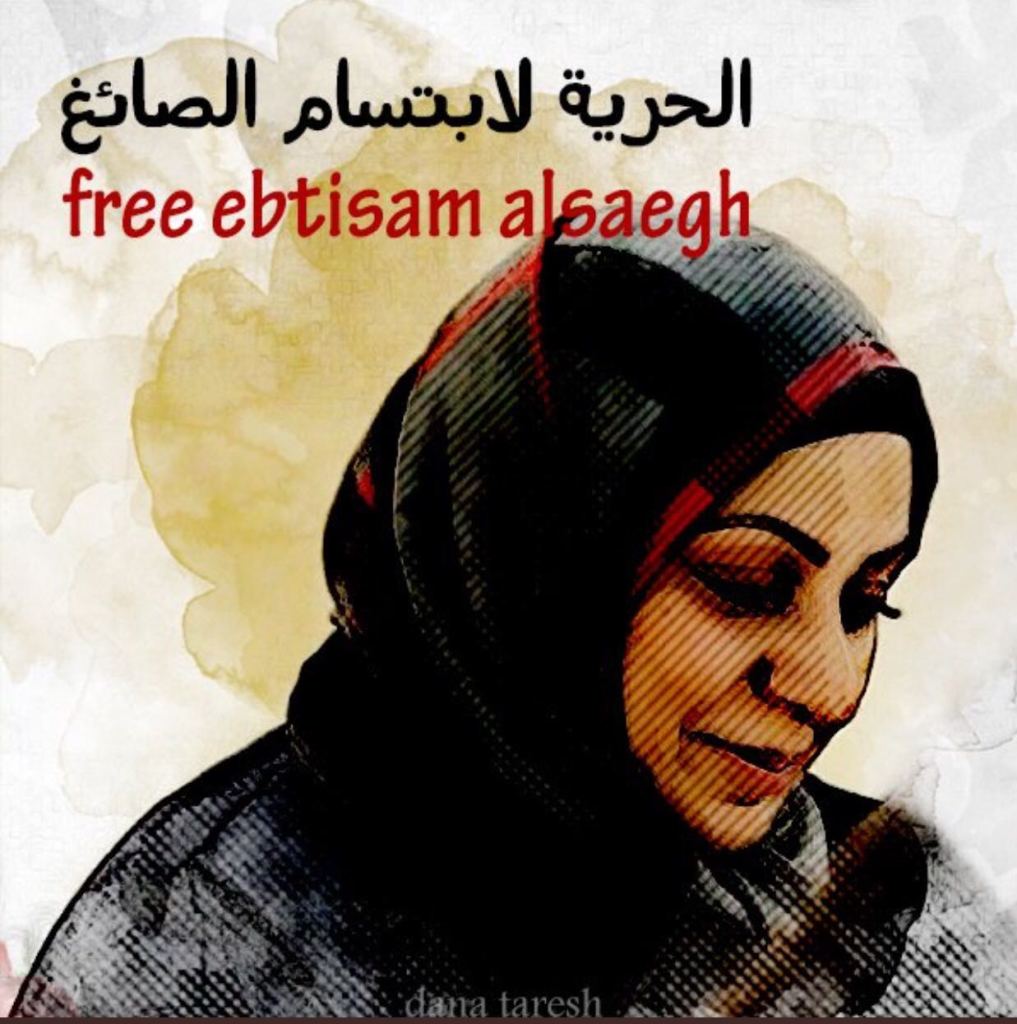 4 July 2017 (Updated)– The whereabouts of Ebtisam Al-Sayegh, 48, is unknown after security forces arrested the human rights defender in a midnight raid on her home last night. This comes a month after Al-Sayegh was arrested, tortured and sexual abused on 23 May by the National Security Agency (NSA). Her family believe that last night’s arrest was conducted by the NSA, an institution whose director is Sandhurst graduate Sheikh Talal Al Khalifa.

The Bahrain Institute for Rights and Democracy (BIRD) condemns Ebtisam Al-Sayegh’s arrest and call for her immediate and an independent investigation into her arbitrary detention and ill-treatment in July and torture and sexual abuse in May.

Sources told BIRD that two detainees saw Ebtisam Al-Sayegh looking “miserable” and “beaten” in the Isa Town Women’s Prison in the early hours this morning. Inmates at the prison were unusually barred from leaving their cells for breakfast this morning, and it is believed that this was done to prevent them from seeing Al-Sayegh. Inmates were locked in their cells until 10:30 AM.

Forces arrested woman human rights defender Ebtisam Al-Sayegh in a midnight raid on her home. She is believed to be detained by the National Security Agency, and is at high risk of torture. Al-Sayegh was tortured at the NSA building in Muharraq in May. The NSA is the cite of many recent torture allegations and is headed by Sheikh Talal Al Khalifa, a Bahraini royal and Sandhurst graduate.

Police surrounded her home in five civilian cars and a minibus at 11:45 PM (GMT+3). Masked, civilian-clothed officers conducted the arrest. BIRD has spoken to Al-Sayegh’s family, who believe she was arrested by members of the NSA. No arrest warrant was presented. Al-Sayegh was preparing to sleep when the police came. The officers, all masked, had body and head cameras and were armed. They demanded her mobile phones and her CPR card (her national ID card). When the family asked for the purpose of the arrest, the officers gave no information and did not state where they were taking her. Two masked, civilian-clothed female officers cuffed and detained Al-Sayegh.

The family told BIRD they are “100 per cent” sure that the NSA conducted the arrest.

On 26 May 2017, Al-Sayegh was summoned to Muharraq Police Station for questioning: there she was detained and tortured by NSA officers. The summons was in relation to her human rights activities: Al-Sayegh had been documenting the abuses in Duraz, where police killed five protesters and arrested nearly 300 more on 23 May. The UN has called the killings unlawful.

While there, NSA agents tortured and sexually abused Al-Sayegh. In an interview with BIRD, Al-Sayegh told BIRD: “The interrogator said ‘We are not the Criminal Investigation Directorate, we are the Intelligence, and I am called the torturer, my hobby is torture, my profession is to torture. I have the art of torture.’ He feels he is a torturer, and if I scream from now till tomorrow in this building, no one will be able to hear me or save me, not rights groups, not the UN, nothing.”

Al-Sayegh was blindfolded during the interrogation. She told BIRD: “He said ‘Extend your hand, what is this?’ I touched it, it was a sandal. He said, ‘I will use it to hit you over the head if you don’t answer.'”

“There was more than one man. They used their hands. I could hear the sound and heat of a lighter close to me. He was smoking throughout the interrogation and this lighter, in his hand, he kept lighting it. I was thinking, will he burn me? It was very close to me and I could feel its heat. I could hear the electric machine, but they didn’t use it. I heard it close to me.”

Amnesty International reported on her torture: “When she arrived [at Muharraq], she was immediately blindfolded, and in the subsequent hours, she was sexually assaulted, beaten all over her body, kicked in the stomach and kept standing for most of the seven hours she was being interrogated.” Read Amnesty International’s statement on Ebtisam Al-Sayegh here: https://www.amnesty.org/en/documents/mde11/6392/2017/en/