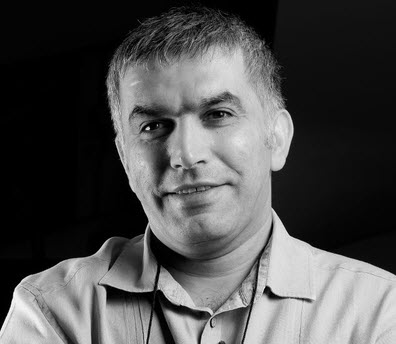 27 September 2017 – Leading Bahraini human rights campaigner Nabeel Rajab’s trial for tweeting on Yemen has been dealt another postponement, in the wake of Saudi Arabia’s threats to states calling for an independent investigation into human rights violations in the conflict.

This postponement coincides with Labour leader Jeremy Corbyn’s condemnation of the “cruel Saudi war in Yemen” and Bahrain’s “crushing of democracy” in his keynote speech at the party’s annual conference this afternoon.

Tomorrow, meanwhile, Rajab expects his first appeal hearing in relation to his sentencing in July 2017 to two years in prison on a separate charge of speaking to journalists.

Rajab, president of the Bahrain Center for Human Rights, must now wait until 19 November for the next hearing in his trial regarding tweets about Yemen. The court heard no pleadings today and postponed the case in order for a Ministry of Interior forensic expert to prepare a report.

The human rights campaigner faces up to 15 years in prison for “insulting a statutory body”, “spreading rumours in war time” and “insulting a neighbouring country”, namely Saudi Arabia. Today’s hearing marks the second one overseen by a new judge. In his previous hearing, on 11 September, the judge postponed the hearing until today – likely due to his unfamiliarity with the case.

Associated Press yesterday revealed a letter in which Saudi Arabia threatens at least two foreign countries that sending independent investigators to Yemen could “negatively affect” trade and diplomatic ties with the wealthy state. The kingdom’s letter warned that Arab states “will not accept” the Dutch-Canadian draft resolution at the current UN Human Rights Council session, which calls for an international, independent investigation.

Bahrain is one of the Arab states who tabled a competing draft resolution, requesting that the UN High Commissioner continue to “provide technical assistance and advice” to the National Commission of Inquiry to complete its investigatory work into allegations of violations and abuses committed by all parties to the conflict.

A UN debate is scheduled for this week and is due to conclude on Friday.

Sayed Ahmed Alwadaei, Director of Advocacy at BIRD, said: “At home in Bahrain Nabeel Rajab is on trial facing 15 years for comments about the bombardment of Yemen, while at the UN Saudi Arabia is threatening other countries over an investigation into human rights abuses in Yemen. Bahrain is shooting the messenger for peace and ensuring the Saudi-led coalition, of which it is a part, can get away with its crimes with impunity.”

Other Trials, Charges and Condemnation

On 11 September, the UN High Commissioner for Human Rights condemned Bahrain’s campaign of reprisals against civil society and its democratic “shut down.” High Commissioner Zeid Raad Al-Hussein said: “No public relations campaign can paper over the violations being inflicted on the people of Bahrain. They deserve real respect for their human rights.”

The following day, Rajab faced a new set of absurd charges after Bahrain’s Public Prosecution charged him for social media posts on Twitter and Instagram. The posts in question were made when he was already in police custody in January 2017, where he had no internet access. Rajab is already serving a two-year sentence for speaking to journalists.

The leading human rights campaigner was presented to the Public Prosecution on 12 September and charged with “spreading false news”, “inciting hatred against the regime” and “inciting non-compliance with the law” under articles 165, 168 and 172 of the Penal Code. The charges relate to messages posted on Instagram and Twitter accounts carrying Nabeel Rajab’s name, over which he had no control.

Rajab was returned to the Ministry of Interior Hospital where he has been hospitalised since April 2017, when he underwent surgery. BIRD condemns the judicial harassment of Rajab and calls for his immediate release and the dropping of all outstanding charges against him.

Rajab has been in police custody since June 2016, when he was arrested from his home in Bani Jamra. He also faces outstanding charges of “spreading false news” in relation to a Letter from a Bahraini Jail published in the New York Times in 2016.