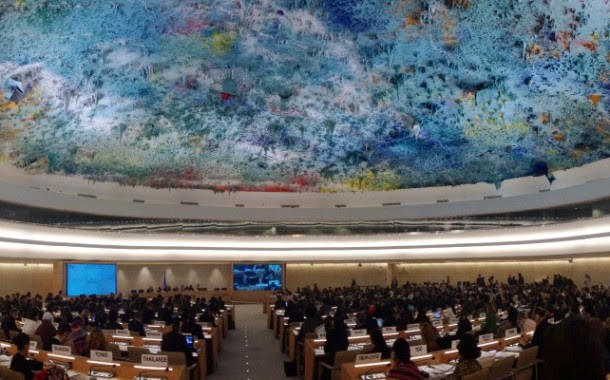 The following statement was delivered by ARTICLE 19 and the Bahrain Institute for Rights and Democracy, at the 36th Session of the Human Rights Council, as part of the Item 6 Debate on the adoption of Bahrain’s third cycle UPR.

The sheer number of recommendations to Bahrain addressing the rights to freedom of expression, peaceful assembly, and association, are indicative of the alarming human rights situation in the country, which has deteriorated since 2016. This present reality makes us question whether the acceptance of many of these recommendations will in fact translate to action towards implementing them.

We ask why, if the government intends to reverse its crackdown on freedom of expression, did they this week interrogate and place journalists Faysal Hayyat and Ahmed Radhi on a travel ban, alongside other activists?

We would like to know when the government intends to release photojournalist Ahmed Al Mousawi, arbitrarily detained since 2014, and the 9 other journalists currently detained in the country?

When will the government release human rights defender Nabeel Rajab, arbitrarily detained since June 2016, and human rights defender Ebtisam Al-Sayegh, arbitrarily detained since July 2017, and reportedly tortured, including through sexual abuse, by the National Security Agency while in custody during a prior detention in May 2017.

Will the government cease harassing the family members of human rights defender Sayed Ahmed Alwadaei, and release Nazar Sayed Namaa Alwadaei, Hajar Mansoor Hassan and Mahmood Marzooq? Will they receive redress for the ill treatment, possibly amounting to torture, inflicted on them since March 2017? Will “terrorism” charges against them be dropped?

We ask whether the government’s newfound commitment to freedom of expression will lead to the reversal of the illegal 4 June 2017 order to shutter Al Wesat, the sole remaining independent newspaper in Bahrain? Will proceedings to dissolve Wa’ad, the country’s leading secular, leftist opposition group, be halted?

Implementing the UPR recommendations the government has accepted necessitates comprehensive reforms to the web of legislation used to repress all criticism and opposition, and which intimidates so many to self-censor.

Human rights are not “safeguarded” by this national legislation, as the government claimed during this UPR, but are routinely violated through their enforcement.

We call on this Council to hold Bahrain to the commitments it has made today, so that the human rights defenders, journalists, political opposition and Shi’a religious leaders, as well as their families, no longer have to pay such a heavy price for exercising their rights.