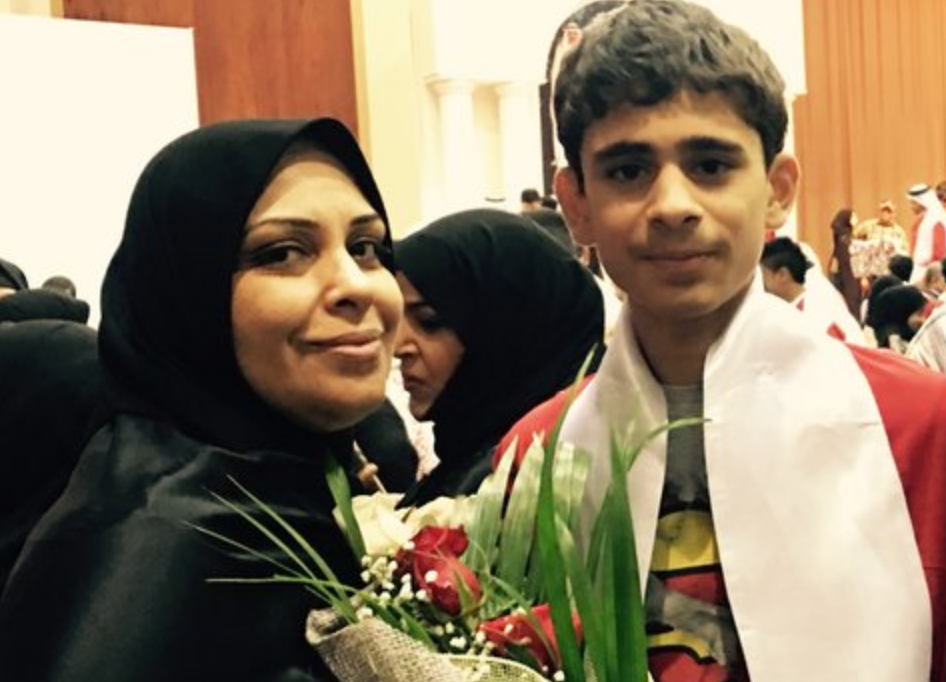 18 September 2017 – Fabricated criminal charges could send a London-based human rights defender’s family members to prison in Bahrain. Their trial today was postponed to 30 October for sentencing, after a court hearing which lasted just five minutes.

A Bahraini High Criminal Court is preparing to sentence the mother-in-law, brother-in-law and cousin of the Bahrain Institute for Rights and Democracy’s Director of Advocacy in a trial criticised by UN experts, Amnesty International and Human Rights Watch.

Hajar Mansoor Hassan told the court she is innocent and asked to be allowed to greet her son and nephew, her co-defendants. The defence lawyers requested that the torture allegations of the defendants be added to the case file. They also requested their release on bail. The judge refused all defence requests.

The trial of Hajar Mansoor Hassan, Nazar Alwadaei and Mahmood Marzooq is a reprisal targeting Sayed Ahmed’s family. Sayed Ahmed lives beyond the reach of the Bahraini government in the UK, where he helped found BIRD in 2013. BIRD wholly condemns the arbitrary arrest, ill-treatment, torture and unfair trial of Hajar, Nazar and Mahmood, who are being punished for Sayed Ahmed’s work as a human rights campaigner.

BIRD has obtained police forensic reports which analysed the fake explosives the family is accused of having set off in January 2017. The reports found no DNA, fingerprints or other physical evidence tying the defendants to the bombing.

Despite the total absence of evidence, it is feared they will be sentenced based on coerced confessions.

Human rights activists and organisations are no longer able to operate in Bahrain. In July, rights campaigner and Bahrain Centre for Human Rights president Nabeel Rajab was sentenced to two years in prison for speaking to journalists. He faces additional charges all related to his work and expression. Women’s rights activist Ebtisam Al-Sayegh was tortured and raped by the National Security Agency for her human rights work.

Amnesty International wrote to the Foreign & Commonwealth Office earlier this month calling attention to the reprisals against Sayed Ahmed Alwadaei’s family. They call it a “particularly disturbing development”. Amnesty International accused the UK of providing cover for Bahrain while it conducts its abuses, with UK Director Kate Allen saying: “Beleagued Bahraini activists feel betrayed by the UK’s stance on Bahrain.”

Amnesty International has called on Bahrain to drop all charges against Hajar, Nazar and Mahmood.

In a letter to Sayed Ahmed’s MP, Middle East Minister Alistair Burt said “We are aware of Mr Alwadaei and his organisation, the Bahrain Institute for Rights and Democracy. The British Embassy in Bahrain continues to follow the case of Hajar Mansoor Hassan and Nazar Sayed Namaa as it makes itself through the Bahraini judicial system.” The British Embassy attended the trial today.

Human Rights Watch condemned the case as “retribution” against the work of the London-based activist.

In September 2017 six experts from the United Nations Office of the High Commissioner for Human Rights (OHCHR) released a document revealing they had expressed “grave concern” to the Bahraini government in March at the allegations of arbitrary arrest, detention and treatment amounting to torture, which included death threats, of Sayed Ahmed’s three relatives.

The UN experts noted with concern that the actions were intended to “intimidate and impair the human rights activities” of Sayed Ahmed. They added, “they may have occurred, at least in part, in reprisal for Mr. Sayed Ahmed Mustafa Mohamed al-Wadaei’s cooperation with the human rights mechanisms of the United Nations, in particular his attendance to the 34th session of the Human Rights Council.”

The UN experts also saw “significant grounds” to assume the three individuals may be subjected to further ill-treatment while in detention.

Hajar and Nazar were interrogated extensively regarding Sayed Ahmed’s human rights work. After days of detention without official charges, the three individuals were presented with terrorism charges, based largely on coerced confessions and “confidential sources”.

Police forensic reports found nothing tying the defendants to the incidents. The forensic doctor report of the Public Prosecution found two bruises on the left side of Nazar’s back and bruises on his right knee and right elbow. Mahmood’s forensic medical report found redness on his back.

Security officials interrogated Hajar Mansoor, 49, for three periods each lasting around 11 hours between 5 and 7 March. Officers allegedly forced her to stand for extended periods and humiliated her with abusive language. Hajar fainted and collapsed, and was transferred to hospital on the first day of interrogations. The Public Prosecution’s forensic doctor found a needle mark on Hajar’s arm consistent with her hospitalisation.

They also allegedly threatened to cancel the family’s commercial licenses, suspend her husband’s pension payments and arrest her daughter, son-in-law and youngest son. Officials questioned Hajar Mansoor about who had contacted the US Embassy when security forces at Bahrain Airport detained her daughter (Sayed Ahmed Alwadaei’s wife) and infant grandson, a US citizen in October 2016.

Sayed Nazar, 18, was arrested without a warrant on 2 March, then detained for six days without official charge. He was reportedly subjected to ill-treatment, beaten and deprived of sleep for two days of interrogations. Officials threatened Sayed Nazar that they would continue “to take revenge on him” for Alwadaei’s human rights work, and tortured him into implicating family members in “wrongdoing”. The 18-year-old was allegedly told he would be killed if he did not sign the presented written confession and if he did not confirm this at the Public Prosecution office.

Mahmood Marzooq, 29, was also arrested without a warrant on 2 March alongside his cousin Sayed Nazar,  and held for six days without official charge. During his interrogation he was allegedly threatened, ill-treated and coerced to sign a false confession. Mahmood’s lawyer was not present.

On 8 March all three individuals were presented with terrorism-related charges. The evidence is allegedly limited to “confidential sources”, their coerced confessions, and fake explosives that authorities claim to have found. All three deny the charges.

In May, the UN Committee Against Torture raised concerns of the “the widespread acceptance of judges of forced confessions.”