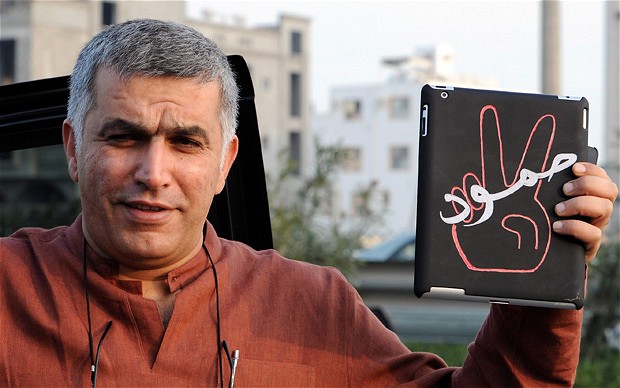 26 October 2017 – Bahraini authorities yesterday transferred human rights defender Nabeel Rajab from a clinic to the notorious Jau Prison despite severe medical risks, subjecting him to humiliating treatment on arrival. Rajab was sentenced to two years in prison in July 2017, and faces up to 15 years in prison in separate trial, in which one of his charges is “insulting a statutory body”, after he exposed torture in Jau Prison two years ago. In total, he faces up to 17 years in prison. The Bahrain Institute for Rights and Democracy (BIRD) condemns the humiliating treatment of Nabeel Rajab.

Prison officials have imprisoned Rajab, who is President of the Bahrain Center for Human Rights, in the very same cell in which he spent his previous two-year sentence (2012-14). On arrival in Jau Prison, guards immediately searched him in a humiliating manner and shaved his hair by force. They further punished him by confiscating his books and clothes. Last night, guards raided his cell and began shouting loudly. The prison officials also repeated their search of him in the middle of the night, in an apparent move to punish and humiliate the human rights defender.

One of Rajab’s charges, for which he is currently in court for (see “Nabeel Rajab’s Charges” below) is that he spoke out about the degrading treatment in Jau Prison. Rajab had exposed torture in Jau Prison in March 2015. The evidence he and the BCHR gathered was highlighted in a joint NGO report report, Inside Jau. Human Rights Watch also reported on the same incidents of abuse torture as Rajab.

Rajab now endures degrading treatment himself. He is isolated from other prisoners convicted for speech-related crimes; he is instead detained in a cell with people convicted of being transgender, which is considered a criminal offence in Bahrain.

Yesterday Rajab’s wife had a call from Bahrain’s Criminal Investigative Directorate (CID) to tell her that her husband was to be transferred and she needed to collect his belongings, as he would no longer require them. This is the second week that prison officials have cancelled family visits with no explanation.

Husain Abdulla, founder and Executive Director of Americans for Democracy and Human Rights in Bahrain (ADHRB): “The Bahraini authorities’ flagrant disregard for the well-being of Nabeel Rajab, a globally renowned human rights defender, is an outrage. The Government of Bahrain should be internationally condemned for allowing this dangerous, degrading handling of an individual imprisoned only for his words.”

Sayed Ahmed Alwadaei, Director of Advocacy, BIRD: “Bahrain’s contempt and disregard for Nabeel Rajab’s human rights campaigning is summed up in the degrading treatment they are putting him through in the notorious Jau Prison. The UN Committee Against Torture condemned his solitary confinement in May, and now they have ignored his human rights and the international criticism by locking him away in isolation again.”

In early April 2017, Rajab was admitted to the Bahrain Defence Force hospital for vital surgery. He was transferred back to police custody just a day later, before having recovered from his operation, and his health deteriorated significantly. From there he was transferred to the Ministry of Interior Clinic (Al-Qalaa).

The previous month, in March 2017, Mohammad Sahwan died of sudden cardiac arrest in Jau Prison, the country’s largest long-term male detention facility. Sahwan was a victim of excessive use of force by police in 2012, and was the first political detainee to die in Jau Prison since 2011.

In early 2017, the Government of Bahrain intensified restrictions on inmates at Jau Prison, particularly targeting political prisoners and prisoners of conscience for increased abuse. Prison officials subjected the remaining eleven members of the “Bahrain 13” to severe deprivation of medical care.

Rajab is currently serving a two-year prison sentence, after having been sentenced in absentia on 12 July to two years in prison on charges of “spreading false news” under article 134 of Bahrain’s Penal Code. His appeal began in September, but was this week postponed to 8 November for final arguments.

Rajab has been detained since his arrest on 13 June 2016. He was held largely in solitary confinement in the first nine months of his detention, violating the UN Standard Minimum Rules for Non-Custodial Measures (Tokyo Rules) which state: “pre-trial detention shall be used as a means of last resort in criminal proceedings, with due regard for the investigation of the alleged offence and for the protection of society and the victim.”

Rajab faces a concurrent trial in which he faces up to 15 years in prison on charges related to his tweets exposing torture in a Bahraini prison (“insulting a statutory body”) and criticising the humanitarian cost of the war in Yemen (“spreading rumours in wartime” and “insulting a neighbourly state”, referring to Saudi Arabia).

In September 2017, a new set of charges were brought against Rajab related to social media posts made in January 2017, when he was already in detention and without internet access. Rajab also faces a fourth set of charges related to a letter he penned to the New York Times in September 2016. The UN Committee Against Torture has called for Rajab’s release.