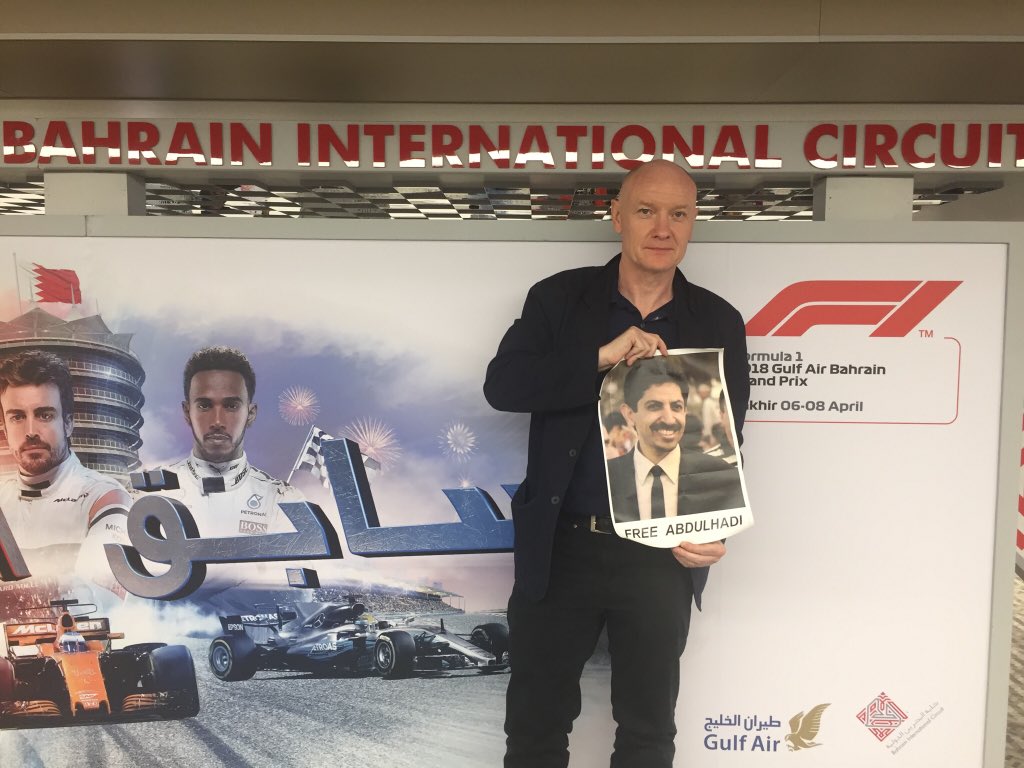 4 April 2018, Bahrain today refused entry to Lars Aslan Rasmussen, a Danish Member of Parliament, and to Brian Dooley of the Gulf Centre for Human Rights (GCHR), claiming the two posed a “security risk.”

The two arrived in Bahrain around 2am local time in an attempt to visit jailed human rights defender Abdulhadi Al Khawaja, a Danish citizen and founder of GCHR.  Al Khawaja was arrested in April 2011, tortured, and given a life sentence after an unfair military trial.

“We came to show that Al Khawaja and the other human rights activists in prison are not forgotten, and to remind the Danish government that it should be pressing much harder for his release,” said Rasmussen.

The pair arrived as Bahrain prepares to host this week’s Formula One race.

Dooley has documented human rights abuses in Bahrain since 2011 and has been banned from the country for six years.

“Bahrain needs to be constantly challenged about it torture, its targeting of human rights activists, its banning of the political opposition,” he said. “Preventing members of parliament, human rights groups and journalists from entering the country shows how much the regime has to hide. Formula One fans planning to arrive this week should know what they’re getting into. Bahrain has become an out and out police state.”

Al Khawaja is former President of the Bahrain Centre for Human Rights (BCHR), a former Middle East and North Africa Protection Co-ordinator for the Dublin-based international human rights defender organization Front Line Defenders, a member of the International Advisory Network of the Business and Human Rights Resource Centre, and the winner of several international human rights awards.  He founded the GCHR days before his arrest on April 9, 2011.

Since then, Bahrain’s leading human rights defenders have been forced into exile or, like Al Khawaja, Nabeel Rajab and Naji Fateel, sentenced to long prison terms after unfair political trials.

“Al Khawaja is a Danish citizen and I came to Bahrain to meet him, and to tell him that we are raising his case in the Danish parliament and across Europe. He is a peaceful human rights leader, respected across the world for his work. It’s a scandal we were prevented from entering the country to see him” said Rasmussen.

Rasmussen is a member of Denmark’s Social Democratic Party, and Brian Dooley is on the advisory board of the GCHR.

“Seven years after the start of the pro-democracy revolution in Bahrain, it seems the world has forgotten the victims of the Bahraini regime, those tortured and imprisoned for demanding basic rights. This brave action by Brian Dooley and Lars Aslan Rasmussen is a reminder to prisoners of conscience that they are not forgotten.

At a time when the Bahrain regime is trying to whitewash its image and prepare for the formula one race this week, they seem to fear human rights supporters and brand them as a security threat. A day before our fathers 57th birthday, seven years after his imprisonment and the horrific torture he endured, we call on EU states & the Danish government to review their polices & intensify their efforts to secure the release of our father and other prisoners of conscience.”

What is #Bahrain trying to hide. Why they fear human rights expert like @dooley_dooley or parliamentarian like @lars_aslan

Every minute Abdulhadi spends in his prison. it shames Alkhalifa rulers#FreeAbdulhadi pic.twitter.com/TbDej5dfwc