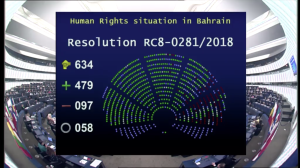 14 June 2018 – Today, the European Parliament (EP) adopted a Resolution (RC8-0281) on the human rights situation in Bahrain, notably the case of the country’s leading human rights defender, Nabeel Rajab, who is serving seven years for exercising his freedom of expression.

Amid the increased number of executions, death sentencings, torture and ill-treatment, the Resolution addresses the “increased crackdown on human rights defenders” which aims at impairing their “peaceful work” by imposing “prison sentences, exile, travel bans, revocation of citizenships or severe threats and intimidation”.

The Resolution calls for the “immediate release of all those detained solely for their peaceful human rights and political activities…including the immediate and unconditional release of Mr Rajab” and the “end to all acts of violence, harassment, intimidation… and censorship of human rights defenders”.

Of the 634 Members of European Parliament (MEPs) involved in the vote:

The Bahrain institute for Rights and Democracy (BIRD) welcomes this Resolution as an important step towards the improvement of the deteriorating human rights climate in Bahrain.

Sayed Ahmed Alwadaei, Director of Advocacy, BIRD: “This is a landmark resolution. The Bahraini government has equated Nabeel Rajab’s expression of the truth to harming the reputation of the country. In reality, nothing is more detrimental to Bahrain’s image than the international scrutiny it receives for repressing and incarcerating human rights defenders”.

During the Plenary Session, Julie Ward MEP stated: “I am horrified by the state of affairs in Bahrain particularly in light of the involvement of several European governments, including my own. The British government’s complicity in grave and systematic human rights violations in Bahrain is unacceptable and needs to be called out. I call on the Bahraini authorities to immediately and unconditionally release Nabeel and all political prisoners.”

Details of the Resolution

The resolution highlights the incarceration of Nabeel, who has been convicted for two separated charges. In July 2017 Nabeel was sentenced to two years in prison for speaking to journalists. Nabeel Rajab was initially arrested on 13 July 2016 and this week marks two years of his imprisonment. In February 2018, Nabeel was sentenced to five years imprisonment for expressing critical comments on social media. Rajab tweeted his condemnation of the airstrikes in Yemen mounted by the Saudi-led coalition and exposed the widespread torture occuring in Bahrain’s infamous Jau Prison.

The EU Parliament deplored the “poor prison conditions” Nabeel is being subjected to, which have significantly worsened his health over time. His family have reported that he is locked in his cell for 23 hours a day “as a form of punishment”, while prison authorities have repeatedly denied him access to necessary medical treatment.

The Resolution further declares Nabeel “a symbol for human rights defenders and respect of freedom of expression in Bahrain” and describes his prosecution as running “counter to the Government’s own commitments”.

The Resolution also scrutinises the lack of independence and effectiveness of Bahraini oversight bodies mandated to investigate human rights abuses. These bodies cause “a lack of accountability within the Bahraini Government and security forces” and foster “a culture of impunity that undermines democratic reform attempts and serves to further destabilise the country”.

“The cases of Nabeel Rajab abdulhadi al Khawaja and many others demonstrate Bahrain’s complete disregard for freedom of expression. I am also very concerned by the situation of Sayed Ahmed Alwadaei whose family have been judicially harassed and detained with allegations of torture simply because of his peaceful human rights activities

The Bahraini government’s attacks on democracy become more serious every day. Ahead of elections set to take place in the autumn, the authorities have passed a bill banning members of dissolved opposition groups to run for elections, depriving more than 100 people of their citizenship and increased their use of the death penalty.

I am horrified by the state of affairs in Bahrain particularly in light of the involvement of several European governments including my own. The British government’s complicity in grave and systematic human rights violations in Bahrain is unacceptable and needs to be called out and I call on the bahraini authorities to immediately and unconditionally release Nabeel and all political prisoners.”