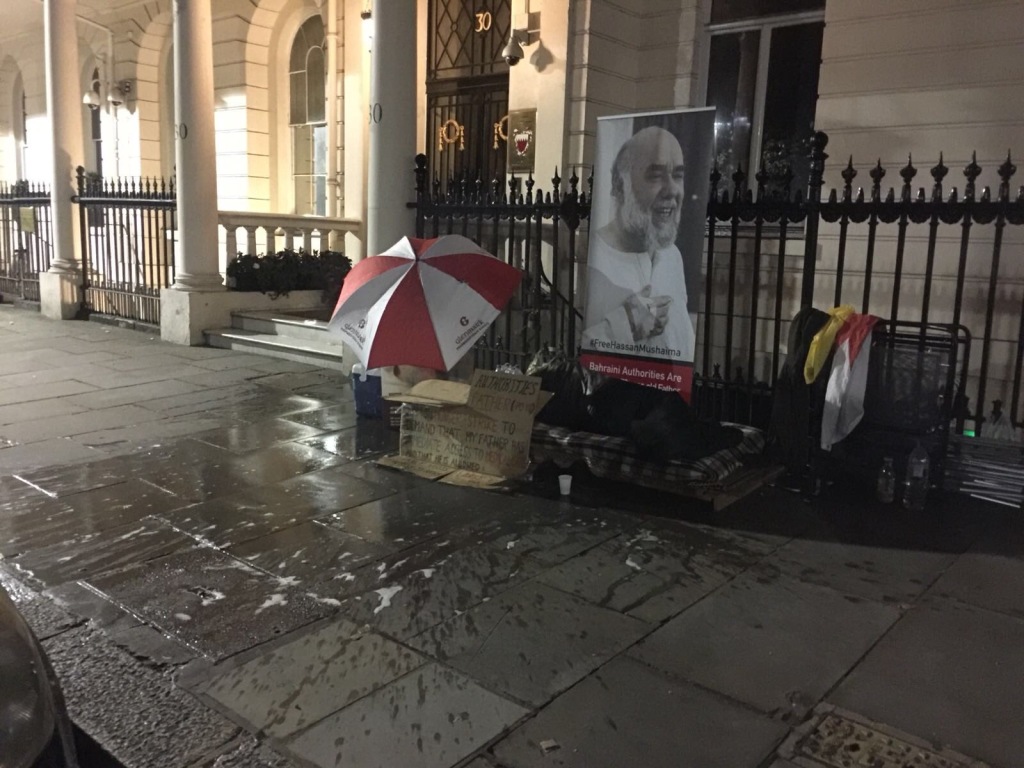 London – 12 August 18, Last night at 1.50am an unidentified member of the Bahrain Embassy in London threw a foamy liquid from the Ambassador’s balcony down onto a political opponent who was peacefully protesting on the pavement below.

Ali Mushaima, 35, was asleep when the incident happened and was woken by large amounts of liquid that ripped his umbrella. At first he feared it was an acid attack and police were called to the scene. Mushaima said to the police, “What if next time this is real acid?”

Officers from the Metropolitan police’s elite diplomatic protection unit tried to speak to embassy but no one answered the intercom and the Vienna convention prevented them accessing the building at 30 Belgrave Square.

The Ambassador’s bodyguard was seen entering the building around 7 o’clock on Saturday evening and no one saw him leave since.

The protestor, Ali Mushaima, is on the twelfth day of a hunger strike outside the embassy. He is raising awareness about his father, Hassan, a Bahrain opposition leader who was jailed for life over his part in the Arab Spring pro-democracy movement.

Hassan is now 70 and has suffered from cancer. He needs regular scans but has not had a cancer check up for nearly two years. His family have not been able to visit him for 18 months.

This is not the first time Bahrain Embassy staff have attacked peaceful demonstrations outside the building. In January 2017, they poured hot water onto protestors who were highlighting the execution of three Bahraini prisoners, including Ali’s cousin Sami Mushaima.

The Mushaimas are a high profile opposition family in Bahrain. Ali’s second cousin was the first person to be killed by riot police during the Arab Sping uprising.

The latest edition of London’s Diplomat List shows that ten Bahraini officials are registered at the Embassy, including a Captain. Their names are:

Ali Mushaima said: “This could be just the start of such attacks and now I really fear for my safety here in the UK. This time the attack was by the embassy staff, next time they could hire anyone to hurt me or even assassinate me. I do believe the action that happened last night at the embassy could not have happened without the direct instruction from the ambassador. I ask the Metropolitan police to investigate this and hold those abusers into account. At first I thought this was an acid attack on me. Next time I really don’t know if it’s going to be real acid.

“My demands are very basic. I went on hunger strike outside the Embassy to save my imprisoned father, a prisoner of conscience. I am calling for adequate medical care, family visits and access to books. And now instead of resolving this the Embassy is resorting to these tactics to silence me here in the UK. I appeal to the Foreign Office now, which often says it is a Bahraini matter that they can do nothing about, that this happened on British soil, by your ally and we need protection.”

1) Last night at 1.50am an unidentified member of the #Bahrain Embassy in London threw a foamy liquid from the Ambassador’s balcony down onto me when I was sleeping next to the embassy foot steps

– The liquid penetrated an umbrella which was covering my face when I was sleeping. pic.twitter.com/IEeF6vUbvu

Sayed Ahmed AlWadaei, advocacy director at the Bahrain Institute for Rights & Democracy (BIRD), said: “This attack sets a new dangerous precedent. If the British police fail to take action and hold the embassy accountable, then activists will not feel safe in the UK. Bahrain will get free pass for its thuggish tactics because it built a British naval base and buys British weapons.”

This attack sets a new dangerous precedent. If the @metpoliceuk fail to take action and hold the embassy accountable, then activists will not feel safe in the UK. Bahrain will get free pass for its thuggish tactics because it built a British naval base and buys British weapons. pic.twitter.com/S5mpPSXzTh

Spokesperson from Met Police Press Bureau said: “Police were alerted at about 02:00hrs on Sunday, 12 August to reports of an assault outside the Bahrain Embassy, Knightsbridge. Officers attended and established a man, aged in his 30s, had what is believed to be water thrown over him. He did not require medical assistance. No arrests have been made. Enquiries continue. “
ENDS
Take Action & Email Your MP to ask that they urgently raise the case of Dr Abduljalil AlSingace