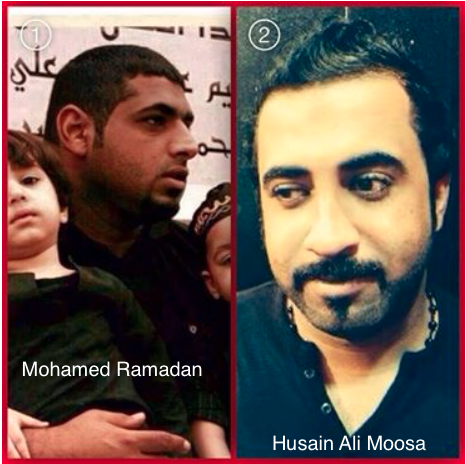 24 October 2018 –  On Monday 22 October 2018, Bahrain’s Court of Cassation overturned the death sentences of political prisoners Mohammed Ramadan and Husain Moosa, and returned their case to the Court of Appeal for retrial.

Ramadan and Moosa had been convicted on 29 December 2014 for the alleged murder of a policeman in a terrorist attack in Al- Dair District.

Commenting, BIRD’s Director of Advocacy, Sayed Ahmed Alwadaei, said: “Mohammed Ramadan and Husain Moosa were subjected to horrific acts of torture, and then a wholly unfair trial. As victims of Bahrain’s failed criminal justice system, they have suffered enough and should be released until their next hearing.”

In March 2018, Attorney General Dr. Ali bin Fadl al-Buainain revealed that he had received a memorandum from the Special Investigation Unit (SIU) on their investigation of the complaints filed by Moosa and Ramadan, in which the SIU requested to review the sentence against them. The SIU lodged their request to the Court of Cassation.

The SIU recommended that the death sentences be reconsidered following their investigation, which found medical reports on Moosa from the Ministry of Interior that were unknown at the time of their trial and verdict.

Following their arrest in 2014, Ramadan and Moosa alleged that police tortured and coerced them to confess to crimes that they did not commit. They pleaded not guilty at trial and reiterated to the court that their confessions were false. The court relied on their confessions regardless, failing to order any investigation into their allegations.

The treatment and trial of Ramadan and Moosa fall short of international standards of fair trial and due process enshrined in conventions such as the the International Covenant on Civil and Political Rights and Convention Against Torture. These violations render the original death sentences unlawful.

Despite pressure from the UN and the international community, the death penalty remains an integral part of the Bahraini legal system. There are currently 14 Bahraini nationals on death row, sentenced in political cases. 14 sentences were issued in 2017, this represents the highest number of death sentences to have been issued in Bahrain since the establishment of regular courts in 1923.