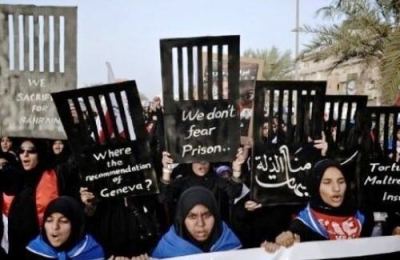 In June 2018, Najah was found guilty for, according to the Public Prosecution, promoting and encouraging people “to overthrow the political and social systems”. The court used prepared confessions signed by Najah after suffering acts of torture and sexual assault at the hands of officers belonging to Bahrain’s National Security Agency. No investigations have been conducted by the Bahraini authorities to examine Najah’s allegations.

In a letter to the Bahrain Institute for Rights and Democracy (BIRD), Formula One stated that they have “raised our concerns with our counterparties in Bahrain as part of our ongoing enquiries”. This is the first time that Formula One have acknowledged its implication in Najah’s case.

BIRD has previously brought the case of Najah to Formula One’s attention on numerous occasions, including in the months leading up to her conviction. BIRD had provided Formula One with the Facebook evidence used by the Public Prosecution against Najah. At the time, however, Formula One decided to distance themselves from Najah’s case, dismissing the evidence. They stated that they had been informed that her charges related “to alleged activities dating back to 2010, which do not relate to any opposition she may have expressed in relation to the 2017 Bahrain Grand Prix”.

However, BIRD obtained Najah’s judgment, in which Formula One’s name is explicitly mentioned in one of the social media posts cited by the court to convict Najah to three years imprisonment.

Commenting, Sayed Ahmed Alwadaei, Director of BIRD, said: “Najah endured horrific acts of torture and sexual assault for criticising her government and the Bahrain Grand Prix 2017 just one week after the event. In the past, Formula One failed to take any measures to prevent Najah’s conviction, despite us sharing the details of her ordeal with the organisation. They ignored us, and only issued a cursory response when their reputation was threatened. Only now has Formula One expressed any concern for Najah, as she languishes in prison, experiencing ongoing ill-treatment at the hands of Isa Town prison authorities.”

“Formula One is in a position of power; failure to act means they are complicit to Najah’s suffering. Formula One must leverage the full weight of their authority to ensure their abusive business partner releases Najah immediately and unconditionally. If that requires cancelling the Bahrain Grand Prix in 2019, then so be it.”

A week after the Bahrain Grand Prix (14-16 April 2017), Najah was violently interrogated about her political views by officers from the NSA at Muharraq Police Station from 23 April 2017. She was interrogated for approximately eight hours a day for five days. During the interrogations, Najah was beaten and sexually assaulted. She was also threatened with rape, and the killing and imprisonment of her sons. On 27 April, Najah was told to sign a pre-prepared confession without reading it, and eventually transferred to the Public Prosecution.

Both the Public Prosecutor and the Court ignored Najah’s repeated attempts to detail her torture and sexual assault.

Speaking about her ordeal, Najah told BIRD: “If I wrote down the violations I was subjected to, it would be a book. They insulted my honour and dignity, they physically assaulted me, removed my headscarf, tried to tear off my clothes, and touched my sexual organs. They threatened me with rape, and threatened to kill or put my sons in prison. All this in the presence of plainclothes officers.”

On 25 June 2018, Najah was sentenced to three years imprisonment and has remained in Isa Town Female Centre ever since. Her verdict was upheld on 29 October 2018.

On 15 March 2018, BIRD wrote to F1 to raise concerns over Najah’s abuses and their relation to criticism against Formula One Grand Prix. BIRD had obtained and shared with F1 the relevant sections of the legal dossier presented by the Public Prosecution, which detailed Najah’s charges for alleged social media activity criticising F1. The Bahraini authorities have cited evidence from a Facebook page which contains posts “promoting and encouraging people to overthrow the political and social systems”.

F1’s response to BIRD on 4 April 2018 ignored the provided evidence and falsely stated that Najah’s pre-trial detention related “to alleged activities dating back to 2010”. The only mention of 2010 in the dossier, however, is in relation to the creation of Najah’s personal Facebook account.

Furthermore, the F1 Group stated that “the appropriate way for Ms. Yousif to pursue any grievance” is by complaining to Bahrain’s Ministry of Interior Ombudsman, which “will investigate the matter independently”. However, the Ombudsman’s lack of independence and transparency has been widely recognised, including by the UN Committee Against Torture.