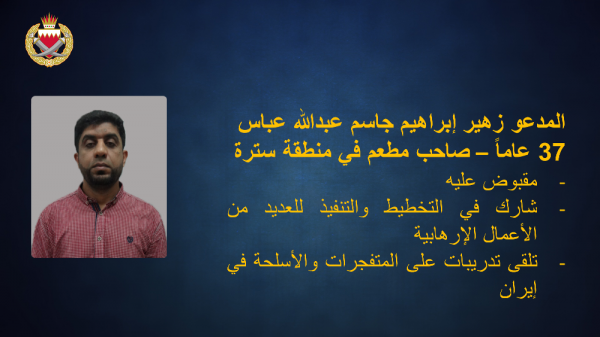 29 November 2018 – Today, Bahrain’s Fourth High Criminal Court sentenced two individuals to death on alleged terrorism-related charges, and sentenced three others to between seven years and life imprisonment, the Public Prosecution announced today. The five individuals were also revoked of their citizenship. One of the individuals sentenced to death, Zuhair Ibrahim, is being held in detention since his arrest in November 2017, when he was subjected to severe torture and enforced disappearance.

This brings the current number of Bahraini nationals on death row sentenced in political cases to 20.

As this deeply unfair trial concludes, the Bahrain Institute for Rights and Democracy (BIRD) condemns the ruling in the strongest possible terms and urges Bahraini authorities to issue a moratorium on executions, pending the abolition of the death penalty once and for all.

Commenting, BIRD’s Director of Advocacy, Sayed Ahmed Alwadaei, said: “This devastating injustice epitomises the brutality of a regime committed to crushing dissent at any cost. Zuhair has been subjected to the most horrific acts of abuse following his arrest, having been tortured, stripped naked, and sexually assaulted by the Bahraini authorities. As if this wasn’t enough, the corrupt judiciary sentenced him to death for a crime confessed to under duress.”

The trial involved 5 individuals in total accused of organising and managing a terrorist group, causing explosions and possession of explosives and weapons, as well as attempting to kill a police officer. The Court sentenced:

The citizenship of all five individuals has been revoked as well. This brings the total number of Bahraini revocation of citizenship cases to 805 since 2012, with an unprecedented 299 cases occurring in 2018 alone.

The Bahrain Centre for Human Rights (BCHR) interviewed the family of Zuhair Ibrahim and documented the severe torture he was subjected to at the Criminal Investigation Directorate (CID) after being arrested on 2 November 2017. He was electrocuted, punched and kicked, hanged from his hand and feet, stripped naked and sexually assaulted, and they threatened his sons and wife with death and being discarded in the sea. Zuhair’s wife was also severely beaten and threatened with rape.  BCHR reported that after 13 days of interrogation at the CID, when “he was on the verge of death”, Zuhair eventually signed a pre-prepared confession.

In total, Zuhair was held at the CID for 55 days and then transferred to the Dry Dock Prison. He was able to see his family after 70 days of detention.

Despite pressure from the UN and the international community, the death penalty remains an integral part of the Bahraini legal system. There are currently 20 Bahraini nationals on death row, all sentenced in political cases.

In January 2017, three torture victims, Abbas AlSameea, Sami Mushaima and Ali Alsingace, were executed six days after the Court of Cassation upheld their death sentence. This is widely considered to be the first execution related to political unrest in Bahrain since 1996.

Records of Citizenship Revocation per Year

According to BIRD’s documentation, there have been 805 cases in which the citizenship of a Bahraini national has been revoked by the government since 2012.