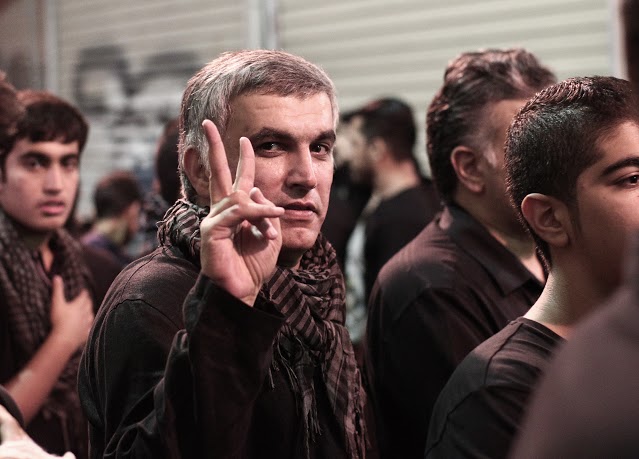 31 December 2018 – Today, Bahrain’s Court of Cassation upheld the five-year sentence issued against leading human rights defender, Nabeel Rajab, for his critical comments on social media. Rajab has now exhausted all legal remedies. The Bahrain Institute for Rights and Democracy (BIRD) condemns today’s decision in the strongest term and urges the Bahraini authorities to ensure his immediate and unconditional release.

Rajab tweeted and retweeted his condemnation of airstrikes in Yemen mounted by the Saudi-led coalition and exposed the widespread torture occuring in Bahrain’s notorious Jau Prison.

Rajab was originally sentenced to five years in prison on 21 February 2018. Although he appealed the verdict, a court upheld his sentence on 5 June 2018. Since his arrest in June 2016, Rajab was convicted to seven years imprisonment as a result of two separate trials, both of which violate Rajab’s right to free and peaceful expression.

Rajab has other pending charges against him, including one for writing an article which was published in the New York Times while serving his imprisonment. Nabeel is expected to be released in 2023, provided that these pending charges are not pursued in court.

Commenting, the Director of Advocacy at BIRD, Sayed Ahmed Alwadaei, said: “The decision to uphold Nabeel’s conviction illustrates that Bahrain’s corrupt judicial system sought to continue his political persecution. By arranging the final verdict to fall during the holidays, a time when international attention will be minimal, the intentions of Bahrain’s rulers have been made clear. This appears to be a planned outcome, prepared well in advance.

Despite this verdict, history will remember Nabeel as a hero who took a stand for peace while his country bombed the children of Yemen.”

The social media activity held against Rajab occurred entirely in 2015. On 2 April 2015, Rajab was arrested and charged with the following:

He was released three months later on 13 July 2015 on humanitarian grounds, therefore his charges were never taken to court.

Rajab was again arrested on 13 June 2016 for an unrelated charge, for which he was eventually sentenced to two years in prison in July 2017 for speaking to journalists.

While in detention, Rajab’s trial for his social media activity commenced with its first hearing on 12 July 2016. The trial was postponed 20 times, with a decision being made in the 21st court hearing on 21 February 2018.

BIRD has obtained Rajab’s Public Prosecution documentation, which represents a dossier of all the incriminating tweets for which Rajab is being held accountable.

Rajab’s exposure of the widespread torture inflicted upon inmates in Bahraini prisons occasionally involved criticism of Bahraini oversight institutions, including the National Institute for Human Rights and the Ministry of Interior Ombudsman, both recipients of training funded by the UK. The Public Prosecution documentation further revealed that Rajab’s conviction to five years was also based on re-tweets of critical comments made by others, including the scathing reporting of torture in Jau Prison by Human Rights Watch .

Tweets on the humanitarian crisis in Yemen were also considered offensive including: “We have the right to say no to the war in #Yemen and should struggle for peace and stability but not bloodshed #Sanaa.”

Rajab’s case violates international legal standards on fair trial and due process as his conviction constitutes a blatant violation of freedom of expression.

Despite the international outcry caused by Rajab’s five-year sentencing, the FCO failed to condemn the ruling and call for his release. Instead, Minister of State for the Middle East Alistair Burt merely expressed concerns in a statement issued on 21 February 2018.