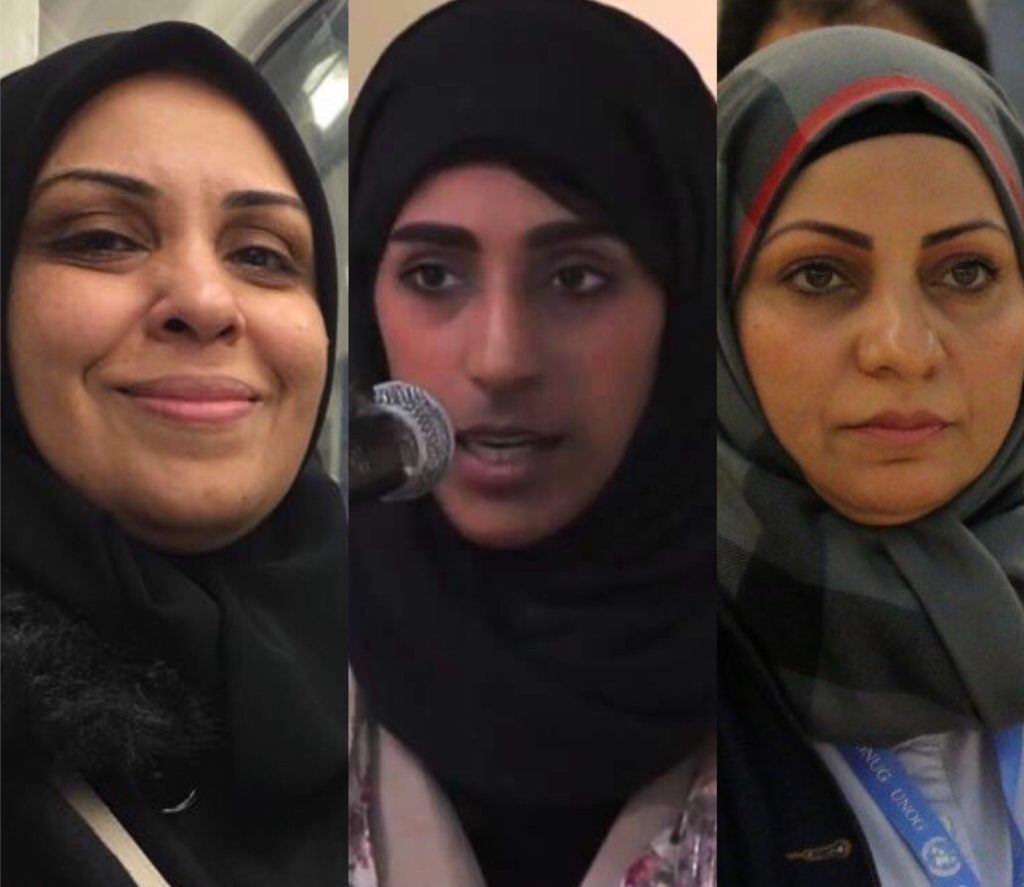 19 March 2019 – Six UN experts have expressed “serious concerns” for three Bahraini human rights defenders who have been routinely targeted by the Bahraini Government for their human rights activism, including their engagement with UN mechanisms. The experts reiterated their concerns for the criminalisation of freedom of expression in Bahrain and urged the authorities to investigate the allegations of abuse against the women.

Hajer Mansoor Hassan, Ebtisam AlSaegh and Zainab AlKhamis have been imposed “travel restrictions, politically motivated charges, threats, including death threats and threats of sexual violence, and physical violence” as part of a broader campaign aimed to “prevent human rights defenders from carrying out their peaceful and legitimate work”, the experts said.

The Government responded by including an “explanatory note…by the competent authority in the Kingdom of Bahrain”, namely the Ministry of Interior Ombudsman, a body which has been the subject of heavy criticism for its lack of independence, including by the UN Committee Against Torture. They denied all allegations of abuse.

Commenting on the letter, BIRD’s Director of Advocacy, Sayed Ahmed Alwadaei, said: “This exposure by the UN highlights the alarming trend to escalate measures to intimidate women human rights defenders in Bahrain. The situation of female activists in custody has been worsening dramatically. Hajer has not seen our family for the past six months and is routinely targeted and abused by the head of the prison, Lieutenant Colonel Albardoli”.

Hajer is the mother-in-law of BIRD’s Director of Advocacy, Sayed Ahmed Alwadaei, and has been repeatedly subjected to ill-treatment and unjustified restrictions while in prison. She was unlawfully sentenced to three years in prison based on fabricated charges in October 2017, according to the UN Working Group on Arbitrary Detention.

Hajer was assaulted by prison authorities in September 2018, after her case was raised in the 2018 report of the UN Secretary-General and denied access to adequate medical treatment “in conformity to international human rights law”. In March 2018, Hajer launched a hunger strike to protest her poor treatment. Officers told her that they were instructed by senior prison officials to “make her life difficult” and threatened to punish her further if she exposed the treatment political prisoners receive in Isa Town Prison. The experts identified Mariam Albardoli, the head of the prison, as responsible for these abuses.

They urged the Bahraini government to indicate the measures taken “to ensure adequate treatment of Ms. Hajar Mansoor Hasan while in detention…” as well as “to investigate abuses” perpetrated against her.

Hajer has not seen her family since the assault in September 2018.

Ebtisam is a prominent human rights defender. Her case was repeatedly reported by the UN experts, including a report by the Secretary-General as an act of reprisals for cooperating with the UN.

Ebtisam was released in October 2017 after spending four months in custody, wherein she was subjected to sexual and physical abuse. The experts expressed concern that her charges have not been formally dropped and that, therefore, she remains at risk of being rearrested.

The experts highlighted that Ebtisam continues to be subjected to travel restrictions to prevent her participation in the Human Rights Council. During the session in June-July 2018, Ebtisam was threatened with rape and defamation on Twitter and Instagram from two accounts, one of which appears to belong to a well-known Bahraini security officer. This came after she expressed human rights concerns on social media.

The six UN experts urged the Bahraini Government to outline any investigation into her travel bans and the messages received including “death threats and threats of sexual violence”.

Zainab is a human rights defender and a member of the Bahrain Human Rights Society. She was targeted after participating in a peaceful sit-in protest in front of the UN building in Manama in 2015. Zainab was summoned and interrogated multiple times and asked about her activism and family links. Officials also stopped Zainab at Bahrain International Airport and subjected her to travel bans and strip searches.

The experts called on the Bahraini Government to “provide detailed information on the decision to enforce travel restrictions on …Ms. Zainab Khamis.”