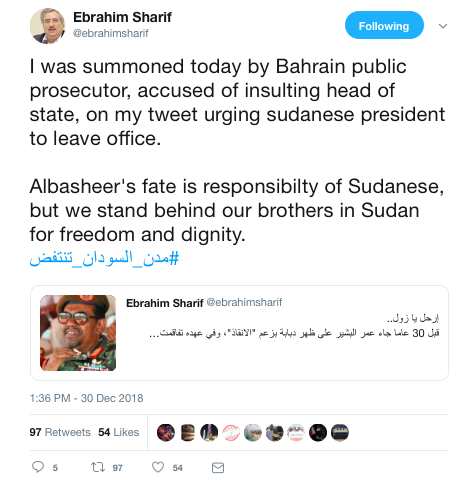 13 March 2019 – Today, Bahrain’s Lower Criminal Court sentenced former opposition leader Ebrahim Sharif to six-month imprisonment and a 500 BD fine to suspend the execution of the sentence,  for tweeting criticism of Sudan’s president Omar Albashir. Since December 2018, Sudan has been rocked by popular protests against the 30-year dictatorship of President Albashir.

Ebrahim Sharif is the former leader of the secular opposition party Wa’ad, which was dissolved earlier this year in the crackdown against civil society in the kingdom.  Ebrahim has spent time in Bahrain’s notorious Jau Prison for his role in the pro-democracy protests in 2011.

The Bahrain Institute for Rights and Democracy (BIRD) strongly condemns the sentencing and calls on the Bahraini authorities to drop all charges against Ebrahim.

The tweets in question were posted on 25 December 2018 under the hashtag “Cities of Sudan rise up.”  Ebrahim called for an end to tyranny and freedom for the Sudanese people. He also condemned the regime for intensifying the civil war and worsening the condition of the poor.

Tweeting on 30 December 2018, Ebrahim stated “I was summoned today by Bahrain public prosecutor, accused of insulting head of state, on my tweet urging Sudanese president to leave office. Albasheer’s fate is responsibilty of Sudanese, but we stand behind our brothers in Sudan for freedom and dignity.”

I was summoned today by Bahrain public prosecutor, accused of insulting head of state, on my tweet urging sudanese president to leave office.

Albasheer's fate is responsibilty of Sudanese, but we stand behind our brothers in Sudan for freedom and dignity.#مدن_السودان_تنتفض https://t.co/38AV5tqfnb

Sayed Ahmed Alwadaei, Director of Advocacy at the Bahrain Institute of Rights of Democracy, commented: “Today’s judgement is a slap in the face to freedom of expression and demonstrates the paranoia of the ruling family about the exposure of the human rights abuses of their fellow Arab dictators.”

In 2009 became the first sitting president to be indicted by the International Criminal Court (ICC), for directing a coordinated campaign of rape, murder and pillage against civilians in Darfur.