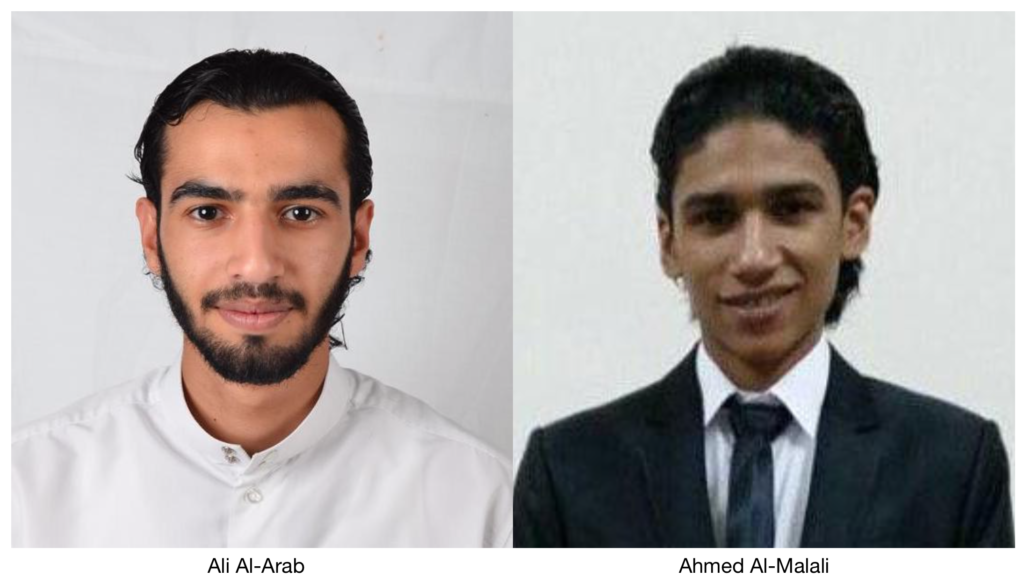 23 May 2019 – Today, 16 cross-party MPs and Lords wrote an open letter to Foreign Secretary Jeremy Hunt, asking him to urge the King of Bahrain to halt the imminent execution of Ali AlArab and Ahmed AlMalali, whose death sentences were upheld last week by Bahrain’s highest court.  On Tuesday, 5 UN experts joined appeals for Bahrain to quash the sentences of both men, citing “serious concerns that they were coerced into making confessions through torture and did not receive a fair trial.”

Since the start of the holy month of Ramadan on 5 May, Bahrain has upheld the death sentences for eleven men, including nine for political offences and two for drug-related crimes.  Among these men was Hussain Abdullah Marhoon Rashid, who has also exhausted all legal remedies.

Executions resumed in Bahrain in 2017 following a seven year moratorium.  Three men were executed by firing squad, in what the UN condemned as “extrajudicial killings”.  There are currently twenty-one Bahrainis sentenced to death, including nine at risk of imminent execution, having exhausted legal remedies. All are held in the notorious Jau Prison, which rights groups have complained routinely fails to provide the standard of care for prisoners demanded by the UN Mandela Rules.

In April, the head of Jau Prison, Brigadier Abdulsalam al-Arifi, visited HMP Berwyn in Wrexham and HMP Whitemoor in Cambridgeshire, as part of Bahrain’s efforts to develop rehabilitation programmes.  The British government, who maintain a close strategic relationship with the small Gulf island, has invested in reform efforts in Bahrain to the tune of £6.5 million.

Sayed Ahmed Alwadaei, Director of Advocacy at BIRD commented “This is a landmark call by cross-party MPs for the government to put their money where their mouth is regarding the death penalty.  This should sound an alarm bell for the Foreign Secretary, reminding him that it is within his power to save the lives of two young torture survivors who have suffered grossly unfair trials.  The British taxpayer has a multi-million pound investment in judicial reform in Bahrain; if this is not enough to protect that country’s most vulnerable citizens then questions must be asked about the efficacy of Britain’s financial support for Bahrain.”

We are writing to express our gravest concerns to the Foreign and Commonwealth Office (FCO) regarding the decision of Bahrain’s highest court to uphold the death sentences of Mr Ali AlArab and Mr Ahmed AlMalali on 6 May 2019, amid credible allegations of torture and due process violations. Their sentences will now pass to the king for final ratification, placing these men at risk of imminent execution.

Last month, a Twitter account linked to Bahrain’s intelligence services stated, prior to the announcement of the hearing, that Bahrain’s Court of Cassation would uphold the sentences against the pair and that their sentences would be immediately referred to the king for ratification. That same account provided information about the three men who were executed in January 2017, one day before their executions were carried out. Furthermore, it is likely that the executions will take place, as their charges include killing a security force officer from a prominent Sunni family. Therefore, the urgency of these cases cannot be overstated.

Mr AlArab and Mr AlMalali were arrested separately on 9 February 2017 by officers who failed to produce arrest warrants. Both men were held in custody for a month, during which time they were refused access to legal representation. According to the UN Special Procedures, Mr AlArab was coerced into signing a confession while blindfolded, after being subjected to torture including electric shocks, the removal of toenails and severe beatings.

Mr Malali was shot multiple times during his arrest, breaking bones in his hand and leg.  Doctors did not remove these bullets for 23 days, during which he was allegedly tortured at Bahrain’s Criminal Investigations Directorate in order to coerce a confession, which he was not permitted to read before signing. Despite being brought to the court from prison, both men were prevented from attending proceedings and were sentenced to death in absentia during a mass trial of 60 defendants on 31 January 2018. They were also stripped of their citizenship, but these were reinstated by order of the king on 27 April 2019.

The UN is “extremely concerned” that their convictions depended on confessions which were “obtained under torture and used as evidence in court” and that their trials failed to meet “international standards of fair trial and due process.” The life of two young men now rests on the signature of King Hamad. The United Kingdom has long opposed capital sentences in all circumstances and countries and we urge you to demonstrate this historic commitment by making immediate representations to the King of Bahrain urging him to quash the unlawful sentences against Mr AlArab and Mr AlMalali, order a retrial, and investigate the torture allegations before it is too late.