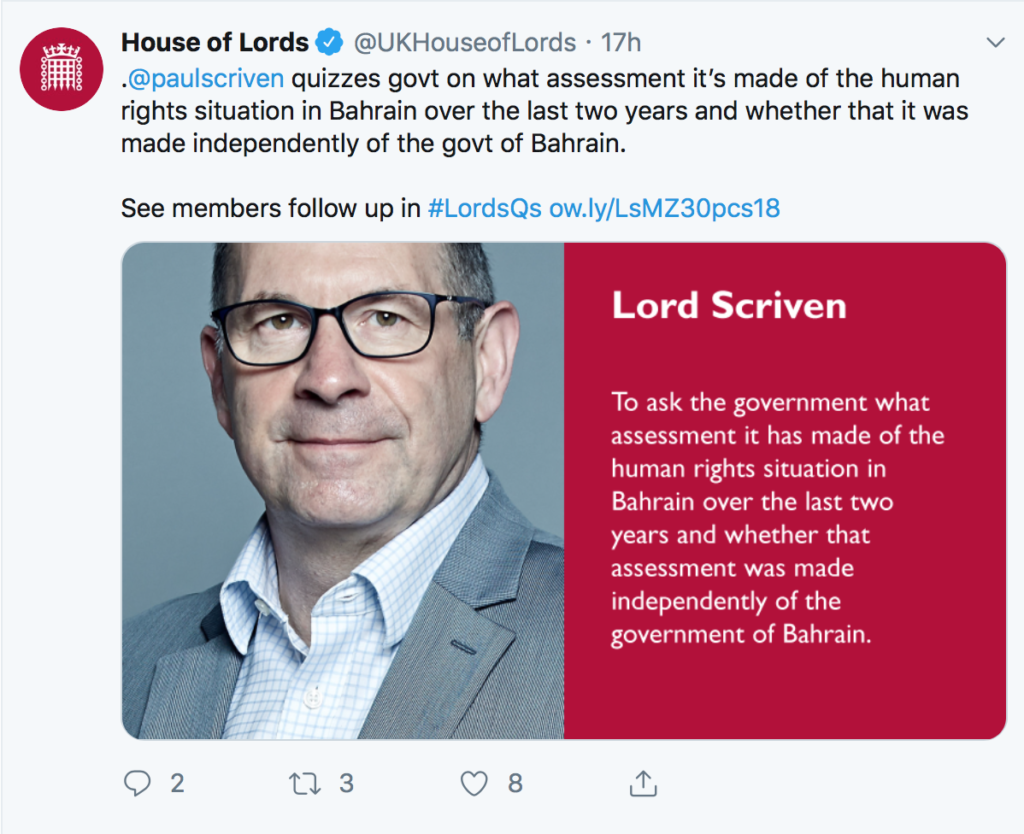 25 July 2019 – Yesterday, at the House of Lords’ afternoon session, Liberal Democrat Peer Lord Scriven asked about the government’s assessment of the human rights situation in Bahrain. Lords from the Conservative, Labour and Liberal Democrat parties as well as a Crossbencher, participated in the proceeding discussion on human rights in Bahrain. The government’s position proved disappointing as they continue to rely on the Bahraini state’s assurances with regards to human rights violations, as well as referring to internationally discredited oversight bodies.

Lord Scriven relayed the accounts of torture and sexual assault of Bahraini human rights defender, Ebtisam AlSaegh and activist Najah Yusuf. Lord Scriven emphasised that in 2015, £16,000 of taxpayers’ money went into the training of the head of Muharraq Security Complex where these two women were abused in 2017. He went on to ask the House: “On what basis is the UK continuing to spend taxpayer’s money to train Bahraini officials who are implicated in human rights violations?”. In response, Lord Ahmad of Wimbledon, FCO Minister of State, stated that, “all training […] is in line with international standards […]” and neglected to address the complicit role of UK-funded training schemes that Lord Scriven had highlighted.

On what basis is the UK continuing to spend taxpayers’ money to train Bahraini officials who are implicated in human rights violations?

A subsequent interjection from Lord Collins of Highbury, Labour Peer and Shadow Spokesperson for Foreign and Commonwealth Affairs, criticised the Minister’s response as “not adequate” and invoked the UN Committee Against Torture’s verdict which declared that UK-funded oversight bodies in Bahrain are “not independent” and “not effective”. In light of this, the Peer urged the FCO to explain what actions they are taking to properly assess oversight bodies. The Minister replied that although “serious concerns remain”, he considers engagement and support, “particularly training”, to be a way forward.

Conservative Peer Lord Lamont of Lerwick raised concerns about discrimination faced by the Shia population in the country, while Baroness Stern called on the new UK ambassador to Bahrain, Roderick Drummond, to actively support human rights defenders and raise their cases with the Bahraini government.

At the close of the exchange, the FCO denied that the family members of BIRD’s Director, Sayed Ahmed Alwadaei are imprisoned as a reprisal against his human rights activism, based solely on the Bahraini government’s assurances. This is in flagrant disregard of the international community which has repeatedly expressed grave concerns at the reprisals exacted on the Alwadaei family, including the UN Working Group on Arbitrary Detention’s decision which declared their imprisonment to be “arbitrary”, “unlawful” and “acts of reprisal”.

It’s shame the FCO continue to accept Bahrain’s lies on the unlawful imprisonment of my family members. https://t.co/UbR6SdeZRy pic.twitter.com/HUvEpTGoDY

The UK government’s repeated refusal to acknowledge human rights violations perpetrated by the Bahraini authorities is devoid of legitimacy. The UK government must review its position on Bahrain, and utilise its allyship in order to publicly denounce the abuses committed by its partner and call on them to respect binding legal obligations and international standards.