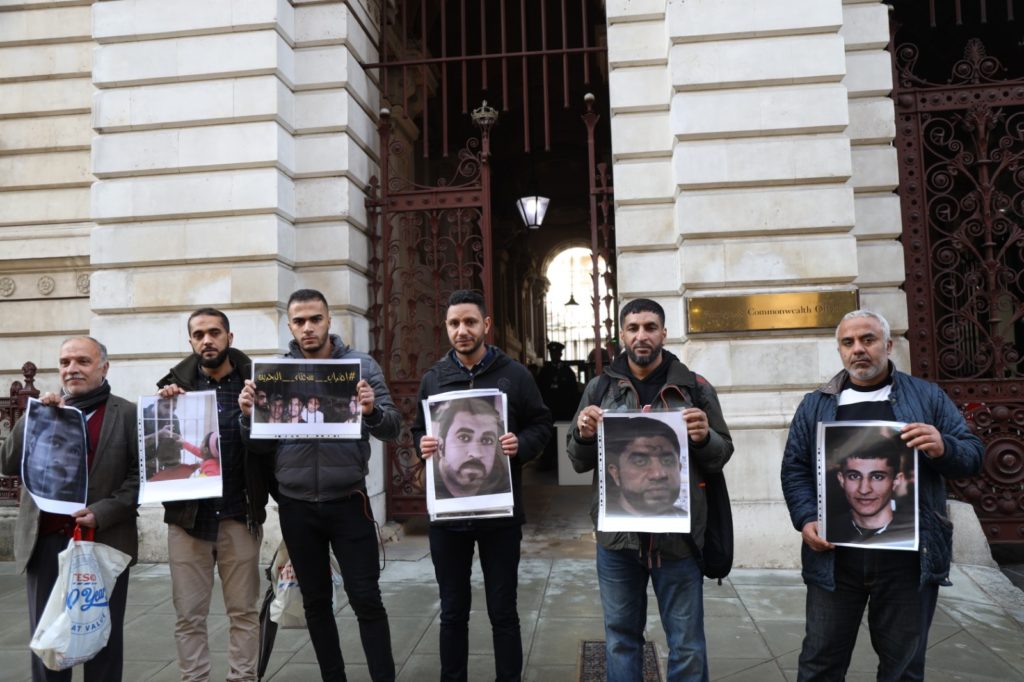 17 October 2019 – At least 26 Bahraini prisoners have joined a hunger strike to protest against the obstruction of family visits at Bahrain’s Jau Prison. The strike was launched on 10 October by seven death row inmates and has now spread beyond death row.  Demonstrations in solidarity with the strikers are also expected in London today, when a delegation led by Bahrain’s Foreign Minister will meet with Andrew Murrison, the UK’s Minister of State for the Middle East.

The protesters are demanding the removal of a glass barrier that has been imposed during family visits since February 2017, preventing any physical contact between inmates and their families.  Prisoners view the barrier as a collective punishment following the escape of several inmates two years ago. The strikers stressed that the strike is a last resort, as prison authorities have repeatedly ignored requests to address their complaints.

Prominent death row inmates including torture victim Mohammad Ramadan have joined the strike and those on death row are reportedly only accepting water.  Mr. Ramadan told his family that he was taken to the prison clinic after collapsing on the sixth day of the strike.  His blood sugar level dropped to 3.5mg and he described suffering from dizziness, pain in his chest and joints and difficulty speaking.

Bahrain’s National Institute for Human Rights has asserted that the prisoners’ demands “do not comply with the administrative procedures” in force at the prison and that all striking inmates “were presented to the prison clinic to follow up their health status.”  Inmates report that prison authorities refuse to treat them unless they sign an agreement to end their strike.  Human rights watchdogs, including the UN Committee Against Torture, have frequently questioned the independence of Bahrain’s oversight bodies, including the National Institute for Human Rights.

Chris Law, Chair of the APPG on Human Rights and Democracy in the Gulf, and Lord Scriven, Vice Chair of the APPG, sent a letter to the FCO MENA Minister Andrew Murrison today urging for human rights to be kept as the top priority in the meeting.

As the @foreignoffice hosts #Bahrain’s FM today, human rights must be at the core of their discussion. Death row inmates are currently on #HungerStrike to demand unobstructed family visitation. @ChrisLawSNP & I wrote to @AWMurrison to demand that they are treated humanely. pic.twitter.com/llpIRF1BsY

A wave of hunger strikes has rocked prisons across Bahrain since mid-August, when more than 600 prisoners at Jau Prison and Dry Dock Detention Centre refused food.  The denial of religious rights, obstruction of family visits and denial of medical care are among their complaints.  Last week, Human Rights Watch and BIRD revealed that at least six high-profile opposition figures were being denied specialist medical care by authorities at Jau Prison.  Denial of adequate medical care was also among the abuses – including sexual assault and torture – exposed in a recentreport by BIRD and ADHRB at Isa Town Female Detention Centre.

Bahrain now incarcerates its population at a rate higher than any other Arab nation.  The number of inmates facing the death penalty has skyrocketed since executions resumed in 2017, ending a seven-year moratorium.  In July, Bahrain sparked an international outcry by executing two torture victims, in what the UN Special Rapporteur on extrajudicial executions described as “arbitrary killings.”  There are at least 16 individuals on death row in Bahrain, including eight at risk of imminent execution, having exhausted all legal remedies.

Sayed Ahmed Alwadaei, Director of Advocacy at BIRD, commented “Conditions in Bahrain’s prisons are truly appalling.  It is frightening to think that some of these inmates may not even be allowed to properly say goodbye to their families before they are executed.  They are now putting their health at risk for the humane request to be able to hold their children during family visits.  These vindictive policies are the latest example of the Bahraini government’s callous disregard for the wellbeing of prisoners across Bahraini prisons.

Maya Foa, Director of Reprieve, commented: “These reports are especially disturbing in light of the British Government’s continued security assistance to Bahrain. The Bahraini ‘justice’ system is characterised by torture, forced confessions and arbitrary executions, yet UK authorities continue to support the system and downplay the gravity of the abuses. Britain should make assistance to the Bahraini justice and security sector conditional on real and meaningful reforms.”