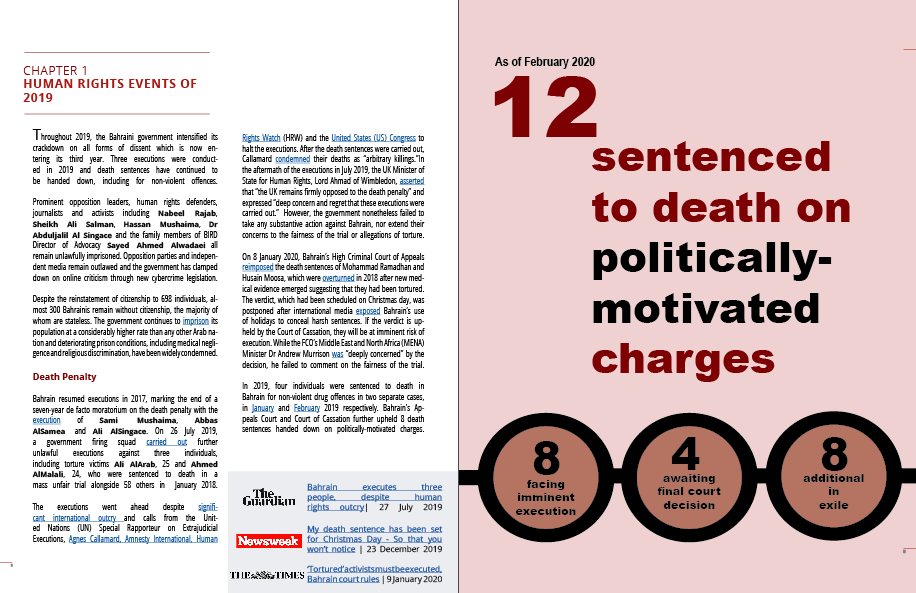 20 February 2020 –  Today, The Bahrain Institute for Rights and Democracy (BIRD) launched its 2020 Annual Report to mark the ninth anniversary of the Bahraini Uprising.  BIRD’s inaugural annual report gives a comprehensive oversight of the human rights developments in Bahrain during 2019, concluding that the human rights situation has “continued to deteriorate”.

The report points to the Bahrain’s government’s violent crackdown on its citizens as evidence of an unrelenting campaign against all forms of dissent. All opposition parties and independent media remain dissolved, while protests continue to be brutally crushed, critical voices targeted and online criticism policed through obtrusive cybercrime legislation.  Over 300 people were convicted in mass trials during 2019, while the judiciary continued to rely on confessions rather than physical evidence, encouraging the persistence of torture in Bahraini detention centres.

The report also sheds light on the deterioration of prison conditions in Bahrain throughout 2019, with inmates describing a range of abuses including religious discrimination, torture and unsanitary conditions, amongst other issues.  These issues compelled over 600 prisoners to launch a hunger strike in August 2019 to demand their basic rights be respected.

Bahrain was also widely condemned for its consistently failing to provide inmates with an  adequate standard of medical care, with Joe Stork from Human Rights Watch describing the practice as “outrageous”. Aging opposition leaders including Hassan Mushaima and academic Dr Abdujalil al-Singace complain that they are systematically subjected to medical negligence due to their political status. Similarly, Hajer Mansoor, who remains arbitrarily detained in reprisal for the activism of her son-in-law, BIRD Director of Advocacy Sayed Ahmed Alwadaei, has regularly reported medical negligence at Isa Town Female Detention Centre, alongside targeted discrimination by prison authorities.

BIRD found that the government of the United Kingdom has consistently failed to acknowledge or act upon international warnings about human rights violations in Bahrain, while maintaining technical and financial support to institutions known to be ineffective or abusive.  Funding for the UK government’s so-called “technical assistance” to Bahrain continues to be channeled through the highly secretive Integrated Activity Fund, precluding adequate scrutiny of Britain’s relationship with Bahrain.

The report also highlights a number of government scandals, including the $5 billion Petrofac lobbying scandal, the storming of the Bahraini embassy in London by police in mid-summer and the ongoing torture debacles at the University of Huddersfield.  In a unique move, the report tracks official and unofficial visits by British ministers, diplomats and members of the armed forces to their Bahraini counterparts, to illustrate the intimate links between powerful British institutions and Bahrain’s ruling elite.

Throughout 2019, BIRD’s campaigning and advocacy focused heavily on exposing Bahrain’s attempts to normalise its position in the global economy through investment in sporting and cultural events.  A chapter in the report tracks the tangled web of economic interests tying Bahrain’s ruling elites to a wide portfolio of sporting ventures, including motorsport, athletics, cycling and combat sports, which have proven to be both effective PR and highly lucrative.

As “sportswashing” has become increasingly central to Bahrain’s international relations strategy, the government has aggressively targeted any of its citizens who undermines the image of prosperity and normalcy that they have tried to project.  In 2019, BIRD successfully exposed Bahrain’s targeting of those who criticise the government’s cynical exploitation of professional sport, with significant campaigns contributing to the release of refugee footballer Hakeem AlAraibi and activist Najah Yusuf and professional footballer Hakeem AlAraibi.

Sayed Ahmed Alwadaei, Director of Advocacy at The Bahrain Institute for Rights and Democracy (BIRD) commented: “The situation in Bahrain continued to deteriorate in 2019 and sadly there is little sign that it will improve as we enter a new decade.  Bahrain’s regime has been emboldened by the apparently unconditional support of their British allies and as we enter the post-Brexit era, the UK’s propensity to put trade above human rights seems likely to increase.”