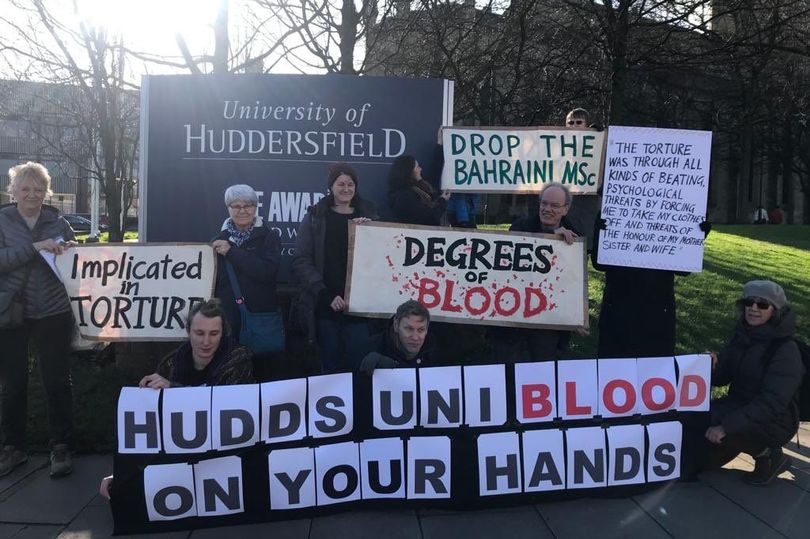 9th October 2020 – Today, a letter signed by 42 leading academics from over 22 universities around the world and members of the British Society for Middle East Studies (BRISMES) was published by The Yorkshire Post, calling on the University of Huddersfield to suspend their exclusive MSc in Security Science for students at Bahrain’s Royal Police Academy (RAP) following revelations that it has acted as a notorious “torture hub”.  The letter was supported by a number of prominent experts on the Middle East, including Prof. Ilan Pappé and Prof. Gilbert Achcar.

The letter draws attention to allegations exposed by The Times and the Yorkshire Post in February that between 2017 and 2019 at least ten political prisoners reported being subject to abuses including beatings, electric shocks and sexual assault at the RAP, which is adjacent to Bahrain’s infamous Jau Prison.

The letter challenged the university on their claim that their MSc course was “in line” with the British government’s objectives in Bahrain, emphasising the University of Huddersfield’s obligation under the UN Guiding Principles on Business and Human Rights to ensure their activities in Bahrain do not contribute to human rights violations. The letter also appealed to the university’s moral responsibility to promote values of freedom of conscience and expression.

I was very happy to support this. While the delivery of the course may be in line with the Government objectives to help reform policing in Bahrain, it counters its commitment to ensure that its overseas aid and assistance does not cause or contribute to human rights abuses. https://t.co/lsFZUkNtJz

While the university has consistently refused to discuss dropping the course, more and more individuals have come forward to testify to being tortured on the premises, including UK-based asylum seekers, death row inmates and family members of BIRD’s Director of Advocacy, Sayed Ahmed Alwadaei.

In July, Huddersfield student and Bahraini refugee Ahmed Al Qassab, who fled Bahrain in 2016 after being tortured and jailed for joining pro-democracy protests, joined calls for his university to end their association with Bahrain. Academics also urged students to “raise the matter with their student’s union” should the university fail to act.

The British Society for Middle Eastern Studies (BRISMES) commented: “The British Society for Middle Eastern Studies (BRISMES) wishes to express grave concerns about the complicity of the University of Huddersfield (UoH) with human rights abuses in Bahrain. The UoH offers an MSc in Security Science which trains police officers in Bahrain’s Royal Academy of Policing (RAP), and brings the university into a collaborative relationship with Bahrain’s Ministry of Interior. However, the RAP and the Ministry of Interior has been the subject of a considerable number of allegations of torture and abuse. These allegations have only multiplied since the Bahraini regime ruthlessly suppressed the mass uprising of 2011. BRISMES is committed to research, teaching and education in our field which raises critical awareness, supports justice for the people of the Middle East, and ends complicity with repressive regimes and institutions. We would therefore like to add our voice to those who oppose this MSc in Security Science, and call upon the University of Huddersfield to withdraw from what is clearly an untenable and highly-compromising collaboration with the security services in Bahrain”

Husain Abdulla, Executive Director of Americans for Democracy and Human Rights in Bahrain (ADHRB), commented “Regardless of the government’s objectives in Bahrain, this is not a matter of business but a matter of human rights. That the university has still failed to distance itself from an institution deeply implicated in the torture of political prisoners is deeply concerning and speaks volumes about the priorities of the current university administration.”

Sayed Ahmed Alwadaei, Director at the Bahrain Institute for Rights & Democracy (BIRD), commented: “Despite receiving ample evidence, the university management remains totally unwilling to discuss their relationship with one of the world’s most abusive police forces. This letter should remind them that profiting from an organisation that tortures political dissidents undermines the academic integrity of their institution.”

Read the full letter below

We are writing to condemn the University of Huddersfield’s (UoH) decision to maintain an exclusive MSc in Security Science for students at Bahrain’s Royal Academy of Policing (RAP) following revelations in The Times and The Yorkshire Post that at least ten political prisoners report being tortured at the site.

Since their publication, more individuals have come forward testifying to being tortured on Academy premises, including UK-based asylum seekers, death row inmates and family members of prominent Bahraini activist Sayed Ahmed Alwadaei. It has also emerged that Ali al-Arab, who was unlawfully executed last summer, was tortured at the RAP.

The widespread use of torture in Bahrain is well documented and almost a decade of training from the UK government has failed to reduce its prevalence. Regardless of the British government’s policy to Bahrain, the UoH has failed in its obligations under the UN Guiding Principles on Business and Human Rights to conduct due diligence to ensure their business practices do not infringe upon human rights or contribute to their violation.

As bastions of freedom of conscience and expression, all universities have a moral responsibility to defend and promote these values. We understand training an institution deeply involved in the suppression of dissidents in Bahrain to be inconsistent with this duty.

We therefore join human rights groups in urging the UoH to suspend their MSc to the RAP, pending an independent investigation. Should the management fail to act, we encourage Huddersfield students to raise the matter with their Student’s Union.