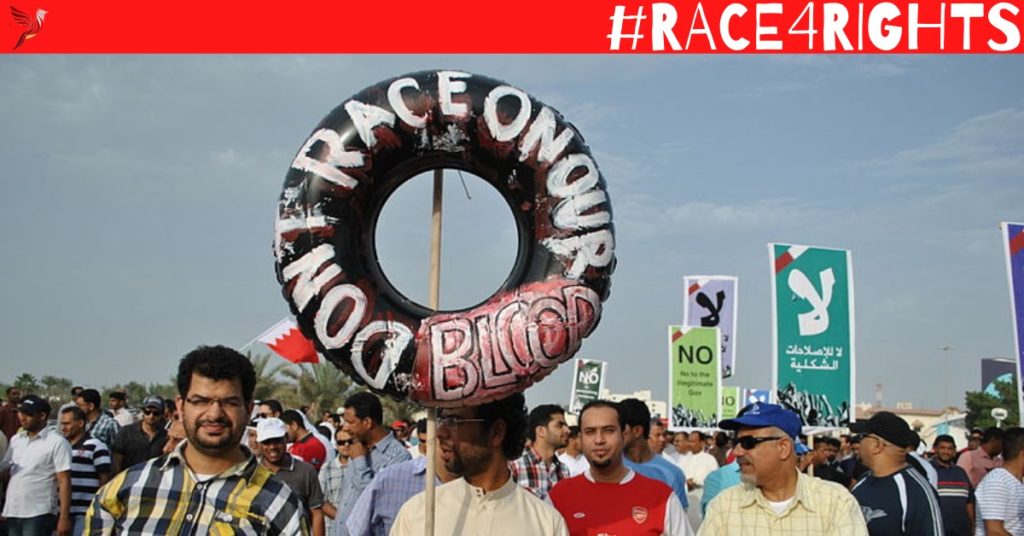 25 November 2020 – 30 cross-party UK parliamentarians have written to the CEO of Formula One (F1), Chase Carey, calling on F1 to leverage Bahrain into respecting the human rights of its citizens ahead of races in the country this weekend. The call to action, made in the run up to F1’s Bahrain Grand Prix and Rolex Sakhir Grand Prix, represents a major parliamentary intervention amidst mounting international pressure on F1 to clean up its stained human rights record, the Bahrain Institute for Rights and Democracy (BIRD) stated today.

The letter was signed by parliamentarians who united across seven political parties, the House of Commons and the House of Lords, to call on F1 “to use maximum leverage to compel Bahrain to: end suppression of protests against the race, secure redress for victims and ensure the rights of Bahraini citizens are defended”. The letter also urges F1 to implement its human rights policy which was adopted in 2015 following an OECD complaint by Americans for Democracy and Human Rights in Bahrain (ADHRB).

Senior politicians including the leader of the Liberal Democrats, Sir Ed Davey; former Green party leader, Caroline Lucas and the Conservative ‘Father of the House of Commons’, Sir Peter Bottomley, all signed the letter and expressed “concern that the Bahrain Grand Prix is exploited by Bahrain’s government to ‘sportswash’ their human rights record”. Layla Moran MP, Liberal Democrat Foreign Affairs Spokesperson, sent the letter on behalf of all signatories. She said: “It’s deeply disappointing that we haven’t seen more progress from F1 when it comes to sports washing and Bahrain’s human rights record […] We can’t let human rights ever be a secondary consideration”.

The timely intervention follows years of campaigning by human rights organisations and civil society actors who have repeatedly documented and denounced ongoing violations associated with F1’s activities in Bahrain. MPs and Peers raised the torture and arbitrary imprisonment of prominent female Bahraini activist, Najah Yusuf, for her peaceful online activism against the 2017 Bahrain Grand Prix, as well as her 17 year old son Kameel whom the letter notes has “been jailed in what Amnesty term a “reprisal against his mother””.

Layla Moran MP, Liberal Democrat Spokesperson for Foreign Affairs and International Development, said: “It’s deeply disappointing that we haven’t seen more progress from F1 when it comes to sports washing and Bahrain’s human rights record. They must care for Bahrainis negatively impacted by the Grand Prix as much as they do for participants.

We can’t let human rights ever be a secondary consideration.

That’s why we’re calling on Formula 1 to use its leverage to compel Bahrain to end the suppression of protests against the race, secure redress for victims and ensure the rights of Bahraini citizens are defended.”

Sayed Ahmed Alwadaei, Director of the Bahrain Institute for Rights and Democracy (BIRD), commented: “MPs have made a landmark call for Formula One to put people above profit and rights above racing. Parliamentarians have amplified messages that human rights organisations have been spearheading for years: that F1 should not be used as a PR tool for countries where dissidents are thrown in prison and tortured.”

Brendan O’Hara MP, SNP Spokesperson for International Human Rights and Conflict Resolution, said: “Whilst Bahrain cracks down on its citizens this month, sentencing 51 people in a mass trial marred by torture-tainted confessions and rounding up peaceful critics as young as 14 years old for detention, F1 are increasing their presence in the country. F1’s silence in the face of rights abuses in Bahrain can no longer be tolerated and we are calling on them to act.”

Caroline Lucas, Green Party MP for Brighton, Pavillion, commented: “When F1’s most successful driver is speaking out about human rights, it is shameful that F1 is continuing to allow its Bahraini partners to sportswash their abysmal human rights record. It is people like Salah Abbas, Najah Yusuf and her son Kameel who are paying the price for this. I hope this letter helps to spotlight the need for F1 to urgently intervene on their behalf ahead of this week’s races in Bahrain.”

Andy Slaughter, Labour Party MP for Hammersmith, commented: “At a time when many sportsmen and women are speaking up more clearly on human rights issues and addressing the concerns of their fans, the long silence of Formula One on the appalling human rights record of countries like Bahrain, which host lucrative races and sportswash their reputation while clamping down on their own citizens for the race period, becomes more noticeable and less defensible.”

In light of news that two Formula 1 races will take place in Bahrain this winter, we write to express concern that the Bahrain Grand Prix is exploited by Bahrain’s government to ‘sportswash’ their human rights record. We urge Formula 1 (F1) to implement their human rights policy to ensure their business practices don’t contribute to human rights violations.

Despite adopting this policy in 2015 following mediation with NGOs, suppression surrounding the race persists while critics remain persecuted. Last November, the detention of activist Najah Yusuf, who was tortured and imprisoned in 2017 after criticising F1 on social media, was deemed “arbitrary” by the UN Working Group on Arbitrary Detention.  Despite F1 promising to advocate for her “enforceable right to compensation”, Najah received no redress, while her 17-year old son has since been jailed in what Amnesty deem a “reprisal against his mother.”

The postponement of this year’s race due to the Coronavirus outbreak was sensible. However, F1 should demonstrate similar concern for Bahrainis negatively impacted by the Bahrain Grand Prix as they have for its participants.

We urge F1 to use maximum leverage to compel Bahrain to: end suppression of protests against the race, secure redress for victims and ensure the rights of Bahraini citizens are defended.