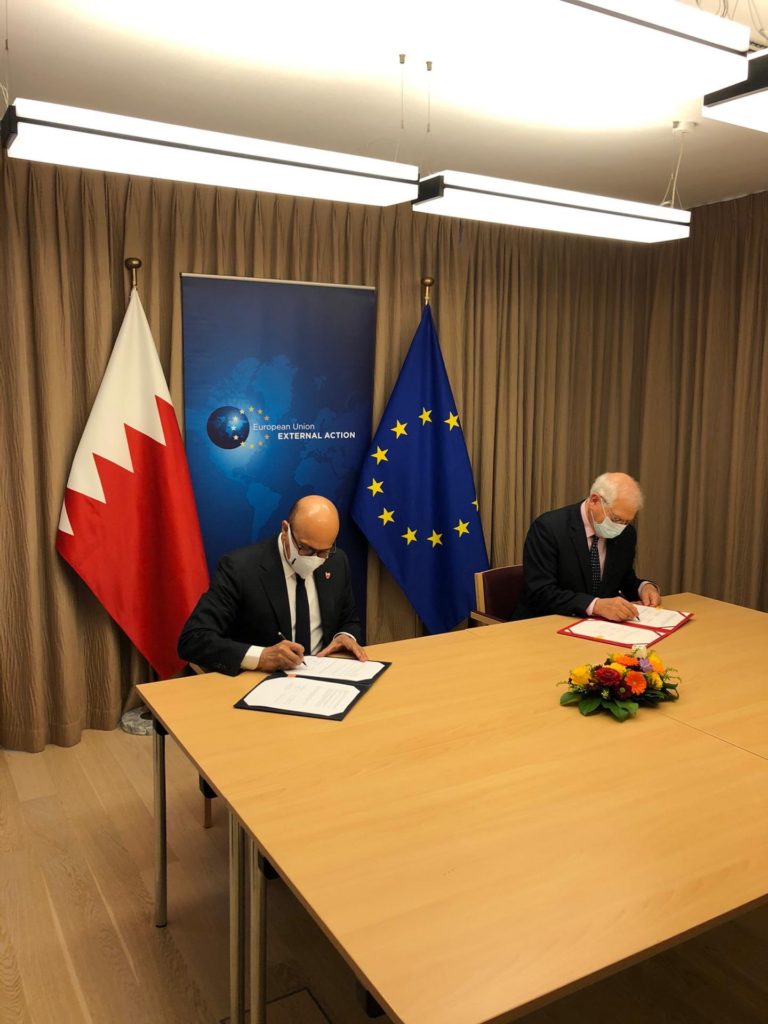 10 February 2020 – The European Union’s High Representative Josep Borrell and Bahrain’s Foreign Minister Abdullatif bin Rashid Al Zayani have signed a long-anticipated cooperation agreement, after 16 MEPs and 20 human rights groups including the Bahrain Institute for Rights and Democracy (BIRD), Amnesty International and Human Rights Watch urged the EU to emphasise human rights during meetings with their Bahraini counterparts. The agreement comes just days before Bahrainis will commemorate the 10th anniversary of the Arab Spring, during which dozens of Bahraini protesters were killed by state forces.

According to a statement published by the European External Action Service, the agreement “provides an institutional framework for political dialogue and cooperation in areas such as trade, research and innovation, clean energy and renewables.” While human rights concerns were reportedly “underlined”, there is no indication that explicit human rights conditions were placed on future cooperation. Further discussions are expected to take place at the fifth round of the EU-Bahrain Human Rights Working Group, scheduled for the near future.

Images of both representatives signing the agreement were published on social media, by Patrick Simonnet, the EU’s ambassador to Saudi Arabia, Bahrain and Oman. According to an observer from the European Council on Foreign Relations, Dr Cinzia Bianco, the action follows similar agreements with Kuwait, Oman and the UAE, while negotiations with Saudi Arabia are ongoing. EU and Bahraini officials are expected to meet later this year at the first EU-Bahrain Senior Officials Meeting, where “possibilities of bilateral cooperation will be further explored, including in support of Bahrain’s economic diversification efforts.”

Sayed Ahmed Alwadaei, Director of the Bahrain Institute for Rights & Democracy (BIRD), commented: “It is remarkable that just days before the tenth anniversary of Bahrain’s Arab Spring uprising, the EU has chosen to foster closer relations with Bahrain. The political and human rights situation in the country has deteriorated markedly over the last decade; any agreement that does not address the democratic aspirations of the people of Bahrain will not be worth the paper it’s written on.”

Husain Abdulla, Executive Director at Americans for Democracy & Human Rights in Bahrain (ADHRB), commented: “For too long, the international community has stood by while the situation in Bahrain has gone from bad to worse. If this agreement does not address the root causes of the dire human rights conditions in the country then it will prove worse than useless: a powerful PR tool for Bahrain’s dictatorship.”