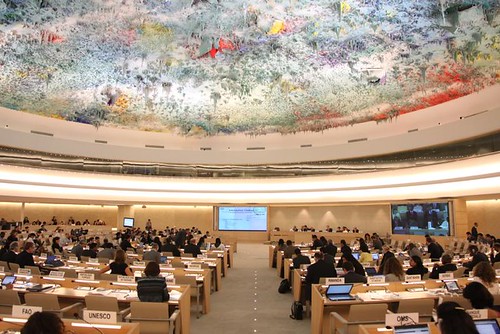 30 April 2021 – A spokesperson for the UN Office of the High Commissioner for Human Rights issue a statement today condemning “the use of unnecessary and disproportionate force” against a prisoners holding a “peaceful sit-in” at Bahrain’s Jau Prison on 17 April, calling for a “thorough and effective investigation”, for prisoners currently held incommunicado to be able to call their lawyers and families and for prisoners “detained for expression of critical or dissenting views” to be released, the Bahrain Institute for Rights and Democracy stated today.

The statement noted that riot police who entered the prison to suppress the protest “threw stun grenades and beat detainees on their heads injuring many of them.” The spokesperson continued that 33 protesters have been held incommunicado since the protest was suppressed, “in violation of both national and international law.” BIRD can confirm that an additional 27 inmates have been reported missing after being assaulted during the attack, meaning that at least 60 inmates are currently subject to enforced disappearance.

The statement added that the sit-in at the prison was held to protest against deteriorating conditions of detention following the death of Abbas Malallah on 6 April, who “died after reportedly being denied timely access to essential health care.” The UN has raised concerns about medical negligence in Bahrain’s prisons “for years,” but noted it has “become a chronic problem during the COVID-19 pandemic.”

Yesterday, 10 British parliamentarians wrote an urgent letter to UK Foreign Secretary Dominic Raab highlighting the enforced disappearances at Jau Prison and accusing the UK government of “bargaining with inmates’ lives by promoting a false narrative circulated by Bahrain” based on “unsubstantiated assurances from discredited Bahraini bodies.” Bahrain’s UK-backed human rights oversight bodies, whose independence has been questioned by the UN Committee Against Torture, have denied any wrongdoing by Jau Prison authorities.

On the same day, over a dozen families attended the US Embassy in Manama and UN Resident Mohamed Zarkani in order to deliver letters urging them to ““take immediate steps to ascertain the wellbeing and whereabouts of [their] children and family members.”

Signatories expressed disappointment at the the lack of action from President Joe Biden on human rights in Bahrain, stating that while the administration promised to “place human rights at the core of foreign policy in the Middle East”, in fact “the extent of repression in Bahrain has only intensified in recent months, with no evidence that either your embassy or the White House have taken action to curb the abuses of your Bahraini allies.”

Sayed Ahmed Alwadaei, Director of the Bahrain Institute for Rights and Democracy, stated: “The world’s foremost human rights body has now called on Bahrain to immediately disclose the fate of the assaulted inmates, while the US and UK government’s have remained silent. Human rights should never be subordinated to geopolitics; such silence will only embolden Bahrain to continue its brazen breaches of international law.

Husain Abdulla, Executive Director at the Bahrain Institute for Rights and Democracy, stated: “With international pressure mounting, Bahrain is clearly subjecting inmates to enforced disappearance after for fear that they will expose the horrific abuse they went through. Rather than attempting to conceal their failures, Bahrain should allow these inmates to call their families and launch an investigation into the torture they experrienced.”