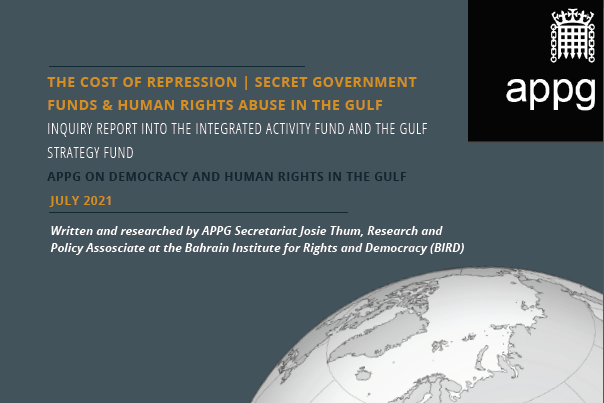 6 July 2021 – Today, a cross-party coalition of 10 MPs, including Father of the House of Commons Sir Peter Bottomley, published a groundbreaking report accusing the government of using public funds to make secretive payments to institutions that have “whitewashed human rights abuses” in the Arab Gulf and challenging the UK’s continued financial support to the Gulf Cooperation Council (GCC) states in the face of a “severe deterioration” in the human rights situation across the region.

The report, entitled “The Cost of Repression,” published by the All-Party Parliamentary Group (APPG) on Democracy and Human Rights in the Gulf and drafted by secretariat Josie Thum of the Bahrain Institute for Rights and Democracy (BIRD), is the first in-depth investigation into the UK government’s support for the six states that make up the GCC: Saudi Arabia, Bahrain, the United Arab Emirates, Qatar, Kuwait and Oman. The investigation focuses on payments made to GCC states made through the Integrated Activity Fund (IAF), which operated between 2016 and 2020, and its successor, the Gulf Strategy Fund (GSF). The total cost to the taxpayer has reached £53.4million between 2016 and 2020, according to government figures.

The report reveals that payments from both funds have been found to benefit institutions in Bahrain and Saudi Arabia that “continue to be implicated in serious human rights and international law violations”, adding that the government’s mandatory human rights impact assessments are “flawed, improperly applied and entirely absent in some cases.” MPs are concerned that the government is “at risk of complicity” in abuses and will abandon its human rights standards as Boris Johnson seeks to secure free trade agreements with GCC states post-Brexit.

Both the IAF and GSF have long faced criticism from MPs and rights groups. In the report, MPs allege the funds lack transparency and accountability and accuse the government of being “misleading and deceptive” and making “false” statements about the way the funds have been used. Internal government documents obtained via the Freedom of Information Act and featured in the report reveal that as early as August 2019 the government recognised the need to “strengthen the transparency, accountability and governance” of the IAF and recommended “a root and branch overhaul.” However, there is little to suggest that the GSF will be more transparent than its predecessor, with the government continuing to withhold key information about the fund’s beneficiaries.

Concerns have also been raised over the government’s announcement at the end of June that GSF funds have been earmarked to establish a regional “cyber ambassador” to provide “opportunities for UK companies to export cyber security products and services.” The government received heavy criticism last year when rights groups revealed that the UK had sold £75million of spyware, wiretaps and other telecommunications interception equipment to repressive states, including Bahrain, amid evidence of the widespread use of surveillance technology by Gulf states to spy on dissidents, including the murdered Saudi journalist Jamal Khashoggi.

Andy Slaughter, Labour MP for Hammersmith and APPG Vice-Chair, commented: “Millions of pounds are being taken from the British taxpayer and spent secretively in Gulf states, some of the richest nations on earth. Despite a severe deterioration in human rights in states like Bahrain and Saudi Arabia, the government continues to ignore warnings from parliament, human rights groups and their own evaluations and throw millions of pounds of public funds at institutions consistently implicated in human rights violations. This funding should be halted pending an immediate investigation.”

Josie Thum, Secretariat of the APPG and Research and Policy Associate at the Bahrain Institute for Rights & Democracy (BIRD), commented: “Despite pouring millions of pounds into Gulf states over the last five years, this report shows that UK-backed institutions continue to be implicated in appalling human rights violations, including alleged war crimes, executions and the torture of children. As they seek to deepen trade ties with the Gulf, the government must start putting people above profits and come clean with the public about how their money is being spent in the region.”