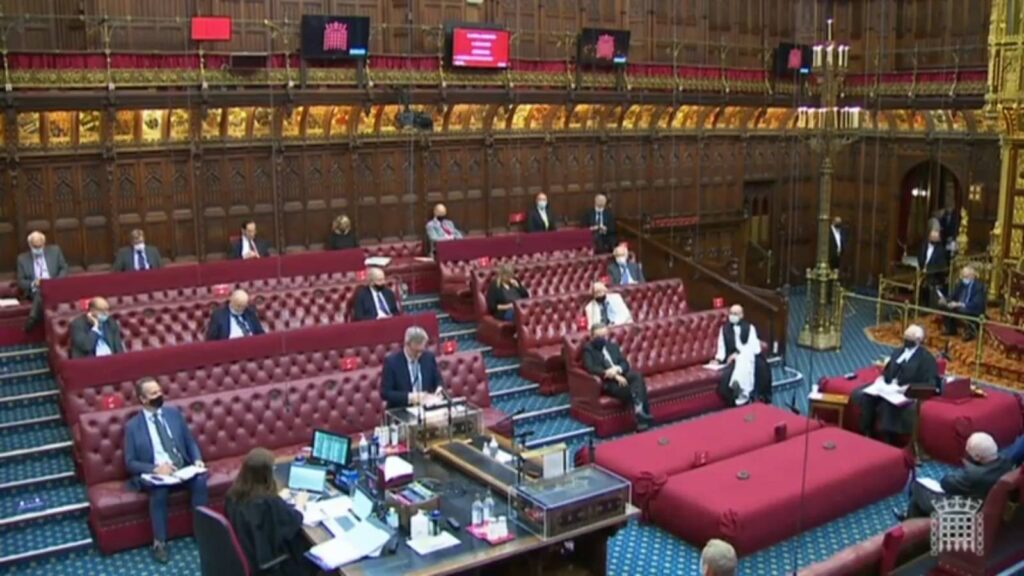 15 July 2021 – Today, the UK government was repeatedly challenged by members of the House of Lords over their relationship with Bahrain’s rulers during an Oral Session at the House of Lords on a range of issues related to human rights in the country.

The session was triggered by a question from Lib Dem peer Lord Scriven regarding a meeting in June between Bahrain’s Crown Prince Sheikh Salman bin Isa Al Khalifa and Boris Johnson. After the meeting at 10 Downing Street, after the official press release issued by 10 Downing Street after the meeting failed to mention human rights, raising concerns that human rights will be sidelined as Britain seeks closer trade ties with the Gulf. In his response on behalf of the government, Tory peer Lord Parkinson of Whitley Bay affirmed that “social and justice reforms” were raised in a meeting between the Crown Prince and Foreign Secretary Dominc Raab which took place immediately after Johnson’s meeting.

Peers went on to repeatedly challenge the government over their failure to call for the release of high-profile political prisoners Dr Abduljalil AlSingace and 73-year old Hassan Mushaima, who are serving life sentences over their leading roles in Bahrain’s 2011 pro-democracy uprising during the Arab Spring. Both men have complex medical needs and have complained of sustained medical negligence since their detention; Human Rights Watch, Amnesty International and the European Parliament have all called for their release in recent years.

In her question, Lib Dem Foreign Affairs Spokesperson Baroness Northover noted that Dr AlSingace is currently on hunger strike. His hunger strike is to protest his mistreatment by prison authorities and to demand a book he wrote in prison be returned to his family. Baroness Northover urged the government to call for his release “before it’s too late.”

Peers also raised concerns over UK-funding to Bahrain using two secret government funds, the Integrated Activity Fund and its successor, the Gulf Strategy Fund, which are the subject of a recent investigation by the All-Party Parliamentary Group (APPG) on Democracy and Human Rights in the Gulf released last week.

Former Green Party leader Baroness Bennett, an APPG member who endorsed the report, asked why the government refused to be transparent about the way public funds are used in the Gulf and asked the government to respond to the report and consider its recommendations. Lord Parkinson affirmed that the government “won’t publish further information” on the funds if it would “hinder our relationships with our international partners and hinder our ability to influence their reform efforts,” confirming the government’s intention to maintain their policy of secrecy.

Conservative Baroness Sugg asked the government to act on their commitment to make representations on behalf of political prisoners Mohammed Ramadhan and Husain Moosa, whose death sentences were upheld a year ago this month. Bahrain’s Special Investigations Unit, a UK-funded investigatory body, is accused of concealing evidence of torture against both men, leading their death sentences to be upheld.

Other issues raised during the session included a recent investigation by BIRD and Human Rights Watch into the arrest and abuse of children in Bahrain between February and March 2021, as well as the Formula 1 Bahrain Grand Prix, which has been repeatedly tied to human rights abuses in the country in recent years.

Sayed Ahmed Alwadaei, Director of the Bahrain Institute for Rights and Democracy, commented: “It is reassuring to see the UK government being challenged forcibly over their toxic relationship with Bahrain’s dictatorship during today’s oral session. However, the government’s double standard on human rights when it comes to strategic allies was on full display; this rank hypocrisy must end.”

Read the full transcript in the Parliamentary Hansard here

“House of Lords Chamber” by UK Parliament is licensed under CC BY-NC-ND 2.0