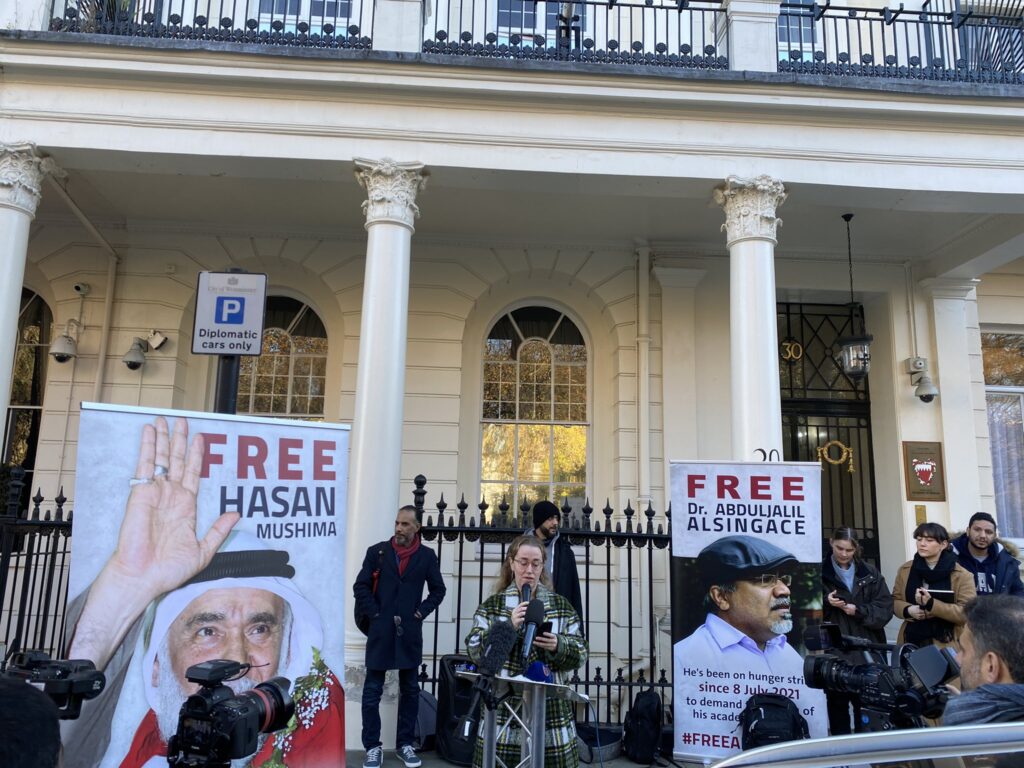 23 November 2021 – Activists, NGOs and a member of the UK Parliament gathered outside Bahrain’s embassy in London this morning to hold a press conference as imprisoned academic Dr Abduljalil AlSingace nears 140 days of his hunger strike, commemorating ten years since the publishing of the Bahrain Independent Commission of Inquiry (BICI) report into the events that took place during the pro-democracy Arab Spring movement in February and March 2011, the Bahrain Institute for Rights and Democracy (BIRD), who organised the event, stated today.

In a powerful speech, Labour MP Richard Burgon condemned the Bahrain government’s continued clampdown on civil society since the report was published, as well as the UK’s “historic friendship” with Bahrain, saying the UK government “demonstrates its utter disregard for human rights when it willfully turns a blind eye to the abuses committed by ally nations.”

Mr Burgon expressed concern on the hundreds of political prisoners currently detained in Bahrain, echoing the cross-party call for the release of detained political activists Dr AlSingace and Hasan Mushaima.  In light of July’s letter to UK Foreign Secretary Liz Truss, Mr Burgon criticised Bahrain’s role in the medical negligence of hundreds of political prisoners, saying that “we are here today to shine a light on these violations, to condemn them in the strongest terms and to tell Bahrain that they will not be tolerated.”

Mr Burgon was followed by Katie Fallon of Campaign Against Arms Trade (CAAT), who spoke of the UK’s role as an active participant in arms deals with Gulf Countries such as Bahrain and Saudi Arabia and, by extension, its complicity in human rights abuses in the Gulf. In the same decade since the publishing of the report in Bahrain, Ms Fallon continued, the UK profited from over £120 million worth of arms sales to the country.

The BICI report’s findings were highlighted by Agnese Boffano of BIRD, who pointed to the Bahraini government’s excessive use of force to clamp down on the 2011 uprisings that led to the death of 46 people and the torture of 559 others. Ms Boffano also shared updates on Dr AlSingace’s case, noting that his confiscated research had now undergone a legal review and had been determined to be apolitical but that Bahraini authorities continued to refuse to release his academic work to his family. As Dr AlSingace approaches 140 days of hunger strike, family members told BIRD that he was given an oxygen mask as his oxygen levels dropped due to shortness of breath, that he had unusually cold hands and appeared to be in a fragile state.

The press conference ended with commentary from Ali Mushiama, the son of leading opposition activist Hassan Mushaima, who condemned Bahrain’s attempts to discard reports like the BICI by whitewashing its human rights abuses through international events such as the Manama Dialogue that took place last weekend. After a week-long sit-in in front of the Bahrain Embassy, Ali also announced that he would launch a hunger strike starting later this week “to demand [Dr AlSingace’s] release and the release of [his] father Hassan Mushaima and all prisoners of conscience in Bahrain and to prove to you that the propaganda of coexistence and tolerance that the regime loves to talk about is a failed fantasy.”

The BICI was a fact-finding body established by the King of Bahrain Hamad bin Isa AlKhalifa tasked with investigating the events that took place during Bahrain’s pro-democracy Arab Spring movement in February and March 2011. Published on the 23rd of November of the same year, the report documented the death of 46 individuals, the alleged torture of 559 others and the dismissal of over 4,000 employees for merely participating in the protests. The BICI concluded that the Bahrain state police had, “on many occasions, used force and firearms in situations where this was unnecessary and in a manner that was disproportionate.” It also determined that these human rights abuses “could not have happened without the knowledge of higher echelons of the command structure.”

The 500-page report based on 9,000 written complaints and over 5,000 interviews clearly documents how Bahraini security forces chose to react unlawfully and violently to the 2011 pro-democracy movement by arbitrarily arresting activists, human rights defenders, academics and civilians. It also found that security officers not only fired shot guns when there was no immediate danger but fired their weapons without ensuring that individuals would not be fatally injured. Tear gas was found to be excessively used compared to the size of the demonstrations and was deployed in private homes. The authorities’ first victim was Ali Abdulhadi AlMushaima who was fatally shot on the 14th of February 2011.

Dr AlSingace is a 59-year-old academic and blogger currently imprisoned at Bahrain’s notorious Jau Prison, after being handed a life sentence by a military court for his leading role in Bahrain’s 2011 pro-democracy uprising during the Arab Spring. Since being imprisoned, the international community has made consistent calls for his immediate and unconditional release, including Human Rights Watch, Amnesty International, the Bahrain Institute for Rights and Democracy and American, British and European legislators.

Dr AlSingace has several chronic illnesses, including post-polio syndrome and a musculoskeletal condition, requiring the use of crutches or a wheelchair, making his hunger strike particularly detrimental to his health. As he approaches 140 days of his hunger strike, family members told BIRD that the visits by his doctors have become sparse, with doctors only seeing him once every two or three weeks, and his access to medication and pain relief products have been delayed despite repeated requests. Contrary to his requests, police remain present in his hospital room 24/7, including while he sleeps and during family visits.