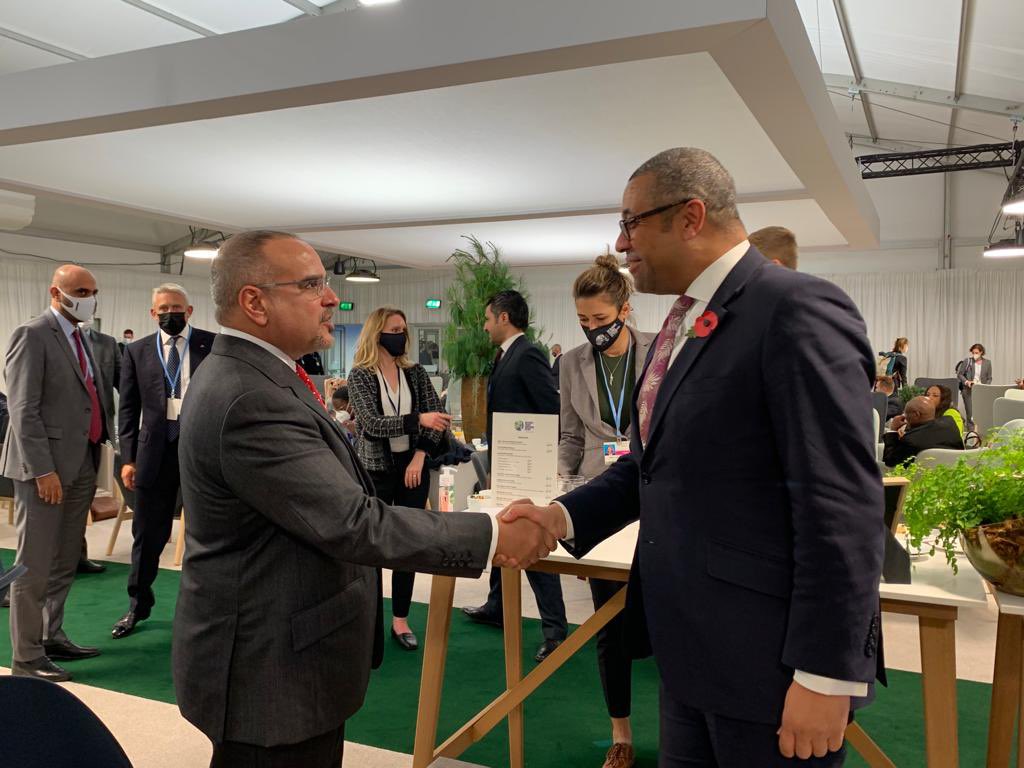 The letter was sent ahead of the Crown Prince’s speech at Cop26 during which he outlined his government’s plans to achieve net-zero carbon emissions by 2060. However, signatories warned that this commitment is “undermined” by Bahrain’s support for the Saudi-led coalition in Yemen which has caused “significant damage to Yemen’s natural environment” and killed or wounded an estimated 20,000 Yemeni civilians since 2015.

The group also questioned Bahrain’s recent support for UN motion recognition of the right to “clean, healthy and sustainable environment”, expressing concerns that political prisoners in Bahrain are subjected to systematic medical negligence and are kept in notoriously unsanitary and overcrowded conditions” which likely contravene that right.

They pointed specifically to the case of jailed Bahraini academic Dr Abduljalil AlSingace, who reached his 120th day on hunger strike today, after more than 10 years behind bars. Dr AlSingace launched his hunger strike on 8 July in protest at ill treatment and the confiscation of his academic research, has since lost at least 20kg and family members report his health is deteriorating. MPs called on the Crown Prince for the “immediate return” of Dr AlSingace’s research.

Baroness Bennett of Manor Castle commented: “The war in Yemen has devastated Yemeni society and its unique and fragile landscape and heritage. Boasting about your green credentials while backing a coalition that bombs agriculture and water resources is textbook greenwashing; until concrete steps are taken to bring the conflict to an end Bahrain’s claims of work towards a green vision should not be taken seriously.”

Lord Scriven commented: “Demanding the release of Dr Abduljalil AlSingace, who has been forced to starve himself for almost 120 days simply to secure the return of his academic research,  for the Foreign Secretary, Liz Truss. However, true to form she is more bothered about posing for photos with Bahrain’s Crown Prince at Cop26. This unhealthy relationship is only empowering Bahrain’s leaders as they trample on human rights and abuse prisoners.”

Sayed Ahmed Alwadaei commented: “The policies of the Crown Prince’s government have seen thousands thrown in prison and torn families apart, including my own. By cosying up with Bahrain’s Crown Prince at Cop26, UK ministers are helping rehabilitate Bahrain’s tarnished reputation while continuing to supply the weapons they are using to destroy Yemen and training they using to oppress citizens at home”

We are writing in light of your attendance at the COP26 summit in Glasgow this week and your government’s recent commitment to achieve net zero carbon emissions by 2060 to urge you to ensure that addressing external conflicts and promoting human rights plays a central role in your sustainable development strategy.

We fear that your commitment is undermined by your continued participation in the Saudi-led military coalition waging war in Yemen, whose bombing campaign has caused significant damage to Yemen’s natural environment. As the U.S. Secretary of State recently stated to the UN Security Council, climate change is exacerbating the conflict in Yemen, with implications for our collective security. Environmental ramifications of the war include the destruction of ecosystems, the production of pollution and toxic dust and soil and water contamination. This has led to unprecedented and protracted impoverishment and disease in Yemen, contributing to the forced displacement of 4 million people.

Beyond the impact on the natural environment, the continued conflict in Yemen also had a devastating effect on Yemen’s population. Not only have coalition airstrikes killed or wounded an estimated 20,000 Yemeni civilians since 2015 according to the UN, research by the Washington Post suggests that the coalition has been responsible for 67% of attacks on infrastructure in Yemen between 2011 and 2019. This has included the deliberate bombardment of Yemen’s agricultural sector, severely exacerbating food shortages and pushing nearly 5 million of Yemenis to the brink of famine, as well as the deliberate destruction of health, sanitation and water infrastructure, in possible violation of International Humanitarian Law and despite Yemen being among the most water insecure nations on earth.

Should this reckless bombing campaign continue, it will cause irreparable damage to Yemen’s environment. Continued participation in the conflict will thus be in direct contrast to calls made by the UK Foreign Minister yesterday at COP26 for world leaders to deliver “clean, honest and reliable infrastructure to the developing world”. On the occasion of COP26, and ahead of this week’s UN International Day for Preventing the Exploitation of the Environment in War and Armed Conflict, we thus urge you to commit to ending Bahrain’s participation in this devastating military campaign and amending your net zero commitment.

Furthermore, we contend that your aim of promoting sustainable development that “supports future generations” depends on the realisation of a free, open and democratic society in Bahrain. Last month, Bahrain supported UN Human Rights Council resolution 48/13 recognising the human right to a “clean, healthy and sustainable environment” for the first time. Following the resolution, UN High Commissioner for Human Rights, Michelle Bachelet, stressed that the right “to participation, access to information and access to justice” are essential elements of the right to a healthy environment and further stated that “a balanced, human rights based approach to sustainable development must be ensured.”

We thus urge you to seize the opportunity to address the crisis of political representation in your country by releasing political prisoners, including opposition leaders, death row inmates, journalists and other civil society figures. We are concerned that political prisoners are subjected to systematic medical negligence and are kept in notoriously unsanitary and overcrowded conditions, in likely contravention of their right to a healthy environment and the UN Standard Minimum Rules for the Treatment of Prisoners.

According to the Bahrain Institute for Rights and Democracy (BIRD), there are approximately 1400 political prisoners in Bahrain, and the country imprisons its population at the highest rate of any Arab country in the region. This includes those opposition leaders convicted in the ‘so-called case of leading activists’, who have spent over a decade in prison for their leading roles in Bahrain’s 2011 Arab Spring protests. We are particularly concerned that academic and human rights activist Dr Abduljalil AlSingace has now been on hunger strike for over 118 days to protest ill-treatment and the confiscation of his academic research to which he dedicated over four years of work. Since launching his hunger strike on 8 July 2021, Dr AlSingace has lost over 20kg and last week his blood sugar levels dropped to dangerously low levels.

In light of the above, we respectfully request that you consider taking the following action: