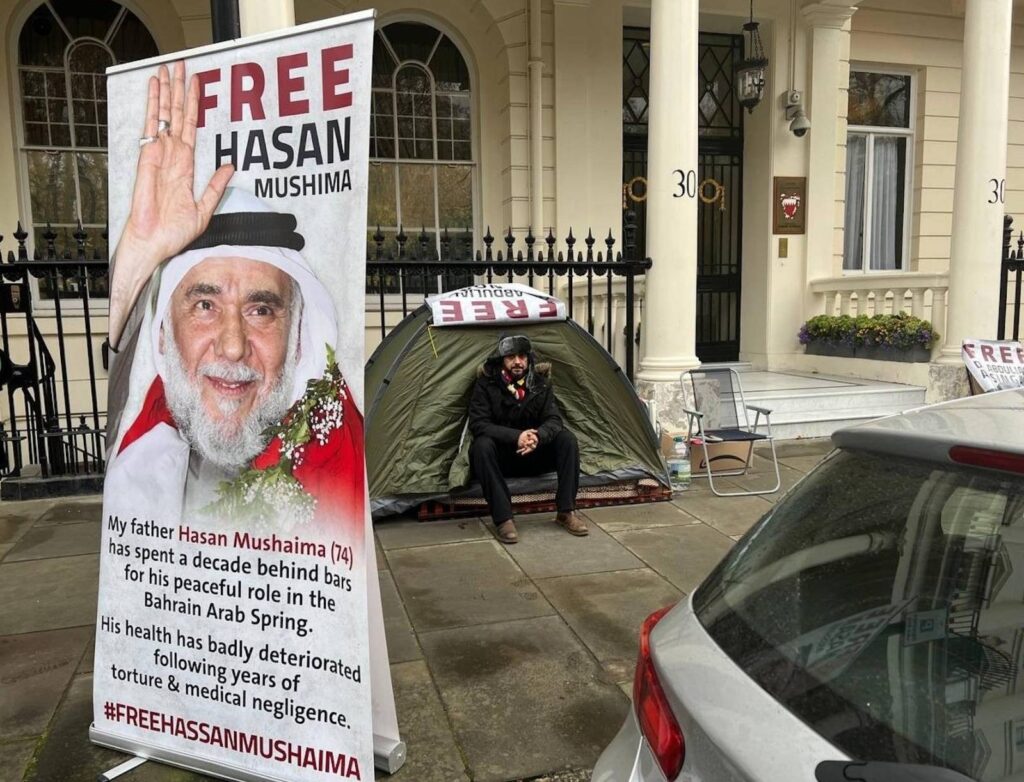 2 December 2021 – Today, Bahraini activist Ali Mushaima has  entered his second week of a hunger strike in solidarity with detained academic Dr Abduljalil AlSingace and his father, imprisoned opposition leader, Hassan Mushaima, in Bahrain. Ali is protesting outside the Bahrain Embassy in Belgrave Square, London. His hunger strike began on Thursday, 25th of November, and he has been camping outside the embassy in spite of the freezing temperatures and strong winds of the British winter. Ali has already lost 5kg.

Compelled to resort to drastic measures, Ali is trying to save the life of distinguished Bahraini scholar Dr Abduljalil AlSingace, who is on his 148th day of hunger strike demanding that research he wrote by hand over four years be returned to his family, after it was confiscated in April 2021 by prison authorities in Bahrain. Dr AlSingace has lost over 20kg, and family members report he is appearing increasingly frail, and is cold to the touch; he is suffering from various vitamin deficiencies and has experienced shortness of breath and seizures since beginning his hunger strike. Authorities recently punitively suspended his video calls. Dr AlSingace has spent over a decade behind bars since he was arrested and tortured for his peaceful role in Bahrain’s Arab Spring in 2011.

Ali’s 74 year-old father, Hassan Mushaima, has been in the same medical facility as Dr AlSingace since July. Hassan Mushaima is in remission from cancer and suffering from diabetes and related complications, including swelling in his legs and feet, causing extreme pain and inhibiting movement. He has also lost the ability to hear in his right ear partly due to torture. Mushaima was a leading figure of Bahrain’s opposition movement and was tortured and sentenced to life imprisonment in 2011.

Since their imprisonment 10 years ago, cross-party members of the UK Parliament, leading NGOs including Amnesty International, Human Rights Watch and Bahrain Institute for Rights and Democracy have called for the immediate and unconditional release of Dr AlSingace and Hassan Mushaima. But as both men’s health continues to deteriorate dangerously, Ali has decided to launch his hunger strike now in order to demand that the UK and Bahraini governments take urgent action to put an end to these dire situations.

Ali Mushaima commented: “I cannot simply wait and do nothing, fearing for the day when I will receive a call saying that my father, Hassan Mushaima, or Dr AlSingace have died in custody. I’ve made attempts to work with human rights organisations, MPs and diplomats without any progress. Although it is difficult to sleep in the cold every night away from my family, I felt it was time to take matters into my own hands and demand that the UK act to save AlSingace, and release him along with my father and all political prisoners in Bahrain, once and for all.”

Sayed Ahmed Alwadaei, Director of Advocacy for Bahrain Institute for Rights and Democracy, commented: “I salute the courage, bravery and determination that Ali is showing in this freezing weather, all in order to shed light on a decade of injustices inflicted upon Dr AlSingace and his father, Hassan Mushaima. This is his attempt to save the life of Dr AlSingace, who is nearing 150 days on hunger strike. For Ali, this is a last resort to save their lives. Ali’s brave action can only work if people care and express their support and solidarity.”

This is not Ali Mushaima’s first hunger strike. In 2018, Ali succeeded after 44 days of a hunger strike and after losing 16kg, in securing life saving medication for his elderly imprisoned father. Despite this, hundreds of political prisoners including Hassan Mushaima and Dr AlSingace continue to be subjected to medical negligence and inhumane treatment at the hands of the Bahrain government.

The decade-long abuse of human rights in Bahrain has been allowed to continue unhindered due to the complicity of allied countries such as the UK, which continues to arm and support the regime. In July, a parliamentary report revealed that the UK government has channeled over £53 million of taxpayer’s money to Gulf regimes including Bahrain in a secretive funding scheme that places the UK “at risk of complicity” in human rights abuses in the country.