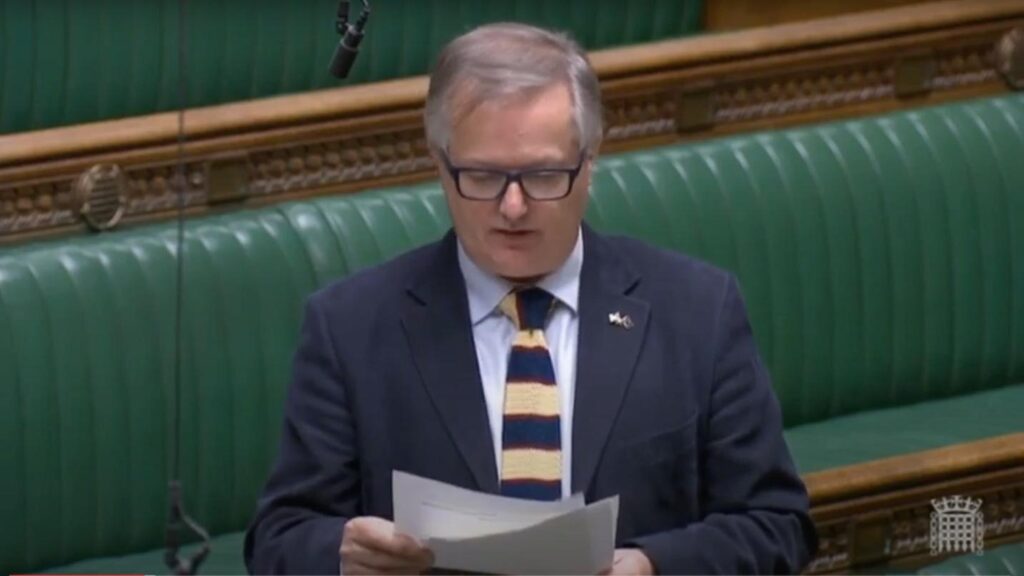 13 January 2022 – Today, a Backbench Business Debate on the ongoing detention of Bahraini political prisoners took place in the Chamber of the House of Commons, where cross-party MPs scrutinised the UK government’s role in the plight of political prisoners and made demands on MENA Minister James Cleverly MP to take action, the Bahrain Institute for Rights and Democracy (BIRD) stated today.

The debate was led by Brendan O’Hara MP, Chair of the All-Party Parliamentary Group (APPG) on Democracy and Human Rights in the Gulf and SNP Spokesperson for International Human Rights and Conflict Resolution. Key issues discussed included the cases of high profile political prisoners, such as Dr Abduljalil AlSingace and Hassan Mushaima, as well as concerns over religious freedom and Bahrain’s perpetration of medical negligence, torture and the death penalty. The rights implications of UK funding to Bahrain through the Gulf Strategy Fund (GSF) and an upcoming Free Trade Agreement with Gulf Cooperation Council states were also discussed.

MPs further highlighted the role of Bahrain’s Minister of Interior, Sheikh Rashid bin Hamad AlKhalifa, with Alistair Carmichael MP, Liberal Democrat criticising top UK government officials, including Priti Patel and the UK Ambassador to Bahrain, Roderick Drummond, for meeting with the Interior Minister despite his “responsib[ility] for the bloodiest days of the crackdown in 2011” and his role in overseeing a culture of impunity and “appalling” human rights violations in the country. These concerns were echoed by SNP MP, Patricia Gibson.

The only person to speak out in defence of Bahrain’s human rights record was the Conservative, Bob Stewart MP, just days after the Middle East Eye revealed that he enjoyed a paid trip to Bahrain worth over £5,000 – during which time he met with Bahrain’s Minister of Interior – something that he failed to declare during his intervention in the debate.

Shadow Minister for the Middle East and North Africa, Bambos Charalambous, called on the government to publicly condemn torture victims’ death sentences, establish an independent inquiry into the GSF and call for a political reform process that “includes the release of imprisoned civil society leaders”. Conservative Father of the House, Sir Peter Bottomley, highlighted Bahrain’s exclusion of political prisoners from prisoner releases, stating: “on Bahrain National Day, there is usually an amnesty, and the human rights organisations asked that some of the political prisoners be included. None were”.

Furthermore, former Opposition Leader, Jeremy Corbyn praised Lewis Hamilton for using his platform to highlight human rights abuses in Bahrain, and said that the “best response” from Formula 1 will be for them to “refuse to go countries where there are significant human rights abuses”. Corbyn went on to read out remarks by Labour MP Richard Burgon which raised the case of Bahraini political prisoner, activist and torture survivor, Ali AlHajee.

At the close of the debate, Brendan O’Hara denounced James Cleverly’s response to MPs, stating: “in a debate about the detention of Bahraini political prisoners, the Minister did not once in his speech mention the names of Dr Al Singace, Hassan Mushaima or any of the other prisoners who have been mentioned”. James Cleverly defended the UK’s funding scheme to Bahrain, promising that “[w]e will continue to hold frank and sometimes difficult but constructive discussions with our counterparts in Bahrain”, and went on to say, “[w]e commend the progress that [Bahrain] has made on human rights”.

The debate was immediately followed by a press conference outside the Bahraini Embassy in London, attended by Brendan O’Hara and Jeremy Corbyn, along with activists and NGO representatives. The MPs spoke to media representatives of their ongoing concerns over human rights in the Gulf nation and vowed to continue scrutinising the UK government and pushing for the respect of human rights in Bahrain. 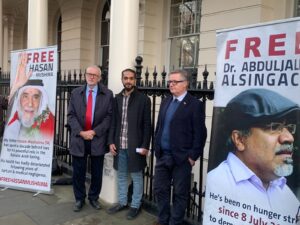 Sayed Ahmed Alwadaei, Director of the Bahrain Institute for Rights and Democracy (BIRD) commented: “It was brilliant to see unified support at today’s debate, with cross-party MPs raising the plight of political prisoners in Bahrain. MPs were right to denounce the culture of impunity presided over by top Bahraini officials, including Interior Minister Sheikh Rashid AlKhalifa, and I echo their call for Magnitsky Sanctions to be applied. The UK’s funding to abusive regimes was placed under heavy scrutiny, and MPs demanded the UK take action on the cases of Dr Abdulajlil AlSingace and Hassan Mushaima. The government must change their disastrous policy toward Bahrain, which has clearly failed and is no longer sustainable.”